A Q&A; with the Hollywood legend and self-proclaimed Wii-addict on bringing his cinematic flair to videogames 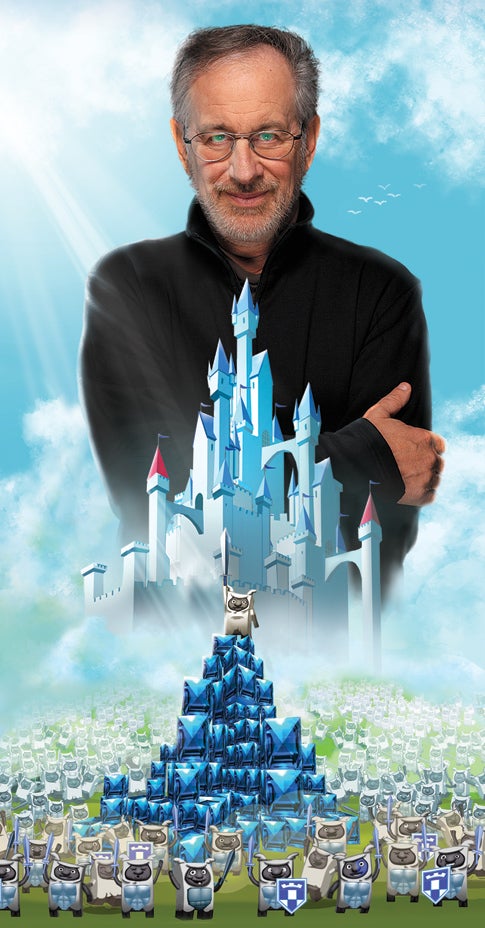 In a career that spans the heartrending drama of Schindler’s List, the popcorn thrills of Indiana Jones and the flat-out cartoon silliness of Animaniacs, Steven Spielberg has demonstrated a unique cross-generational ability to capture our imaginations and manipulate our emotions. Now he’s applying these talents to a new medium, developing a series of innovative videogames in collaboration with Electronic Arts.

The first, Boom Blox (released last month), embraces his fun-for-the-whole-family side. This action-puzzle game challenges players to destroy structures made of building blocks, using the Nintendo Wii remote control to hurl onscreen objects with a flick of the wrist.

(The special effects make it irresistible to kids, of course, but we had to be politely asked to surrender the controller and let someone else play during our preview.) Next up is a more ambitious undertaking, a highly secretive project that promises to push the boundaries of gaming to an emotionally arresting level. We caught up with Spielberg to talk about the strange allure of knocking stuff down, the future of videogames, and what it takes for a world-famous director to get his kids’ attention.

Q. What was the inspiration for Boom Blox?
A. All the time I spent playing with my children during their early years, which really amounted to nothing more than building things from blocks and knocking them down and then building them up again. So this game came in a moment of frustrated inspiration. Nowadays, as evidenced certainly in my house, there’s a large abyss between the games parents play and the games kids play. We rarely play videogames together. I thought this could be one opportunity where kids would get so excited, they would invite their parents into the middle of their game play. 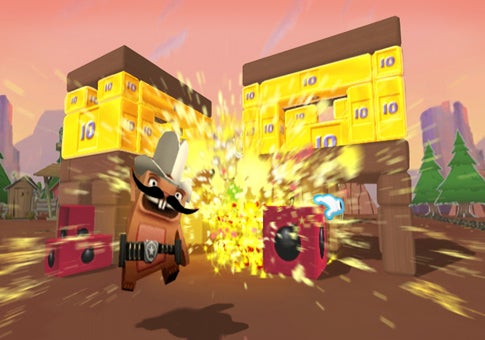 Q. The cross-generational appeal ties in well with the Wii platform.
A. Yes, because the Wii is experiential, in that there’s cause and effect. I know there’s cause and effect in using your thumbs, but there’s really a feeling of verisimilitude when you are actually able to swipe a controller through the air and see an instant result, which is very gratifying, even if that only means knocking down a pile of blocks.

Q. Do you find your kids’ perception of the game different than your own?
A. At first my kids just liked knocking things down. They didn’t concern themselves with the points you can gain. They got right into how cool
it is when the blocks hit the ground and explode in different colors or smoke patterns and pieces of beautiful glass and even fireworks. So right away, they got into the excitement of the cinema of the game. The very next thing they figured out was, Oh, wait a second—this is competitive. I can play against the AI, or I can play against three friends, or even against my dad and mom.

Q. How do you think your approach differs from the typical game developer?
A. This game isn’t a great test of that, but the next game we’re working on is much more of an exercise for my movie muscle. It involves more storytelling and emotionality. It will evoke more empathy for the characters. That’s the new frontier in gaming.

Q. Has gaming influenced your movies?
A. There are certain similarities, but I don’t think it has necessarily brought me to a better understanding of how to create an action set piece. What it has done is make available to me, as a producer, so much cinematic talent from the videogame world. The people who put together the cut scenes and the prologues to big fighting games—some of the graphic design and lighting and just appetite for the spectacular—outdistance movies as we know them. So I’ve found a lot of talented young filmmakers who work on videogames today.

Q. How do you see gaming changing in the next few years?
A. Hopefully, we’re headed toward games that address an emotional remoteness in gaming today. Videogames push the adrenaline button but don’t really create a bond with a character, or a real sense of caring about the outcome of a character leading you through the game. That’s where the movie industry has it over the game industry. Most films are stories that are full of surprises, and the audience just sits and lets the experience wash over them. Whereas with videogames, you’re so busy waving your arms or using your thumbs and standing on your feet and leaning forward, there’s so much body language and adrenaline that it blocks any chance to have a feeling about a character. The other thing that’s coming down the line is, eventually, we’ll never have to use our hands again. Our eyes, and even vocalizations or complete conversation with the platform, will control the game. That will be the next technological breakthrough.