Girls Just Want to Have Fun

With women's passion for gaming skyrocketing, why aren't more developers playing along? 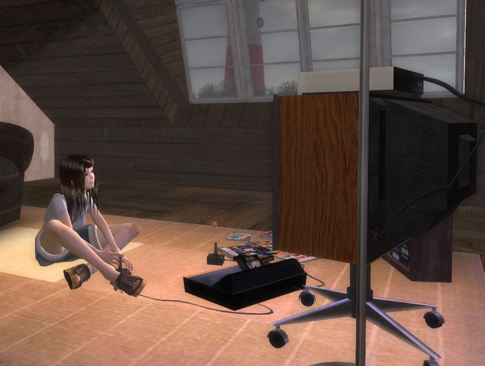 According to the Entertainment Software Association, 40 percent of video game players are female, while women over 18 represent a larger built-in audience than even teenage boys. But where are the titles which speak to this diversity, and intelligently at that? One glance at store shelves and online portals — crowded by childish outings (My Fashion Studio), self-help programs (Jillian Michaels Fitness Ultimatum 2009) and cutesy diversions (Diaper Dash) — and it’s hard to tell. So we asked insiders: What’s keeping more developers from getting in touch with their feminine side?

“Obviously, publishers are playing to stereotypes,” explains Hailey Bright, co-host of Coin-Op TV. “Not every woman’s obsessed with being fit, pretty, or Little Miss Perfect. In fairness though, many women are always striving to be something they’re not, which is why personal improvement titles tend to be so popular. Thanks to magazines, television shows and Hollywood, from grade school on, women are made to question their self-image.” Translation: Blame pop culture for creating a climate in which these sorts of software packages can flourish.

In fairness though, others argue that the pendulum swings both ways. “Scanning the shelves, you’d think all men were heavy metal fans with a penchant for blowing crap up,” says Challenges for Game Designers author and SCAD professor Brenda Brathwaite. “I actually applaud the industry’s efforts to expand its horizons. My hat’s off to game makers for trying new things… it’s nice for women to at least now have some options.”

“Developers have listened to all the screaming that gaming chicks have done over the last five years, and you can see the results in the games being published today,” agrees Kat Hunter, former professional gamer and eSports manager. “However, that will never change the fact that little girls are little girls and really like pink. While I encourage women to explore all aspects of gaming both competitive and casual, I was also a primary caregiver for a little girl for the last five years, and she would love Imagine: Teacher and Gardening Mama.“

Still, Bright suggests that what women really want is to feel more empowered, and be offered the choice of playing heroines whose resourcefulness trumps their cup size. Some would also point out the commonly-cited credo that females prefer more storytelling and characterization.

Brathwaite, however, disagrees. “Far more women play casual games than have ever touched an adventure title,” she points out. “If women truly love them so much, why is the genre dying?”

As for the thorny issue of the potentially negative psychological impact of titles that fall so clearly within customary gender roles and philosophical lines, those surveyed say it isn’t cause for alarm.

“I’m in possibly the most unconventional situation possible: My husband’s a former CEO and stay-at-home dad; my daughter wants to grow up to be a game designer; and then there’s my own background [designing games like Playboy: The Mansion],” points out Brathwaite. “Yet despite living in a household that reinforces his ability to grow up to be anything he wants, all my three year-old son wants is cars and things that explode. I really don’t see women being forced to play only certain titles either… The industry is just offering them another option.”

Nonetheless, everyone we spoke with concurs that, given the field’s current state, a little more variety and sensitivity going forward couldn’t hurt in terms of bridging the gender gap, and showing proper respect towards everyone’s feelings.

“I’m sure someone thinks the concept of a game like [upcoming downloadable PlayStation 3 title] Fat Princess is funny, and it’s all done in good sport,” says Bright. “But lots of women struggle with weight issues, and wanting to be something they’re not. Games like this ultimately do little to speak to a female audience, and aren’t going to make anybody feel good about themselves in the end…”