Do More with the PSP

With a few simple steps, this shiny beast can play your favorite TV shows and run free arcade classics 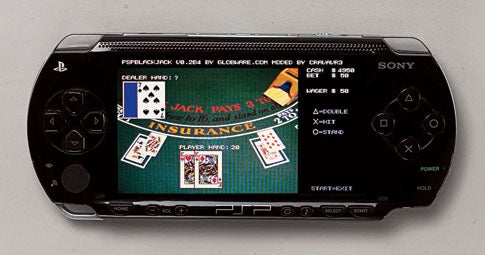 No thanks to Sony, which is notorious for limiting the functionality of its products with proprietary formats and restrictive protections, the PlayStation Portable is now the must-have gadget of the year, even
for those whose lives don´t revolve around the latest first-person shooter. The gorgeous device feels good in your hands, has a stunningly sharp screen, and plays some pretty sophisticated games. It took a bunch of amateur programmers, though, to invent tools that unlock the PSP´s full potential as a portable media powerhouse. Below, learn how to convert any video file-whether home movie, free trailer or recorded TV show-to play on the PSP. (Converting your DVDs is legally murky, although the same programs will do it.) Then turn the page to see how to run free games, such as Tetris and Pac-Man clones, from the PSP´s
Memory Stick. But that´s just the beginning. Now that the PSP has been cracked, new tricks are popping up every day. Head to popsci.com/h20 to see the latest creative uses for this multitalented device.

HOW TO: WATCH ANY VIDEO FILE

2) Download the free
application PSP Video 9 (pspvideo9.com) or, if you´re on a Mac, ffmpegX (free; homepage.mac.com/major4). Both convert any .avi, .mov, .mpg or .wmv file to play on your PSP. Other options: iPSP ($20; ipsp.kaisakura.com), available for Mac and PC, which also loads your digital photos and music files, and the Windows-only XilisoftDVD to PSP Suite ($45;
xilisoft.com), which lets you convert a whole DVD or just selected parts.

3) Open your converter program and adjust the settings. Leave the resolution at 320×240, but choose a setting that uses 15 fps
(instead of 30 fps) to fit two hours of video on a 512-megabyte Stick.

4) Attach your PSP to your computer with a USB cable or put your Memory Stick in a card reader to transfer your converted file.

HOW TO: PLAY FREE ARCADE GAMES

Since the day Sony released the PSP, hackers have been trying to make it run homebrew applications from the Memory Stick, and they´ve finally succeeded. The basic games these amateur programmers create aren´t meant to supplant the big-budget commercial titles, just to give you a free alternative. So far, only a few PSP-specific homemade games exist, but you can also run emulators that let you play games designed for other systems, such as the Game Boy or Super Nintendo. Best of all, these games are tiny (usually less than 50 kilobytes), so you can keeps dozens loaded on your PSP.

Pocket Arcade
Tetris and Pac-Man and classics such as blackjack are clones are among the first free homebrew games built for the PSP.

3) Open KXploit . In the Name box, type a name for the app file you want to load-SNES, for example, for the emulator.

4) Click the â€ . . . â€ button and navigate to the folder you downloaded, then to the SNES folder, and select the EBOOT.PBP file inside. (Homebrew PSP apps are all called EBOOT.PBP.)

5) Connect your PSP to your computer and select it from the drop-down menu (it´s often drive e: or f:).

6) Click the “Generate files” button. This will create two folders-called,
in our example, SNES and SNES%-on the Memory Stick inside PSP > Game. Now put the SNES games (.smc files) in the SNES% folder.

7) Unplug your PSP and navigate to Game, then to Memory Stick, and select the Launcher app. Go to the SNES% folder to choose a game.

8) To load other games, such as PSPTetris, repeat steps 3 through 6 using a new name and the EBOOT.PBP file for that application.

1)Browse the Web Sony´s latest firmware (version 2.0) includes a Web browser, but updating your PSP could cripple the homebrew hack above. Instead use the Downloads function of the commercial game Wipeout Pure (and a simple
settings change on the PSP) to surf anywhere on the Web at any hotspot. Learn more at popsci.com/h20.

2) Get RSS feeds MioMediaBox (free; mioplanet.com) is a Windows app that converts RSS feeds into PSP-compatible images and transfers them to your Memory Stick when you connect your PSP to your PC.

3)Read eBooks Turn any text file into an eBook you can read on the PSP with PSPphoto (free; tokyopia.com).