Missing in action, under the radar, behind a secret door: seek them out 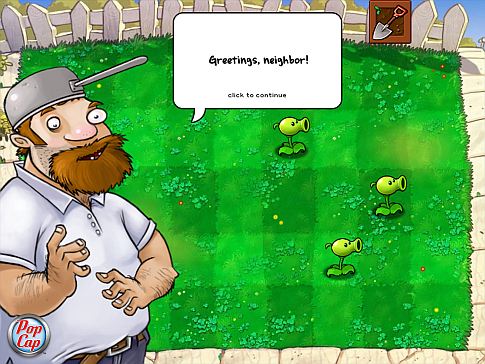 Played a lot of Zubo lately? Logging in tons of time with Prinny: Can I Really Be the Hero? Chances are, probably not. But as a recent spate of under-the-radar PC and video game gems are quick to remind, sometimes the most compelling titles aren’t the ones splashed all over your TV or local GameStop.

For example: PC outing Plants vs. Zombies, which hardly seems an obvious choice for strategy fans. But the downloadable epic — demanding you use sunflowers, cherries and potatoes to keep shambling cadavers from invading your garden — doesn’t just boast a great sense of personality and attractive hand-drawn visuals. It’s also incredibly deep, and one of the simplest to learn, yet hardest to master tactical combat challenges we’ve ever encountered.

A kinder, gentler alternative that combines platform-hopping action with simple pattern-matching mindbenders, fellow handheld outing Henry Hatsworth in the Puzzling Adventure instead bridges the gap between casual brainteaser and reflex-intensive arcade smash. Handling like the secret love child of Mega Man and Bejeweled, its sprawling quest — combining split-second leaps, epic boss fights, and a Saturday morning cartoon aesthetic — proves uniquely engaging. Where else does an animated English explorer, complete with monocle and pith helmet, get the chance to squirt crackling energy bolts from his blunderbuss or pilot a laser-spewing mech?

As for traditional set-top console owners, dozens of Internet-retrievable outings (Bomberman ’94, Flock, Comet Crash, etc.) provide a great counterpoint to traditional boxed offerings. But we did find a couple of shrink-wrapped surprises too. See chintzy, yet strangely addictive God of War clone Ninja Blade; ostentatious grappler Legends of Wrestlemania; and Wii-enhanced ports of previously-released titles like arcade romp Klonoa and rhythm game Donkey Kong: Jungle Beat. In the latter case, all prove weekend rentals at best, but clearly illustrate that there’s still life outside of the Top 10 Bestsellers list yet.

Comb a handy bargain bin, or dig back a year or two on discount game sites, and you’ll find countless additional bombshells beyond the usual surprises from niche publishers such as Atlus and Hudson. With thousands of titles released each year, it’s inevitable that several diamonds in the rough always slip through the cracks, to await the discovery and enjoyment of intrepid treasure hunters just like yourself.