Reshape creation in your own image with Spore 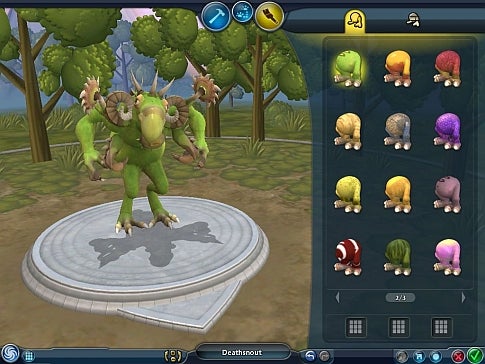 Certain moments, a man never forgets: graduations, weddings, the birth of his first slavering Scuzzraptor. Electronic Arts’ Spore, a 3D Petri dish that allows evolution of custom-made creatures from unicellular microbe to space-faring conqueror, does for Darwinism what Super Mario Bros. did for magic mushrooms. When connected online, the game silently uploads and catalogues personalized beasts, buildings, and vehicles in a central database. It then grants creators virtual immortality by using the creations to populate fellow players’ worlds.

Spore is the brainchild of legendary designer Will Wright (The Sims), poster child for an entire generation of joystick-addled MENSA dropouts since 1989’s SimCity. On the one hand, the outing represents a watershed moment for user-generated content, allowing you to give birth to nearly any organism the mind can conceive. But seven years in the making, nearly five times the average 18-month game development cycle, Spore also serves as the genesis for a host of technological breakthroughs.

Play itself is subdivided into five distinct phases (cellular, creature, tribal, civilization, and spaceflight) ranging from protozoa-gobbling arcade challenges to 3D real-time empire-building affairs. Each pays homage to a genre classic. For example, initial tidal pool scenarios resemble a hallucinogenic Pac-Man, or more cartoonish fl0w, for all you hipsters out there. Grow a couple legs, and emerge onto land, and creature stage challenges recall nothing so much as Diablo‘s loot-hunting thrills. Tribal scenarios were clearly inspired by real-time strategy outings such as WarCraft III. Later stages ultimately pay homage to Civilization and Master of Orion, with star travel even opening the possibility of visiting other enthusiasts’ worlds.

At first blush, it feels like a collection of random titles in disparate genres brought together under a single thematic umbrella. Dig deeper though, and subtle intricacies slowly begin to reveal themselves, with actions taken in one phase echoing down the corridors of natural selection to affect play generations hence. Not 12 hours after last leaving the game behind, the subtle lure of having “just one more go” keeps tugging at the edge of my consciousness. Maybe it’s having reached the tipping point at which I can finally crush the hated “pink” tribe that keeps stealing Chieftain Camae and baby Marruckee’s food. 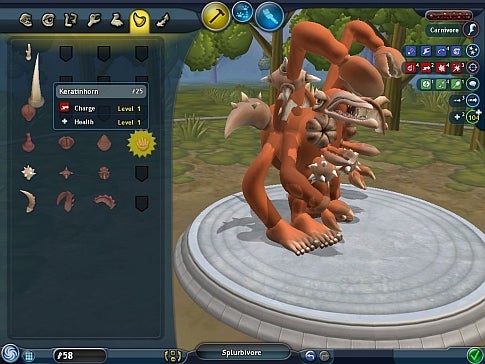 Spore: the Creature Creator utility allows you to quickly construct any monstrosity imaginable.

Still, regardless of actual graphics and gameplay, one can’t help but recognize that the real highlights here are hiding under the hood.

Consider the ability to drag-and-drop your way to countless new critters, attaching maws, paws, eyestalks, and pincers at will, with beasts able to evolve (parts are purchased using DNA currency) and animate realistically on the fly. It’s a feat accomplished by building metadata, or tiny descriptive tags, into every limb. Plop down a spine or leg, and AI routines designed to anticipate your desires ensure it’s organically fitted onto your creation, or easily transferred to one of dozens of viable positions nearby.

A similar array of procedural, or formula-based, innovations allows each creature’s DNA to be encoded into tiny (about 25 kilobit) PNG graphics files. Once uploaded into the online Sporepedia, they’re fair game for other players to download and modify, with “Sporecast” RSS feeds letting you routinely import your favorite players’ creations.

Released months prior to the full package’s September 7 debut, the “Creature Creator” allowed users to produce over 1,589,000 species in its first 18 days. (Wright jested that, compared to creationism’s seven-day teachings, the Spore community was operating at 38% of God’s capacity.) But with 10 million-plus pieces of content now available for download, and hundreds of thousands more being added every day, even Jehovah may soon be sweating his job security.

Having recently become proud parent to a feisty real-world newborn, I can attest to the singular joy of gazing deep into your offspring’s eyes and seeing the gleam of wit and intelligence staring back. With Spore transforming so many middle managers and suburban housewives into virtual parents, one shudders to think, just a few years hence, how many adorable little flipper- and mandible-sporting nippers will soon be clamoring for Mom’s or Dad’s attention, or worse, child support.

Get Rich Playing Games author and TV/radio host Scott Steinberg has covered technology for 300+ outlets from CNN to Rolling Stone. For more of his ramblings, visit www.scottsteinberg.com.