When light slows to the speed of a stroll, things get very, very strange. 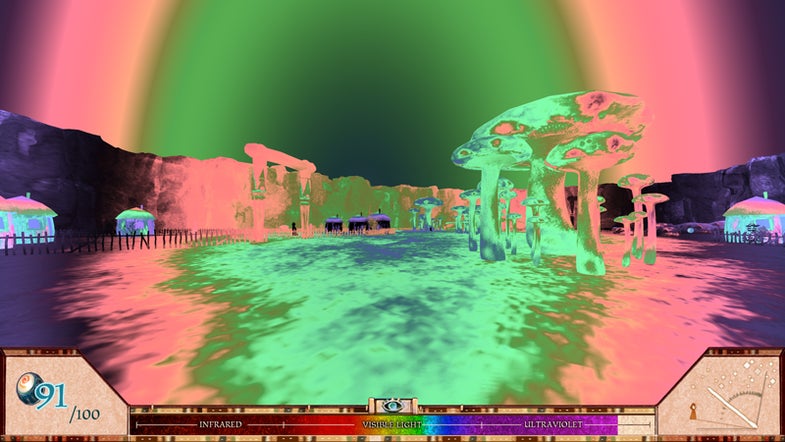 Many have wondered (and theorized) what it would be like to travel at the speed of light, but over at MIT’s Game Lab developers are envisioning what it would be like if light moved at the speed of you. Through a new game, aptly titled A Slower Speed of Light, game designers there have created a first-person prototype game in which the speed of light slowly decelerates as the user progresses through the game, bringing the effects of special relativity down to walking speed.

A Slower Speed of Light is built on top of Game Lab’s own custom-built, open-source relativistic game engine imbued with all of the strange effects of relativity. But rather than taking the user up to the speed of light, where these effects would be far easier observed, the game brings the speed of light down to the user.

The player begins by making his or her way through a pretty standard game world, with the task of collecting 100 little orbs scattered throughout the map. There are no enemies and no real obstacles–the twist is that with each orb collected, the speed of light within the game slows incrementally, and that is where the challenges begin for the player. Life at luminal speeds, as you might imagine, is very strange.

Players experience such relativistic strangeness as the Doppler effect (colors changing as visible light red- and blue-shifts and infrared and ultraviolet light enter the visible spectrum), time dilation (time experienced differently by the player and the space around him or her), the searchlight effect (more brightness in the direction of travel), the runtime effect (seeing objects as they looked in the past due to light’s travel time, the same thing that allows us to look back in time the deeper we look into the universe), and, perhaps most trippily, Lorentz transformation (basically the warping of space itself as the player approaches light speed).

That makes for one very strange gameplay experience, but you don’t have to take our word for it. Click through below to download A Slower Speed of Light.