Gearing Up the Game Boy

The GBA SP is the greatest mobile gaming device available. Here are the accessories that make it even better.

Gaming geeks may be salivating over the impending release of Nintendo’s DS (a dual-display portable device due out in November) and Sony’s PlayStation Portable (due sometime in the next decade), but don’t expect the reigning mobile champ, the Game Boy Advance SP, to go away anytime soon?Nintendo has sold nearly eight million since its release in 2003. And for good reason: The SP is the perfect mix of portability, durability and expandability. The unit has remained virtually unchanged (except for limited-edition designs, like this Classic NES version), but accessories for it abound. Most are inexpensive and many are crap, but here are the handful that I promise are worth your time and money.

(plus game cartridges, of course)

Dreamgear.net makes a $15 bundle that includes an FM radio adapter (I use it to tune in the gym’s TV monitors) and a headphone adapter that accepts any standard 3.5mm jack and keeps your charging port free. I use it all the time on airplanes, along with a USB charger ($3; joytech.net), which can juice the GBA from my laptop. I’ve learned that the $5 folding powered stereo speakers (x-tremegeek.com), on the other hand, are better saved for the hotel.

The link cable ($10; nintendo.com) lets you connect to another unit for multiplayer action. A spare 10-hour battery ($20) and the ergonomic Wing Grip ($5), both from Intec (inteclink.com), will get you through those marathon sessions on the last level of Metroid Fusion.

Finally, if your GBA is starting to show its age, cover it with a vinyl skin ($6, decalgirl.com) from one of DecalGirl’s dozens of designs. 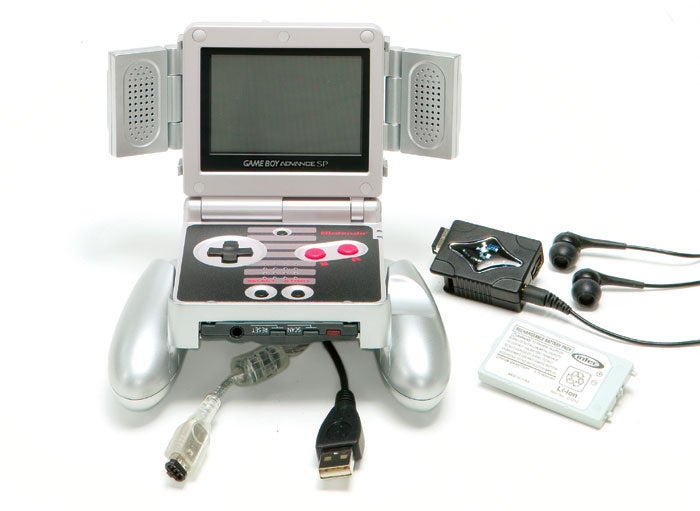 Gearing Up the Game Boy 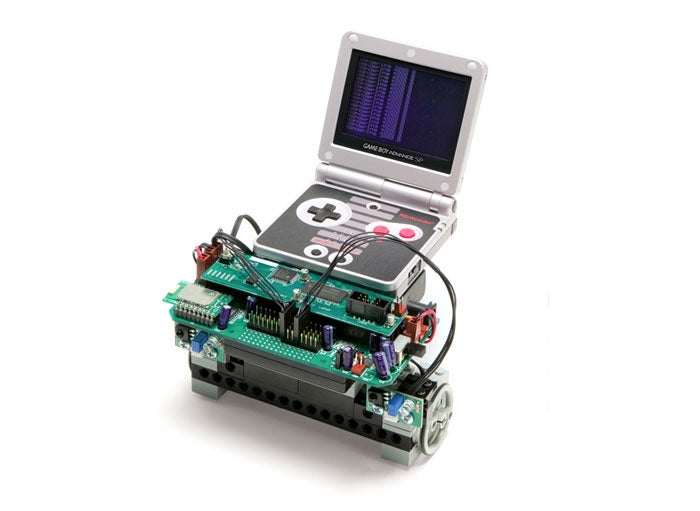 Game Boy plus Lego plus robot equals tech bliss. Charmed Labs’s Xport Robot Controller ($269) turns your GBA into the brain of a C or C++ programmable robot. Add a Lego Mindstorm kit ($200) to get motors, wheels and sensors. See charmedlabs.com for videos of the beast in action.
Gaming