You Say You Want a Revolution?

Everything old is new again as Civilization conquers the console 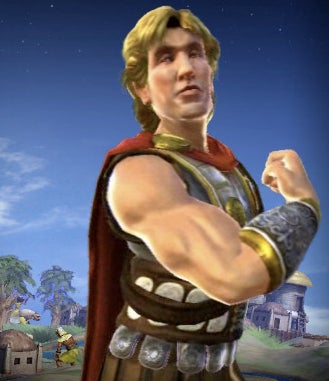 A console version of Civilization? For many PC gamers, that’s as heretical as a Citizen Kane TV series–you just don’t mess with the classics of popular culture. In this case, though, the man helming the project is the same guy who started it all, legendary designer Sid Meier. After struggling with the challenge for two years, Sid’s found a way to streamline his turn-based strategy game without lobotomizing it.

Civilization Revolution remains faithful to the game design launched seventeen years ago for MS-DOS computers with 16-color displays, but it feels remarkably fresh and accessible in its new keyboard- and mouseless incarnation.

The game challenges players to start out with a single primitive outpost 6000 years ago and, by developing commerce, culture, technology and military might over the course of centuries, achieve global domination. The game proceeds by turns – you move your units, assign tasks to your minions, then sit back nervously while your opponents (live or computer-controlled) set their own machinations in motion. Played on a PC, a single Civilization game runs at least 12 hours (and often much longer) and features lots of tiny on-screen details that would be lost on the standard-def TV screens that still hulk in many living rooms. How do you overcome those daunting hurdles on the way to console success?

First, create smaller maps. In PC Civ, cities are strewn across vast spaces of randomly generated geography. That gives you time to develop armies and resources before encountering the enemy, but also makes the initial hours kind of slow. The more compact geography of Civilization Revolution puts you within a few turns of an enemy right from the start, while at the same time allowing settlements and other map features to appear much larger on the screen. Instead of looking at icons representing cities or armies, you see buildings with distinctive architectures based on individual cultures, ornate Wonders of the World and detailed military units marching into combat.

Second, eliminate a lot of the micro-management. In Civ for the PC, you tell individual workers where to look for resources or build roads. Now you create a settlement, and the inhabitants get to work while you concentrate on strategic decisions.

Fourth, make the game situation more fluid. One of the great strengths of the Civilization concept is the variety of ways you can win. Military conquest is one path to victory, but you can also crush your opponents through cultural supremacy, technological superiority or economic domination. In the PC version, though, you basically have to choose one strategy and stick with it throughout the game — the slow, incremental growth required to achieve greatness on any given path makes starting over prohibitively time-consuming. The faster pace of advancement in Civilization Revolution gives you the freedom to change course and still climb to the top. The enhanced role of espionage also lends itself to quick changes in the state of the game. Sneak into a city and kidnap your opponent’s leaders, for example, and your odds of victory change dramatically.

I played computer Civilization from its first incarnation and, while the series continued to evolve and expand (Civilization IV is a still a very popular PC title, with expansion packs and fervent fans), I frankly lost the will to play its lengthy scenarios. Trying a nearly completed build of Civilization Revolution on the Xbox 360 rekindled my enthusiasm for the franchise. And while the 360 and PS3 versions have the visual splendor, I’m particularly excited about an unlikely third choice – the Nintendo DS. The interface is spartan and the graphics less impressive, but the complete game fits into that pocket-sized device – same rules, same strategy, same artificial intelligence, same addictive challenge. Creating a satisfying full-size console version of Civilization is indisputably impressive, but squeezing the historical arc of human achievement into an 8-ounce device may be an even bigger achievement.