Make Your Own Game 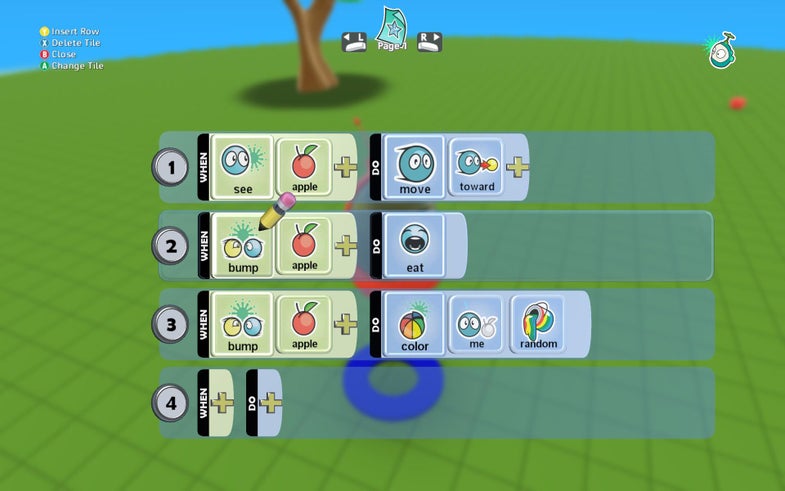 Developing PC and video games is a crapshoot at best. My own self-published Heavyweight Thunder took a year to build, cost a small fortune, and ultimately tanked with critics. But if Microsoft has its way, literally anyone, regardless of technical know-how, will soon have the opportunity to create jaw-dropping digital diversions.

Meet Kodu, a user-friendly approach to programming games that’s so simple even adults can comprehend it. Recently unveiled at the Consumer Electronics Show, the system’s icon-driven interface lets you quickly build entire 3D universes from scratch. Starting with an empty world, players can resculpt terrain or add objects, characters, and buildings of varying size, shape, and color just by pressing a button. Commands are represented by pictures of each item or individual, easing newcomers into the process. Once populated, everything inhabiting your universe can then be assigned simple behaviors.

Actions such as movement and combat are represented as virtual flash cards. By stringing them together into primitive sentences, such as “when see fruit, move towards and eat,” or “if enemy approaches, shoot it,” you define how in-game characters and objects behave in different situations. As such, it’s easy to construct simple mini-games or deeper arcade experiences in minutes.

Xbox Live users can download Kodu straight to home consoles later this spring, and even share creations online via a “Community Games” channel.

Unlike previous efforts such as XNA Game Studio ($99/year), no prior programming experience is required. Consider it a major step forward, as even free alternatives such as PlayFirst’s Playground SDK, aimed at the casual game market, require the ability to code in C++. Kodu is the first software utility to let fans of all ages, even grade-schoolers, jump right in and whip up completely new games from scratch.

Of course, drag-and-drop toolkits like The 3D Gamemaker ($35), which allow users to design quests with a click of the mouse, are nothing new on desktop computers. (On PCs, enthusiasts commonly tinker with existing games like Fallout 3 and Half-Life 2 by constructing “mods,” or homebrew modifications, using play-altering utilities.) But at least some degree of design foreknowledge is needed to make the most of these suites.

Granted, tools like the Torque Game Engine Advanced ($295) and Adventure Game Studio better cater to passionate hobbyists by offering a broader feature set. Online services such as Sploder are also available to a wider audience, boosting accessibility by compromising the complexity of what you can create. However, Kodu wisely splits the difference, offering beginner- and intermediate-level users a ready outlet for their creativity, regardless of computer expertise.

Next time I decide to publish a game, who knows? Maybe I’ll outsource to my wife and daughter.