The Grouse tries out a high-tech gaming headset 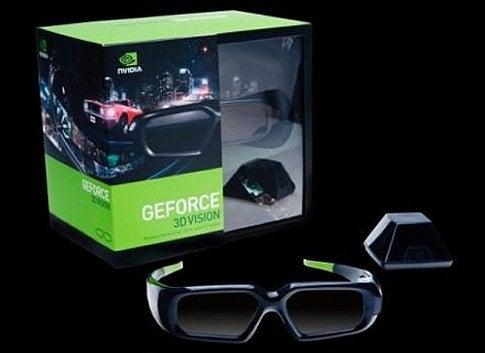 To me, nobody’s got Fisher Price and its 65-year-old View-Master beat when it comes to 3-D. Sure, its paper discs are only capable of conveying still images, but no matter how many so-called 3-D movies, games, ads, or even football matchups I’ve seen over the years, nothing’s come close to duplicating the awe I experienced the first time I ever peeped into those famous red binoculars. So, it was with great anticipation that I test drove the new GeForce 3-D Vision gaming goggles from Nvidia this week.

The $199 kit is comprised of a pair of Max Headroom-esque glasses and an IR emitter that jacks into a spare USB port. The “sold separately” requirements are any Nvidia GeForce Series 8 (or higher) graphics card and a 3-D Vision-ready display (either a 120Hz Dual-Link DVI monitor, one of a myriad of Mitsubishi DLP TV models or the DepthQ HD 3-D projector by LightSpeed Design).

Up until now, my first and last experience with three-dimensional gaming was Rad Racer, which careened onto the Nintendo Entertainment System way back in 1987. The game shipped with a pair of those classic creature feature-style cardboard specs and dropped into 3-D mode anytime you pressed the Select button. The resulting gameplay was more nauseating than it was three-dimensional and not something you really wanted to be subjected to for more than two consecutive minutes.

Well, things have changed a bit in the last two decades, and the Nvidia 3-D experience is pretty awesome. Setup is fairly straightforward: You have to dump your old Nvidia divers and install some new ones, but after that you’re ready to go. The way it works is that each of the lenses on the pair of glasses is actually an LCD that can go either completely dark or become completely transparent depending on the signal it receives from the IR emitter. The dark/light state of each lens flip-flops rapidly, showing the left eye one image and then the right eye a slightly different one, which fools the brain into thinking it’s seeing one single image with depth of field. This happens so rapidly (60 times per second, to be precise) that there’s no flicker detectable by the human eye.

The greatest virtue of 3-D Vision is that it’s already compatible and preconfigured to work with more than 300 existing games, including most of today’s biggest titles. Within minutes of receiving the kit, I was squaring up three-dimensional headshots in Call of Duty: World at War. And, boy, did those exploding skulls look amazing. 3-D Vision does an exceptional job of immersing you in a game — to the point that you can’t help but wonder how far off full-blown “virtual reality” gaming really is. I got completely lost in the experience of following my squadron out of a prison camp, then onto a beach and up into the jungle. Put simply, the entire experience was just way more convincing.

Nicely, the IR emitter has a dial on the back that allowed me to fiddle with the depth of field to my liking. I also appreciated the fact that the glasses can fit over the prescription reading specs I use at the computer. Another little bonus is that the glasses come with various nose-bridge pieces to accommodate different-sized beaks.

But what I liked most about 3-D Vision is that it doesn’t fall into the same gimmicky trap that every other 3-D experience inevitably does when it throws things right at your face or whizzes them directly under your nose. Yeah, this kind of stuff may solicit a “Whoa” out of me the first time I see it, but it always becomes so tired and predictable so fast (read my take on the recent 3-D football experiment for more on that). This isn’t the case with 3-D Vision because it’s using existing content that was never specifically built with 3-D glasses in mind. I can only hope that new games don’t start resorting to these lame tactics as 3-D gaming becomes more popular.

Of course, I’ve got my gripes — this is The Grouse, after all. My first has to do more with 3-D in general, though, and it’s the fact that I always find it hard and somewhat painful to focus on something directly when it’s in 3-D. Nvidia’s technology is no different. If I try to look right at something, whether it’s a squad member in Call of Duty, an evolutionary abomination in Spore or a brains-hungry zombie in Left 4 Dead, it actually hurts my eyes. But if I kind of step my eyes back, so to speak, and try to soak in the entire picture at once, it looks really impressive. Now, it’s one thing to train yourself to “unfocus” if you’re watching a movie, but that’s not so easy to do in a video game where a lack of focus will get you killed.

My other complaint is a familiar one to this column, and that’s price. 120Hz Dual-Link DVI monitors aren’t exactly commonplace quite yet, so to experience 3-D Vision you’re more than likely going to have to shell out for a fancy new display. Nvidia bundles a 22-inch Samsung with the glasses kit for a combined $598. Of course, if you don’t happen to have a GeForce Series 8 or higher GPU, that’s another couple of hundred bucks you’ll be parting with. Suspending technological reality for a moment (and business reality, too), it would be nice if the 3-D glasses just worked with my existing monitor and GPU, and without the need to give up a USB port.

That’s why, ultimately, 3-D Vision isn’t for everyone. If you’re a hardcore PC gamer who’s hands are superglued to the keyboard and mouse, then 3-D Vision is an investment that will improve your day-to-day life by a factor of 1,000. The more casual gamer will want to wait it out, let prices come down, and see if the technology even takes off and gains widespread acceptance. For others, being able to watch Lara Croft prance around in three dimensions in Tomb Raider: Underworld is worth the price of admission.