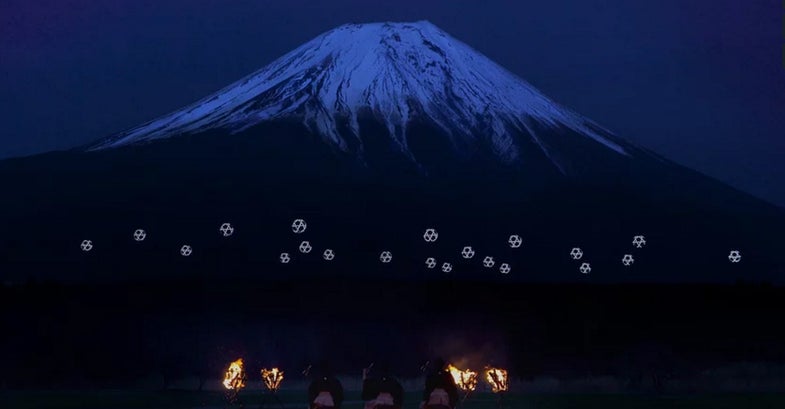 Drones are usually behind the camera. The unmanned flying machines are perhaps best known as filmographers and spy planes, mechanical beasts training unblinking eyes on the ground below. But there is more to the craft than their ability to spy: when outfitted with LED lights and set to a live band, drone swarms themselves become the spectacle–a new high art. Sky high art.

This production comes from Sky Magic Drones, who put over 16,500 LED lights on over 20 drones, and then launched them into an orchestrated performance before Mt. Fuji.

The entire show is accompanied by a band playing Shamisens, traditional Japanese guitars, and despite the obvious modernity of the drones above, it feels timeless, as though a drone ballet could.

These aren’t the first drone dances we’ve seen, and it’s more than likely the art will end as mere novelty, a half-remembered spectacle from the dawn of the drone age.

Yet there is so much mastery here, I think it has some staying power. Perhaps in some future, drone shows fill a similar niche to fireworks displays: charming, stunning lights in the sky, for no purpose besides sheer amusement. Watch and listen to the full show below below: