What Happens When A Drone Hits A Pork Roast? 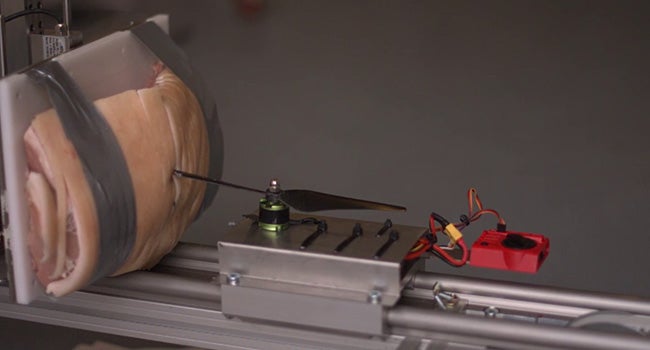 For all the speculation about danger from consumer drones, there’s surprisingly little research on what, exactly, happens when a spinning rotor hits flesh. Mythbusters demonstrated that a drone can cut chicken. Now, a team at Aalborg University’s Drone Research Lab in Denmark have filmed what happens when a rotor, spinning at full speed, hits a pork roast:

For contrast, here is that same encounter, filmed at normal speed:

This is just the early stage of testing. The laboratory catapult can hurtle a 2-pound drone at a piece of meat or other target at 33 mph, which is about the size of a typical small drone, and about the top speed they fly. Still, the team urges caution before reading too much into this. From the Drone Research Lab:

After all, anyone can demonstrate that drones cut meat. It takes true scientists to show that it happens repeatedly, and then to translate those experiment results carefully into implications for life outside the lab. Watch a longer cut of it in slow motion below: