To study the fabric of reality 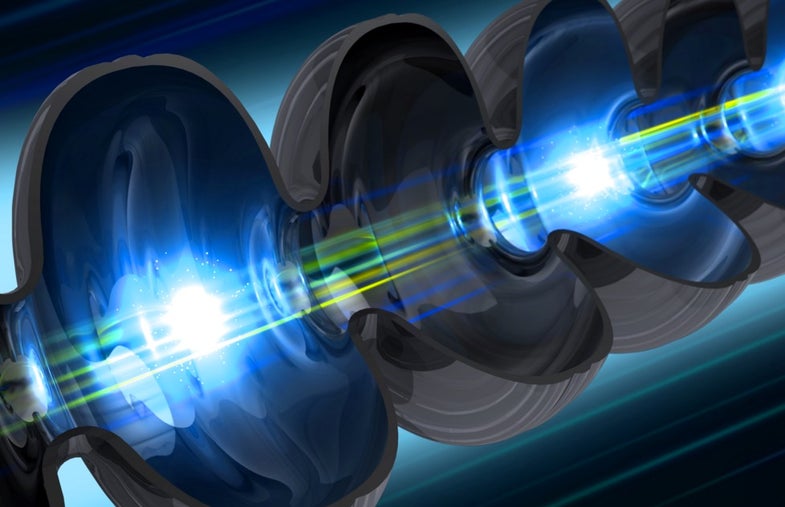 There are lots of things that we don’t fully understand, because we just can’t see them. Individual atoms and molecules have been captured in still images, but capturing videos to see their movement requires more power at a faster rate. To do this, researchers at Stanford’s SLAC National Accelerator Laboratory (SLAC used to stand for Stanford Linear Accelerator Center), use an x-ray laser that fires at incredibly fast speeds (quadrillionths of a second) to make stop-motion videos of chemical reactions. The laser is nearly two miles long. And now, it’s getting an upgrade.

SLAC announced yesterday that their x-ray laser, the Linac Coherent Light Source, would be getting an upgrade to the tune of $1 billion dollars. The plan is to rip out one-third of the existing laser and rebuild the portion with specialty components, able to function 8,000 times faster and 10,000 times brighter. The new portion will be called the LCLS-II.

“It would be completely impractical to look at those systems today,” says Dunne. “If you think about the difference between a photograph and a movie, it gives you an impression of the step change in introducing LCLS to the world.”

The LCLS works by directing terawatts of light in the x-ray spectrum into one place in incredibly fast bursts. The bursts themselves only last femtoseconds, or quadrillionths of a second. With their current operation, the machine can shoot 120 bursts per second. After the upgrade, the LCLS will be able to shoot one million bursts per second, using the same amount of energy. While the bursts are happening more frequently, they’re also happening much quicker, reducing the amount of energy spent per burst. That’s why one second of bursts on the new kilometer of LCLS will consume the same amount of energy as the older two kilometers, which will both stay functioning. The average energy spent is the same. All in all, the total energy spent in one burst is rivaled by the energy in a hot cup of coffee.

Dunne says that the new portion will be used for things that don’t require as much light, but are very dependent on time. If scientists want to observe the exact femtoseconds when oxygen and hydrogen bond, they’ll have much more precise data with the LCLS-II. But for more dense samples like organic tissue, the SLAC team will default back to the more powerful LCLS-I, which is brighter but slower.

The actual upgrades are focused around a “superconducting accelerator.” Now, most of the conducting material for the laser is made of copper, like the wiring in most homes. The superconducting accelerator will take advantage of a compound made mostly of niobium, a metal used in jet engines and rockets. When the niobium compound is chilled down to negative 456 degrees Fahrenheit, it conducts electricity with almost zero resistance, allowing the charge to move faster and more efficiently throughout the length of the conductor.

Despite these changes, the new system will work almost identically to the old one. Electrons are hurled almost at the speed of light down a path between huge magnets. The magnets pull the electrons off their intended paths, thus emitting x-rays.

As one might expect, both methods draw a lot of energy. Dunne says that the cost of energy for the projects ranges in the millions per year.

The upgrade effort is being funded by the U.S. Department of Energy, and is expected to be operational in the early 2020s. The existing parts of the x-ray laser will still function, except for a 6-month period in 2017 and 12-month period from 2018-2019.