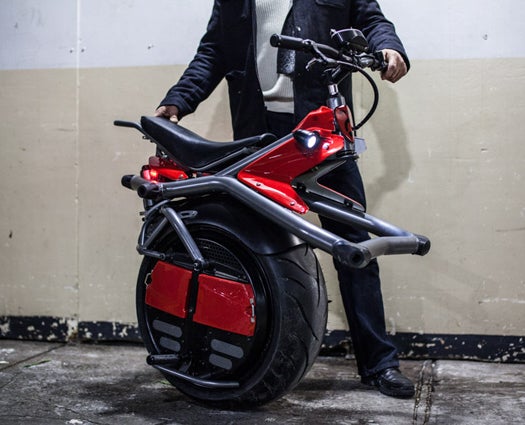 The future has arrived – and it’s on one wheel. Check out the video above of the Ryno bike: a one-wheeled, electric-powered motorcycle created by Chris Hoffmann. The Ryno was based off a sketch by Hoffmann’s daughter who saw something like the vehicle in a video game. With 15 years of auto industry engineering experience, Hoffmann got busy building the very first Ryno.

Six years and three prototypes later, the Ryno travels at speeds up to 10 MPH and can travel up to 10 miles on a fully charged battery. The bike weights 160 pounds and can carry up to 260 pounds with its custom steel frame. LED headlights ensure riders can see where they’re going and others in cars or on bikes can see the rider.

Last week, Hoffmann came into the Popular Science office and brought with him the Ryno. A couple of us rode it around the halls of our floor, people pulling off their headphones and peeking behind corners to see what was going on. It felt a little weird getting on the Ryno at first – there’s no gas pedal or normal brake. You propel it by leaning forward and go reverse by leaning back. To steer, it’s more about rotating the hips than twisting the handlebars. Hoffmann guided me on my first couple of rides down the hallways, kind of like learning how to ride a bike. But once I got the hang of it, I pretty much felt like I was riding a motorcycle owned by the Red Power Ranger.

Hoffmann’s first-year plan is to have a limited amount of bikes sold by five dealers, and begin shipping on April 16. The Ryno bike will be priced at about $5,300. Check out more details about the motorcycle on its website.