You Built What?! The 200-MPG Aerocycle 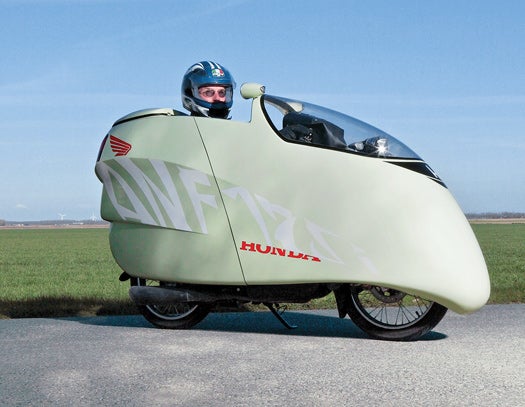 Dutch vehicle designer Allert Jacobs knew that his fuel-sipping, shell-encased motorcycle was street-legal. Unfortunately, the police didn’t, and impounded it after pulling him over during a test run. 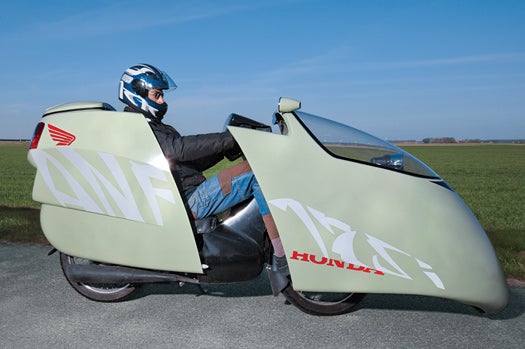 But Jacobs has a lot of patience. He first built a resistance-reducing nose cone in 2007, in an attempt to increase his Honda Innova 125i’s 114-mpg rating. That design fell short, so he built a 1:5 scale model, followed by a full-size polyurethane and wood mold. By 2009, he was crafting the fiberglass shell. Steel tubes welded to the bike’s frame attach it, and a frame and rails added to the front of the bike allow the front of the shell to slide forward like a door and lock shut. Last winter, he even made aerodynamic cones with indicator lights for his side-view mirrors. 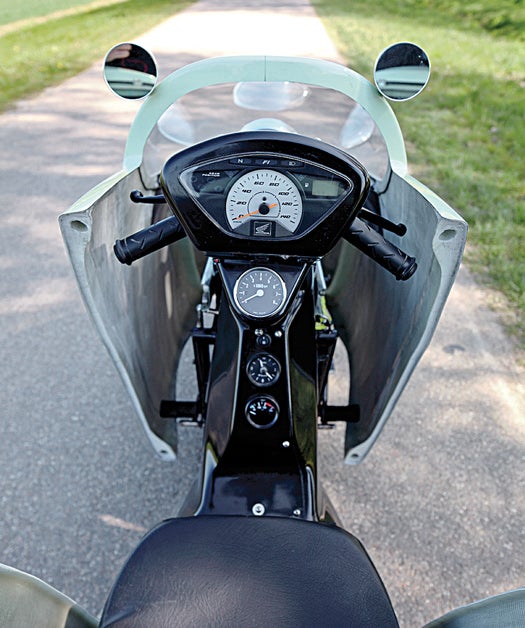 The top view of the motorcycle

Most of the mileage boost comes from the aerodynamic shape, but Jacobs also converted the bike’s automatic clutch to manual to keep it from slipping. Altogether, the changes worked: On one long trip, the bike got 214 miles per gallon. And as for the impound? “I got it back,” he says, “and they had to apologize.”

Jacobs can put his feet down to steady himself when stopped, but the shell prevents him from planting them out wide. He’s considering building a new version with open sides in order to reduce balance issues.

After lowering the seat and raising the footrests above the wheel, Jacobs decided that they would improve steering if they were closer to the hub, so he welded tubes to the frame parallel to the front forks and attached the footrests to them.

Jacobs welded and bolted a steel rail to the front of the bike so that half the shell can slide forward 18 inches, allowing him easy access and exit. There’s a security bonus too, since he can lock up his bike along with any valuables inside. 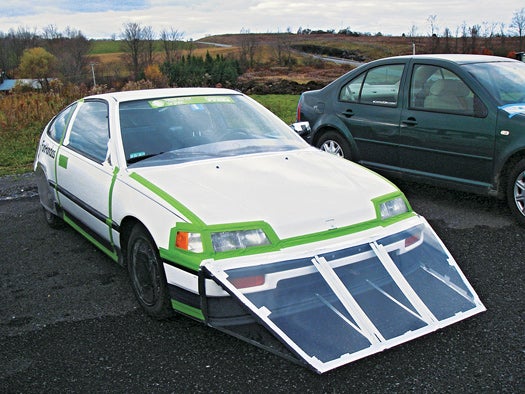 Thanks to ecomodder.com, a community of DIYers hell-bent on adding mileage, for help with this article.

Chang Ho Kim, who runs an auto-repair shop in Massachusetts, skipped doing airflow calculations and modified his 1989 Honda CRX HF largely on instinct. He added a narrow, wedge-shaped acrylic nose to move the air over the hood and roof, taped the seams between the body panels to prevent turbulence, and installed acrylic skirts to keep air flowing past the rear tires. An aerodynamic tail extends down off the hatchback glass. A few screws and lots of aluminum duct tape keep the pieces together. The mods yielded results: Previously, his Honda ran at 40 miles per gallon; now it routinely tops 60. 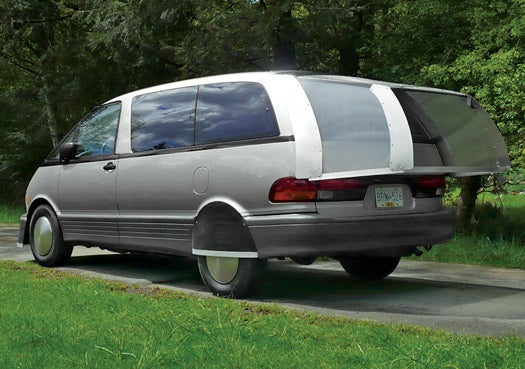 Glass artist and furniture maker Marcus Sabathil’s Toyota Previa minivan is a moving example of his dedication to green principles: He increased its highway mileage from 20 mpg to 36. Sabathil made more than a dozen mechanical modifications, crafted a clear Lexan plastic aerodynamic tail with stainless-steel trim, and added interior side-view mirrors so he could fold in the outer ones on the road. 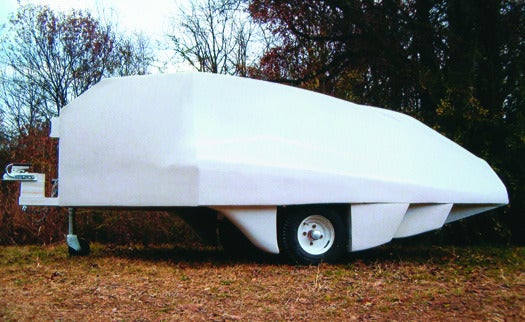 Phil Knox, an aeromodding legend, attached an inverted and partially sawed-off boat to the top of a utility trailer and added fairings in front of and behind the wheels, as well as a smooth aluminum belly pan to reduce drag beneath the trailer. As a result, unlike normal trailers, Knox’s 430-pound creation—still awaiting a few tweaks before it’s finished—does not appear to reduce his pickup truck’s mileage.

The H2Whoa Credo: DIY can be dangerous. We review all our projects before publishing them, but ultimately your safety is your responsibility. Always wear protective gear, take proper safety precautions, and follow all laws and regulations