The Yamaha Moegi Demonstrates The Future of Fuel Efficiency

Since the days of $4 gas began, the single-cylinder motorcycles and scooters that dominate international megacities have become increasingly common... 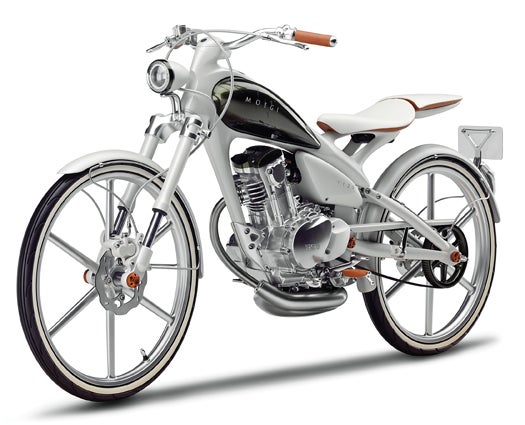 Since the days of $4 gas began, the single-cylinder motorcycles and scooters that dominate international megacities have become increasingly common on American streets. Engineers at Yamaha created the Y125 Moegi concept to capitalize on that trend. They based it on the company’s first motorcycle, the 1955 125-cc YA-1, but they also included some modern touches, in particular an ultralight frame and a new cylinder design that could help make the Moegi one of the lightest and most fuel-efficient motorcycles ever.

Like the original YA-1, the Moegi runs on an air-cooled, 125-cc engine, which connects to the bike’s 20-inch rear wheel with a simple belt drive. But engineers replaced the YA-1’s lawnmower-like two-stroke with a low-friction four-stroke. They also incorporated another Yamaha invention: the DiASil cylinder, the world’s first mass-produced all-aluminum, die-cast motorcycle cylinder. The DiASil’s abrasion-resistant aluminum alloy dissipates heat at three times the rate of steel. When the engine isn’t being adequately cooled by the wind (for example, when riding uphill or stuck in traffic), there’s less power loss resulting from increased engine heat.

Yamaha hasn’t announced a horse-power rating for the Moegi engine, but 10 to 15 horsepower would be enough to propel a bike this light to 50 mph. Yamaha engineers have said, however, that the Moegi could achieve 188 mpg, which would make it nearly four times as efficient as a typical motorcycle.