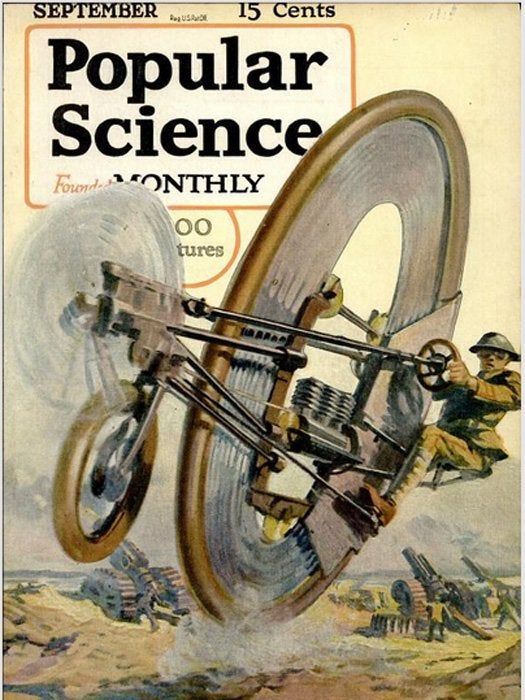 I have never understood why people who aren’t circus clowns ride unicycles. They seem designed specifically to create wipeouts and, subsequently, schadenfreude (a lesson our writer learned all too well in 1967 when he undertook the massive challenge of learning to ride one). But who knew that tucked away in the pages of PopScis past were some of the weirdest, most delightfully retro-futuristic unicycles of all time? Now we all do. And I don’t think it’s a stretch to say our lives are all the better for it.

There’s the gyroscopic unicycle whose creator claimed it could reach speeds of up to 400 miles per hour, the motorized unicycle invented by an Italian policeman who rode it all the way from Milan to Rome, the unicycle war tank, complete with built-in machine gun and a one-in-a-million photo of the creator of a DIY moto-unicycle astride his creation wearing a leather jacket like the leader of the most badass (and probably only) unicycle gang in the world.

You’ll find all this and more in this week’s archive gallery. Join us as we delve into the depths of the unicycle’s history and all of its bizarre evolutionary branches that never quite took. 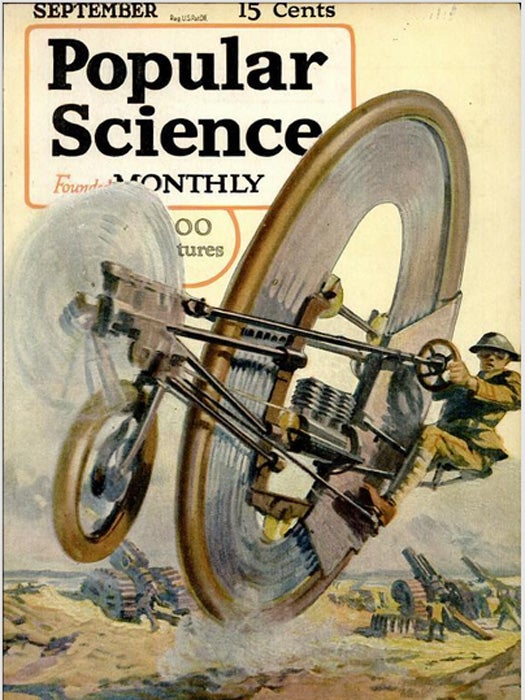 Even though it clearly has two wheels, this machine still counts as a unicycle. The air-screw propeller means that at high speeds, the front control wheel is lifted up, so you coast along on just the one big wheel. We weren’t terribly impressed by the vehicle, since this design, by A.F. d’Harlingue, removed the only advantage the unicycle holds over the bicycle: the ability to turn just by leaning one way or the other. However, we thought that by augmenting the air-screw propeller with an honest-to-god engine, we could turn this bad boy into a “jolly sport machine.” Read the full story in Here’s the Air-Propelled Unicycle 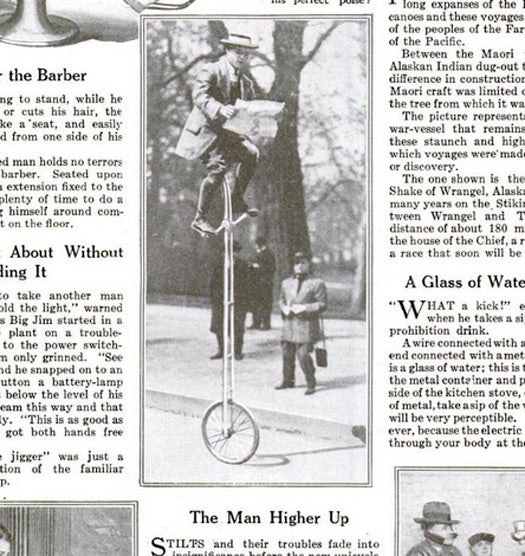 Despite the inherent danger in his precarious position (which is clearly recognized by the man behind him) the rider of this extra-tall unicycle seems content to read his morning paper rather than look where he’s going. We found ourselves riddled with questions such as: what happens if a car drives by? And how’d he get up there in the first place? The answers have been lost to the sands of time, but luckily, this picture has not. Read the full story in The Man Higher Up 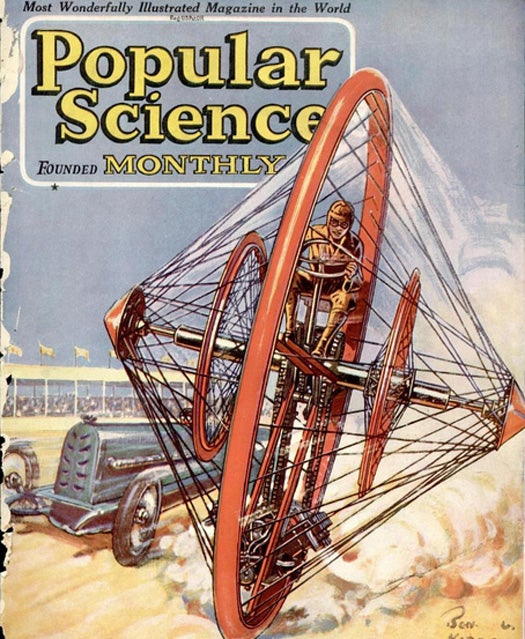 Shaped like a top turned on its side, or a pointy vertical Saturn, this gyroscopic unicycle was supposed to be able to travel at speeds of up to 400 miles per hour, according to Professor E.J. Christie, its inventor, though at the time of this article, it had yet to be tested. The monstrosity was 14 feet across, weighed 2400 pounds and used a 250-horsepower airplane engine for power. The gyroscopes on either side of the center wheel could be shifted to the left or right along their axles using the steering wheel, allowing the rider to turn. Read the full story in Will Gyroscopic Wheel Shatter Speed Records? 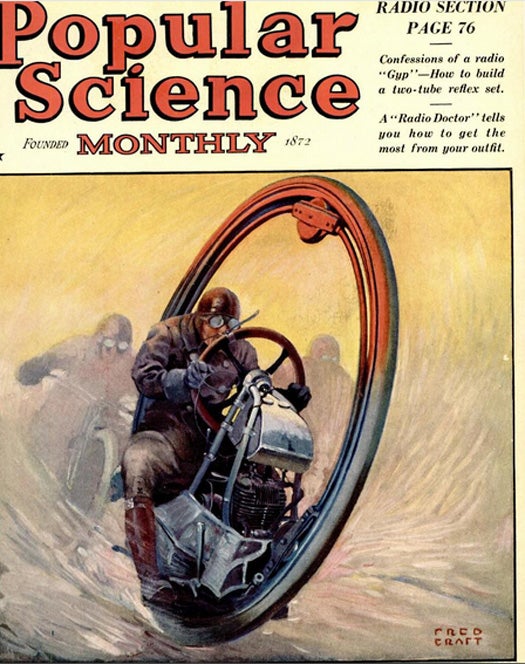 Davide Gislaghi, a motorcycle police officer based in Milan, Italy, created this unicycle, or, as he calls it, “velocita” (the Italian word for speed) after reasoning that one wheel would be more efficient than the two on his chopper. It’s made of a pneumatic tire and a steel ring with an air-cooled motor to propel it forward and keep it from overheating. The rider balances the vehicle much as one would a motorcycle, so it must not have been too hard for Gislaghi to get accustomed to driving it. Even so, his invention was largely scoffed at – until he drove it from Milan to Rome and showed it off at the National Stadium. Read the full story in Speedy New Motor-Hoop Amazes Italians 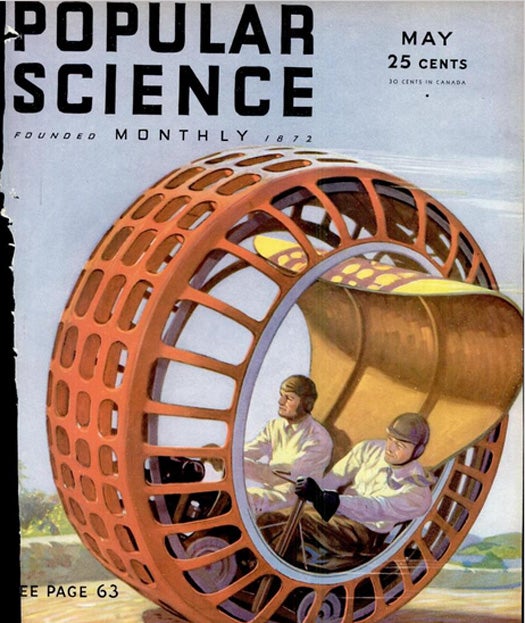 Giant Iron Wheel Could Be Car of the Future: May 1932

Ah, the 1930s. A time when something that could go 30 miles per hour was considered a “high-speed vehicle.” The inventor of this motorized iron latticework hoop, Dr. J. H. Purves, believed that by stripping away three of the wheels found on conventional cars, he had stripped locomotion down to its most basic form, what he called the dynasphere. One can only imagine he dreamed of motorizing the caveman’s wheel, and this is what he came up with. A roller-mounted carriage in the interior of the wheel holds the driver’s seat as well as the engine, which transmits power to the inner rim of the hoop. The driver can steer the dynasphere by shifting the cabin to one side or the other, shifting its weight and changing its direction. Read the full story in Amazing Motor-Driven Hoop May Be Car of the Future 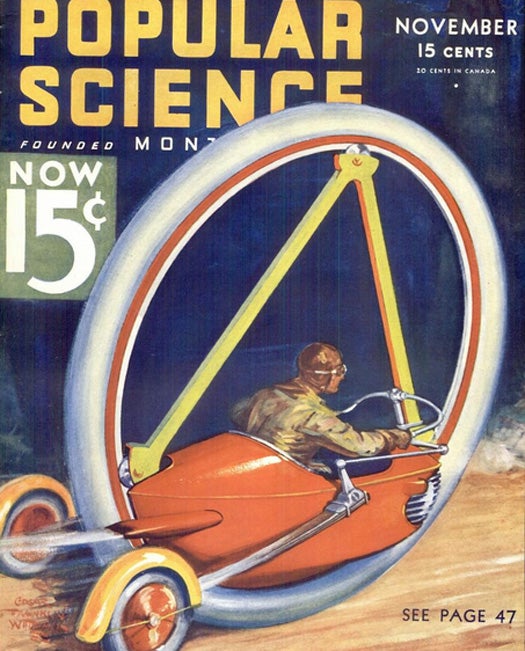 The Unicycle of War: November 1933

If this unicycle war machine reminds you a little of Davide Gislaghi’s “velocita,” it is with good reason. The article compares this New-York born “war tank on one wheel” to the Italian-invented unicycle, now about 10 years old. However, in this wheel, the driver is enclosed and given a machine gun. The vehicle has little crutches that help it climb over obstacles and its stabilizer wheel doubles as a balancing float so the unicycle can navigate through water as well. Read the full story in War Tank on One Wheel 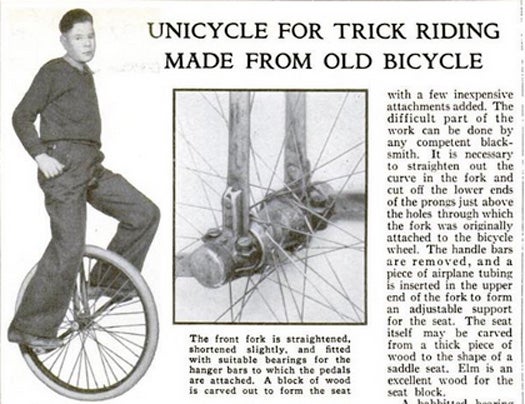 Turn Your Bike Into a Unicycle: September 1934

That second wheel on your bike weighing you down? Want to distinguish yourself from your peers with a more dangerous ride? Well “any competent blacksmith” can help you shave the pounds off of your bicycle and leave you with a brand spanking new unicycle. The front fork and rear wheel of the bike are used to form the new unicycle. The fork is straightened, shortened and then fit to the hanger bars where the pedals are attached. Then, all you need is a seat. Read the full story in Unicycle for Trick Riding Made From Old Bicycle 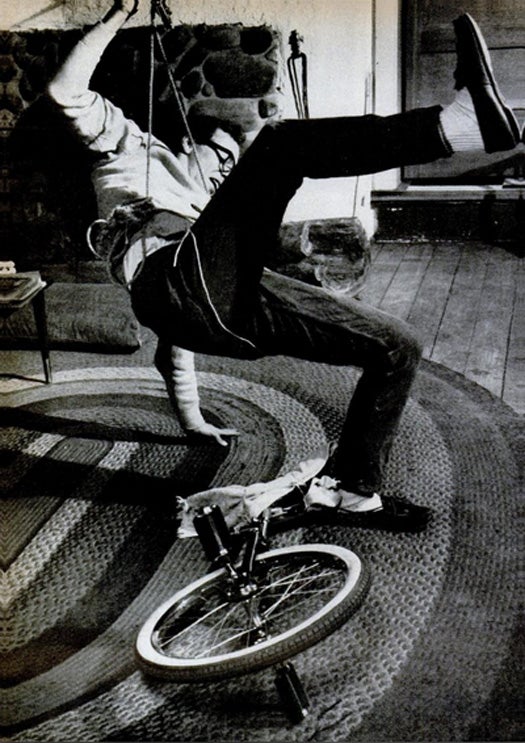 If “the future now” wasn’t our motto, maybe “anything for science” should have been. Our intrepid reporter stuck his neck out to learn to ride a unicycle, trying out what was apparently a flash in the pan fad in the late 60s. He tried all manner of possible balancing aids: ski poles, holding onto the wall and even hanging a pulley system from his ceiling. Unicycle manufacturers claimed they were unable to give him tips on how to ride it, so he sought out a tutor. After much mishap our hero prevailed, though he said his dog was afraid of him when he rode. Read the full story in Only One Wheel to a Customer! 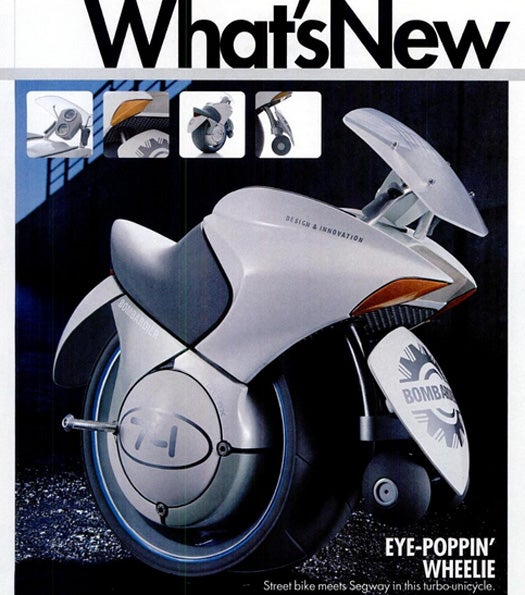 Bombardier, a company that makes jet skis and all-terrain vehicles, was asked to create a concept that represented that future of commuting and this is what they came up with. The Embrio Advanced Concept was gyro-stabilized, like the magnificent gyro-unicycle of yore, only sleeker and powered by a hydrogen fuel cell. It also had a second wheel – “landing gear” to help you come to an easy stop. Read the full story in Eye-Poppin’ Wheelie 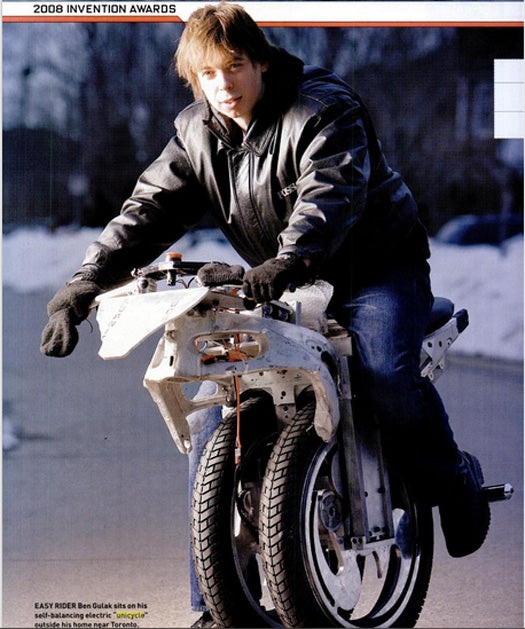 While this unicycle is technically made of two side by side wheels, the general concept of leaning to turn remains the same. Then-19-year-old Ben Gulak was inspired to create the cycle when he became engulfed in smog after touching down in Beijing and saw that motorbikes were partly to blame. The Uno, as he calls it, was made with two wheelchair motors, a gyroscope, a balancing control system and the body of a Yamaha R1 motorcycle, in addition to the two wheels. The Uno is all electric, so it doesn’t produce any smog. And if that weren’t justification enough, just look at that picture and tell us you don’t want to join a unicycle gang. Read the full story in A Moto-Unicycle
Motorcycles
Vehicles
archive gallery
archives
bicycles
Cars
gyroscopes