How to build a commercially viable flying car: first, make it a motorcycle. The idea of creating a personal transportation... 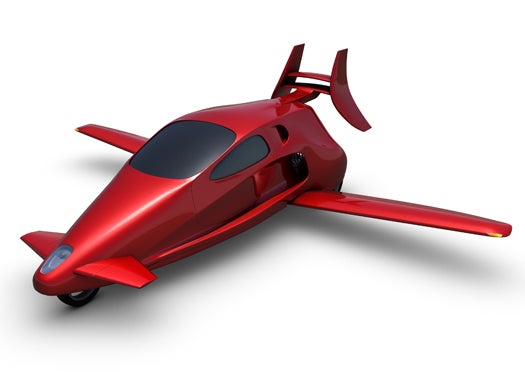 How to build a commercially viable flying car: first, make it a motorcycle. The idea of creating a personal transportation craft that can both take to the skies and travel along the ground has been alive as long as science fiction. But meeting both the FAA’s regulations for aircraft while simultaneously meeting the National Highway Transportation Safety Administration’s guidelines for automobiles means compromises on both sides. Enter the Switchblade, a flying motorcycle that Northern California engineering firm Samson Motorworks hopes to have on the road and in the sky by next year.

The company chose a three-wheel design for the Switchblade to meet the criteria for a motorcycle rather than a car, thus side-stepping some automobile regulations, like the inclusion of bumpers, that add weight and reduce aerodynamics. The Switchblade still retains some car-like features — occupants sit side-by-side in an enclosed climate-controlled cab, for instance — but the long nose and canard is more rocket or drag bike than modern sedan.

Where it couldn’t dodge regulatory hurdles, Samson engineers have met them head-on, installing rearview mirrors that retract during flight to reduce drag and devising wings that scissor open during flight mode but stow away in contained, protective underbelly compartments during ground transit.

Other companies are racing their own ground-to-air personal transportation craft to market as well, most notably Terrafugia’s Transition flying car (or “roadable aircraft”), a four-wheeled, folding-wing vehicle designed to fit in a standard garage. But while the Transition is designed to hit all those NHTSA safety requirements that make it as safe on the road as your family sedan — bumpers, extensive crash testing, a stable four-point wheel base, etc. — its high six-figure price tag makes purchasing one wishful thinking for many.

Samson aims to have a $60,000, DIY kit to market as early as 2011, though a 120-150 horsepower engine and avionics will retail separately for about $25,000, all said. The skeptics in us think there’s a very slim chance they’ll hit that deadline; after all, we’ve seen a lot of pie-in-the-sky personal flying craft ideas come across our desks, but we have yet to see any cruise past our office windows. Still, that doesn’t mean we’re not anxiously awaiting the day that we do.