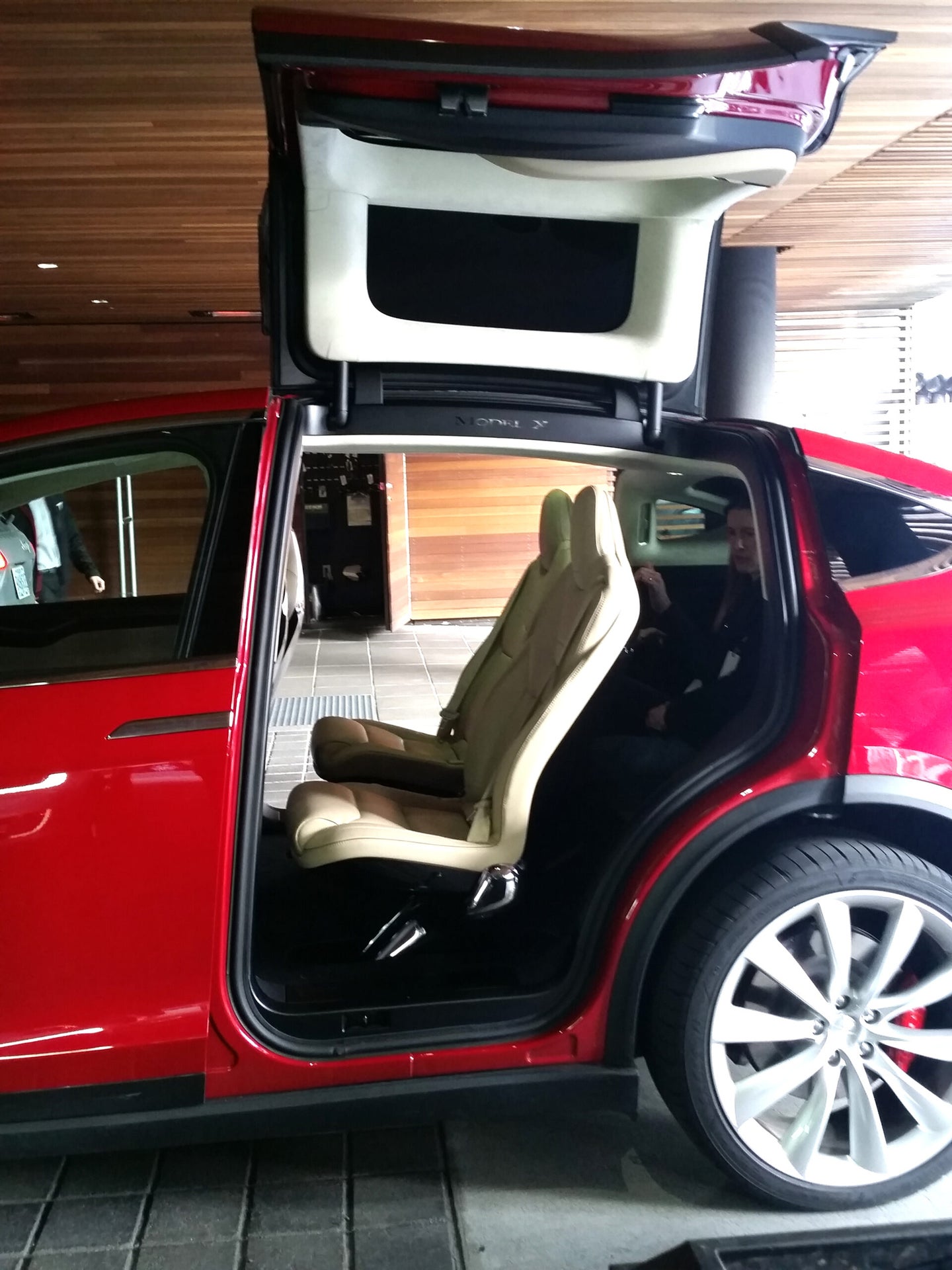 The Tesla Model X is taking a 30-city tour of the United States to meet its fans. Not just any fans, though – these are the buyers who put down deposits ages ago in anticipation of driving home the company’s first SUV.

Asoka, a lanky middle-aged guy in jeans and wire-framed glasses, attended the meet-and-greet in Portland, Oregon. He was one of the first to make a reservation for the Model X; he’s got a Tesla Roadster (license plate NV MYEV) but not a Model S sedan. He does have a Honda CR-V for the mix of utility and decent gas mileage. That’s why he was so eager to get in line for the Model X. “It’s a bigger, better Honda CR-V,” he said.

The Model X is based on the same platform as the Model S – same batteries, same drive train. The body shape is the biggest difference, but it is a huge difference in several ways.

The Model X can seat up to seven in three rows, and the company says the show-offy Falcon Wing doors will allow for graceful entrances and exits, but that seemed unlikely. Until I saw it with my own eyes. People were as eager to climb into the back seats to test the fit as they were to sit in the driver’s seat. I got in and out with a giant messenger bag full of gear in tow, and the aisle between the middle seats as well as, yes, the winged doors made it less awkward than third-row seats usually are.

The body shape is the biggest difference, but it is a huge difference.

Another surprise for an electric SUV: the Model X is rated to tow up to 5,000 pounds with 713 lb-ft of total torque from both of its motors. Asoka was already planning on buying a utility trailer for trips to the farmers’ market in their Model X after making his wife hold a large plant in her lap in the Roadster on the way home last summer.

The Model X will better both the range of Asoka’s Roadster and the efficiency of his CR-V. He says he currently sees a maximum of about 170 miles in the Roadster, while the Model X P90D performance model used for the test drives has a 250-mile range. And the Honda’s 30 mpg or so will be tripled to about 90 MPGe in the Model X P90D.

The Model X has other new elements that differentiate it from the Model S, like the windshield that extends up over the heads of the front seat occupants and the doors that open automatically as you approach (as long as you have the key fob somewhere on your person).

Asoka said he bought the Tesla Roadster three years ago because he wanted an electric car. Since then, it’s become the daily driver in his household, accounting for far more than half of the annual miles he and his wife drive. As he mashed the accelerator on an empty stretch of road, he noted that the SUV compares well with the two-seater sports car. “That acceleration never gets old,” he said with a grin.