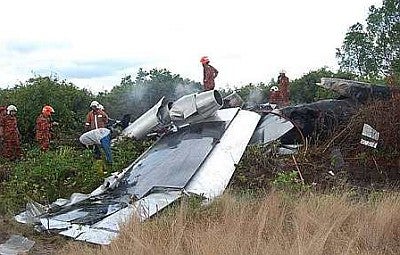 Michael Robert Dacre, a 53-year-old aircraft entrepreneur, died when his Jetpod–a prototype “air taxi” twin-jet aircraft –crashed on take-off during a test flight in Malaysia. Dacre had hoped to revolutionize city commuting with the jetpod, an aircraft he invented with the ability to take off or land on very short stretches of road or grass for short-hop commuting.

The very quiet short take-off and landing (VQSTOL) aircraft used both horizontal and vertical thrust to get airborne in just 125 meters (410 ft), with the ability to reconfigure quickly into a jet capable of cruising at 310 mph. The Times reports that Dacre had been developing the concept with his UK-based company Avcen as a possible commuting alternative that might have charged £40 (65 USD) for a quick flight from Heathrow Airport to Central London. Can a British inventor’s dream outlive him?

Malaysian officials say that the Jetpod reached a height of about 200 meters (656 ft) before plummeting to the ground, where it was engulfed in flames, according to The Guardian.

Inventors and companies reaching for the dream of VQSTOL or vertical-takeoff-and-landing (VTOL) aircraft have met with their share of past troubles. The U.S. Marines’ and Air Force’s tilt-rotor V-22 Osprey managed to overcome a checkered developmental history and three fatal test-flight crashes to become the transport workhorse for U.S. Marines.

We’ve previously covered other tilt-rotor aircraft that typically used propellers rather than jet engines to achieve helicopter-like mobility. Such ventures have ranged from personal aircraft to the AeroTrain commercial plane concept.

Speculation on the cause behind the Jetpod’s tragic crash remains difficult while the Malaysian Department of Civil Aviation investigates the possible causes.