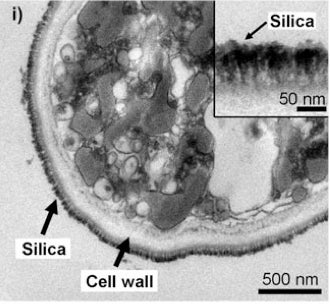 In an interesting experiment, researchers sheathed living yeast cells in armor of silica. The cells survived, and emerged as unusual armored versions of themselves that could become building blocks for nanotech applications.

Korean researchers carried out their experiment by coating the yeast cells with charged polymers, and then leaving the cells in a silicic acid solution bath. Derek Lowe of Corante’s “In the Pipeline” blog remarks that the cells ended up resembling a “bizarre sort of diatom,” or a type of algae that naturally comes with silicate armor.

The yeast cells somehow emerged stronger and more capable of surviving thirty days in the cold with no nutrients, compared to an unaltered cell. But the armored cells failed to replicate under “warm nutrient broth” conditions that yeast typically flourishes under — an indication that normal cell mitosis has somehow failed.

At least the yeast did better than E. coli bacteria, which simply died upon getting the initial polymer coating. Previous research has also tested using silica to immobilize yeast cells, although this study may go a step beyond by examining survivability.

Lowe suggests researchers might use this technique to further combine cell biology and nanotech devices, and create tiny cyborgs. Silica layers could perhaps help conduct electricity and serve as a platform for scientists to exert greater control over the cells. But we just want to see yeast cells trundling along with nanogear appendages.