The vehicles will take part in a pilot program with Kroger in the fall. 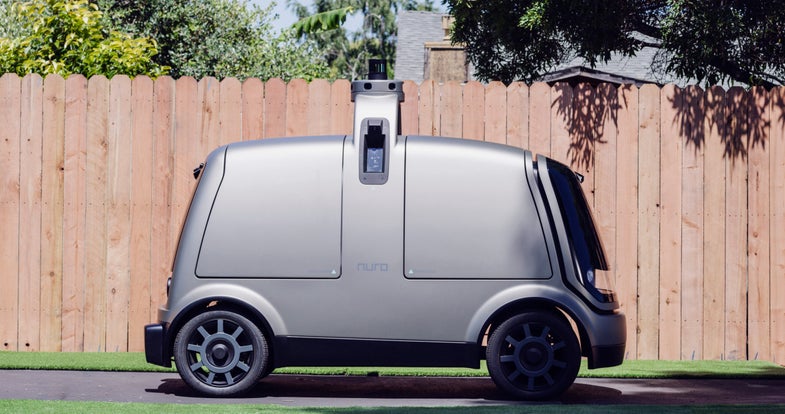 Most self-driving cars are designed to carry people. That’s what Google’s autonomous vehicles do in Arizona, for example. But a company called Nuro has created a diminutive ‘bot that can drive itself down streets toting eggs, toilet paper, hotdogs, and other kinds of groceries to people’s homes. And interestingly, when humans aren’t your cargo, different ways of handling safety present themselves.

A pilot program involving Nuro and the grocery chain Kroger is scheduled to kick off this fall in a to-be-announced city, meaning that in the autumn, people in a test urban area should be able to order groceries by app, then have them delivered by a little independent car. Here’s how the vehicle, which was designed from the ground up just for cargo, works.

In terms of size, the Nuro car is “pretty similar to a big guy on a motorbike,” says Nuro co-founder Dave Ferguson, who previously worked with Google’s self-driving car project, now called Waymo. The vehicle is about 6 feet high, 8 feet long, and 3.6 feet wide—about half a Toyota Corolla’s width. It’s electric-powered, with a battery system designed to last all day without a recharge, Ferguson says. It weighs around 1,500 pounds.

The produce-schlepper will go just 25 miles per hour, but will increase its max speed in the future. This generation of the vehicle has two main compartments, each of which can hold six grocery bags. In a future version, those two compartments will be able to hold 10 bags each—enough for some serious barbeque supplies.

Obviously, there’s no human on board to steer it around. For that, this car, like other self-driving vehicles, needs a perception system to see the world. A spinning laser unit at the top, called a LIDAR, uses light to measure the distance from the vehicle to objects. Cameras and radar units also have a view 360 degrees around the Nuro, the latter of which can also measure the velocity of moving objects near it. It has access to map data to know where it is, as well as GPS.

All of that means the car can the see the world around it. And since GPS might not be totally precise, the car’s sensors can help localize it, too. “It can effectively compare what it’s seeing with what it expects in the map, and it can use that to correct its position,” Ferguson says.

The little transporter will be driving around with goods onboard like eggs and hamburger buns, and not people, meaning Nuro can think about safety differently. That’s an even more important subject in the self-driving car world since one of Uber’s autonomous cars killed an Arizona pedestrian, despite the fact that a human safety driver was behind the wheel at the time.

“If you’re no longer trying to protect an occupant above all else, and in fact you’re trying to protect the most vulnerable road users—a pedestrian, cyclists—at all costs, then you can do things like self-sacrificing the vehicle,” he says. Given a situation where the car has to decide between hitting a person or a tree, Ferguson imagines, “we will always drive into the tree.” Or even, he says, a parked car.

“We’ve designed the whole front end of the vehicle to collapse,” he adds, “and to try to absorb as much energy as possible, in the case of any collision.”

How will the robot grocery system work?

Once the pilot program kicks into gear, it should work this way: a person in the delivery area will order the groceries they want via a Nuro app, or the Kroger website (the grocery chain already has a delivery service). After Kroger staff stock a Nuro vehicle with the goods, the car will set off for the customer’s house; the grocery customer will be able to follow the whereabouts of the car, like it’s an Uber.

Once it arrives, the human uses the app to gain access to the vehicle or a touchscreen to input a code. When they open the cargo door, they’ll have access to only their own groceries, Ferguson says, so no one swipes anyone else’s bananas.

Ride-sharing companies like Uber and Lyft are exploring self-driving car tech because ultimately, it could save money—you don’t need to pay a driver. Ferguson says that the idea behind this service is that it could bring groceries to people wherever they are: “We’re talking about being able to provide a service that is so lost cost that people can use it that currently don’t use any services,” he says.

Ultimately, the proof will be in the robot-delivered pudding during the pilot program this fall.