Our street lighting doesn’t need to be this bad

Light shines at full intensity even during periods of low activity. 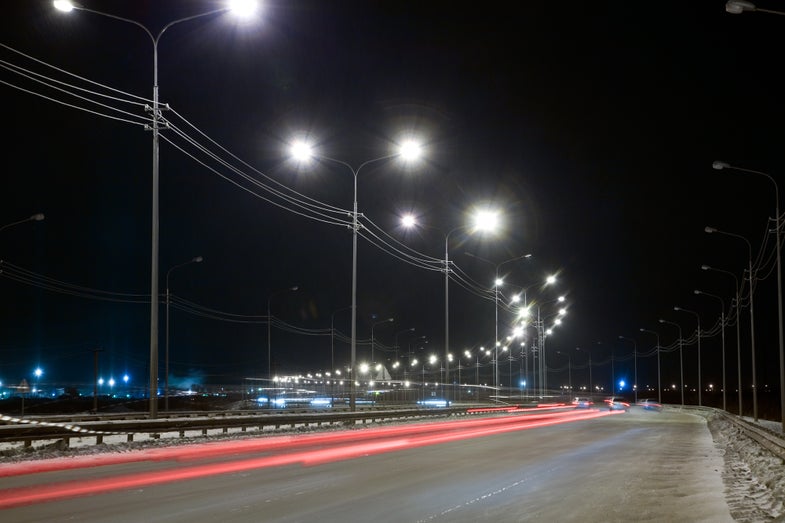 We need to adapt lighting to suit our needs. DepositPhotos
SHARE

Rajaram Bhagavathula is a Senior Research Associate at the Center for Infrastructure-Based Safety Systems at the Virginia Tech Transportation Institute. He is a team member on projects funded by National Academy of Sciences and Department of Energy that are evaluating the effects of roadway lighting on sleep health and alertness of road users.

Most streets are either too bright or too dark. Streets and roads without street lighting account for nearly a third of all the fatal crashes at night. When street lights are too bright they can cause light pollution, something that delays the maturity of crops, aggravates astronomers, and disorients wildlife like sea turtle hatchlings, which can wander inland instead of toward the sea, where they end up dying after being run over by cars or eaten by predators. Exposure to high amounts of artificial light at night has also been linked to disruptions in people’s sleep health.

My colleagues and I at Virginia Tech Transportation Institute are working to understand where we need street light, and how much we can get away with without sacrificing public health and the environment. At present, almost all street lights are turned on at night at full intensity even during periods of extremely low vehicular and pedestrian activity. Using lights at full intensity during periods of low activity wastes energy and adds to ecological damage.

We need light sources that can be dimmed or controlled intelligently. LED lamps have this “adaptive lighting” capability and, as a bonus, are up to 50 percent more efficient than traditional sodium vapor lamps.

If we have the technology, why are we still over-lighting our streets? Because bright road lamps have been shown to reduce nighttime crashes. But we’re using street lighting as a butcher knife when it could be wielded like a surgical scalpel. Lamps are too bright mainly because, over time, they get dirty and less efficient, so utility companies and lighting designers opt for unnecessarily intense lights. The other reason is that the traditional sodium vapor lamps—the light from these sources looks yellowish-orange—can’t be dimmed easily.

And over-lighting is just one lighting design practice that can disturb the surrounding environment. By rethinking the overall scheme for a road, a lot of ecological issues can be resolved. Let’s look at the city of Cambridge, MA and University of California (UC) Davis, both of which have implemented adaptive lighting strategies using LEDs. In Cambridge, street lights dim to 50 percent at dusk and to 30 percent of the total light output from 10 p.m. (8 p.m. in some neighborhoods) to sunrise. UC Davis, installed about 1,500 intelligent LED street lights that can detect when there was activity on a road. When the street is empty, they operate at 10 percent of the total light output. Upon detecting a car or someone on an evening walk, the lights brighten to 80 to 90 percent of capacity. Both Cambridge and the UC Davis have reported energy savings of over 80 percent. When Tucson, Arizona implemented similar strategies, its night skies became darker, according to the Dark Sky Association.

If adaptive lighting technologies save energy and reduce ecological and environmental impacts, why aren’t they more widely adopted? One possible reason is the high cost of the controller, which is something akin to a Wi-Fi receiver that receives commands wirelessly to dim lights. It costs up to $100 per light, though higher adoption rates could drive down the price of these technologies.

Another reason is the lack of proper knowledge about when and how much to dim. The lack of empirical research on the light levels required to maintain safety and security on the street means a lack of proper guidelines. And evidenced-based guidelines are essential for implementation by local governments. Researchers at Virginia Tech developed some preliminary guidelines, but further research will help better understand relationships between light levels, safety, and ecological impact.

A final hurdle for adaptive lighting: the way electricity is billed. The flat-rate billing used by many towns and cities in the U.S. does not create any incentives to reduce energy usage. Using a metered payment structure for street lighting has potential to create incentives for towns and cities to make more conscious efforts to reduce energy usage and create the drive to implement adaptive lighting.

So, how much light is needed on our streets? We’re not sure yet, but at least we’re finally asking the question.