A new proposal wants to cut fuel efficiency standards, and it's going after California to do it. 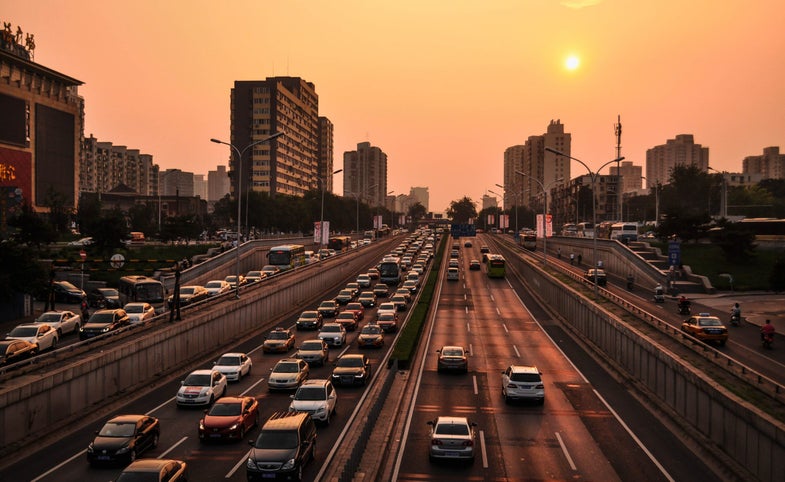 If you’d like to buy a more fuel-efficient car or pickup truck after 2020, think again. The National Highway Traffic Safety Administration and the Environmental Protection Agency just proposed a joint rule that turns future improvements to gas mileage and tailpipe emissions into a pipe dream.

Under new regulations proposed Thursday, advances in fuel economy, or how far cars can run per gallon of gasoline consumed, that began during the Obama administration would plateau after 2020 and remain constant through 2026. That means that in two years time, car manufacturers will no longer need to innovate new technologies for cleaner, more efficient vehicles.

Congress requires the National Highway Traffic Safety Administration to set fuel economy standards for each model year. The Environmental Protection Agency decides how much carbon dioxide, the primary greenhouse gas formed during fuel combustion, can be emitted in the exhaust. The two standards are set at the same time because fuel consumption directly affects the amount of carbon dioxide emitted.

Between 2012 to 2016, the average fuel economy requirements for U.S. manufactured cars and light-duty trucks increased from 29.7 miles per gallon to 34.1 miles per gallon. Gains in fuel efficiency for passenger cars and trucks were supposed to reach an average of about 50 miles per gallon by model year 2025.

But the new rule proposes to freeze fuel economy standards for model year 2020 onwards at an average of 37 miles per gallon for cars and trucks. It also takes away California’s right under the Clean Air Act to separately regulate tailpipe emissions for greenhouse gases.

In addition to forcing drivers to lose out on savings at the pump, the “EPA is missing the clear health benefits of having cleaner cars,” says Paul Billings, vice president of public policy at the American Lung Association.

“Today, we’re seeing the enormous impacts of climate change,” Billing says, citing increased extreme weather events in recent years from deadly wildfires to potent heat waves and powerful hurricanes. By keeping cars and trucks dependent on the fossil fuels that drive climate change, Billings says the EPA is “sticking their heads in the sand” and “driving us in the wrong direction.”

Other states lack this authority, but they can adopt California’s standards to regulate pollutants in exhaust fumes outside of carbon dioxide. This includes nitrogen oxides and volatile organic compounds, which react in the presence of sunlight to form ozone, or smog. Ozone inhalation can cause airway inflammation and reduced lung function, as well as worsen respiratory ailments like bronchitis emphysema and asthma. About two hundred counties in 22 states and the District of Columbia do not meet the most recent ozone standards, according to the EPA. This includes major cities like New York City, Washington D.C., Chicago, and Phoenix, as well as most of California.

Revoking California’s authority would be an unlawful and unprecedented attack on state’s rights, which the EPA championed under former administrator Scott Pruitt, Miller says.

In its justification, the EPA argued that stricter restrictions on carbon dioxide emissions were “no longer appropriate and reasonable.” The agency also reasoned that more fuel-efficient cars would encourage drivers to drive more, increasing the risk of car accidents. Higher sticker prices for cars with better mileage would also deter drivers from swapping their older, more dangerous cars for newer ones with better safety features, also increasing the risk of accidents.

“It’s really a tortured logic to say that cars on the road will be less safe if they’re more efficient,” Billings says. Consumer research shows that fuel economies have improved while new car prices have stayed about flat in the last 20 years. And though the number of cars on the road has been steadily increasing over time, the accident rate has been going down.

California attorney general Xavier Becerra tweeted that the state “will use every legal tool at its disposal to defend today’s national standards and reaffirm the facts and science behind them.” The Golden State is already leading a coalition of 17 states in a lawsuit to keep the original emission standards negotiated during the Obama administration.

Even car manufacturers weren’t thrilled with the rollback, despite having lobbied for a review of the fuel economy standards set under Obama, which they complained was too strict. Since California and the 16 states that have or are in the process of adopting California’s stricter emissions standards make up about 40 percent of the new car market, car makers are keen to avoid a scenario where they’d have to manufacture two sets of fuel economies for the same model car. The Auto Alliance and Global Automakers issued a joint statement urging the federal government “to find a common sense solution that sets continued increases in vehicle efficiency standards while also meeting the needs of America’s drivers.”