This new species of dinosaur looks like Zuul from Ghostbusters

I am become Zuul, Destroyer of Shins 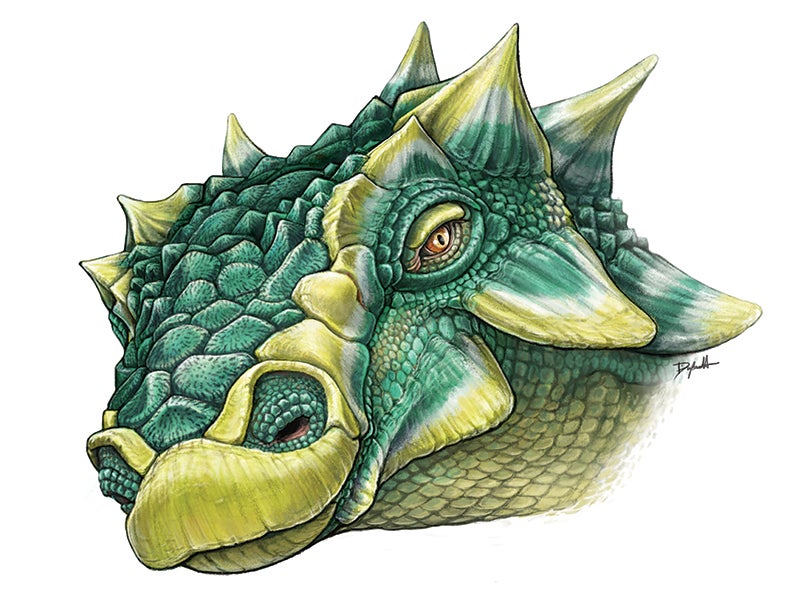 If you’re a paleontologist naming a newly discovered species, it’s important to know your beloved critter’s place in the pecking order. Not all animals—or dinosaurs, even—were masters of their domain. Not everyone can be a Rex. Case in point: Zuul crurivastator, a short-snouted Late Cretaceous dinosaur whose new name translates to “destroyer of shins.”

Crurivastator is from the Ankylosauridae family of armored dinosaurs. But in addition to having the standard ankylosaurid knob of bone at the end of its 10-foot-long tail, this species also boasts rows and rows of sharp, menacing spikes.

“I’ve been working on ankylosaurs for years, and the spikes running all the way down Zuul’s tail were a fantastic surprise to me—like nothing I’ve ever seen in a North American ankylosaur,” Victoria Arbour, a member of the Royal Ontario Museum team that recently published its findings on the creature, said in a statement. “It was the size and shape of the tail club and tail spikes, combined with the shape of the horns and ornaments on the skull, that confirmed this skeleton was a new species of ankylosaur.”

The bones, which make up one of the most complete and well-preserved skeletons ever pulled from the fossil-rich Judith River Formation in Montana, suggests a sledgehammer-like tail that could have been used to intimidate predators and fellow shin-destroyers alike.

“I had really wanted to use [the name] for a long time and I was saving it for a specimen with a really well preserved tail,” Arbour told The Atlantic. “I wasn’t going to get a better choice than with this fellow.”

But wait, there’s more: The first half of Zuul crurivastator‘s name—the genus it may one day share with as-yet-undiscovered close cousins—is a nod to the “Gatekeeper” of the Ghostbusters franchise. The researchers have pointed out, quite rightly, that the new species bears a strong resemblance to Zuul. Not this Zuul:

Leading experts are all in agreement:

Huge thanks to Ghostbusters writer and star Dan Aykroyd for stopping by @ROMtoronto to meet our new #dinosaur Zuul crurivastator! #DinoZuul pic.twitter.com/pmEwGVHxwf

But while goofy names are all well and good, this demigod shin-splinter is contributing some seriously cool research opportunities. Most tail-clubbed armored dinosaurs are only found in small pieces—and until now, scientists have never found a specimen in possession of both a head and a tail. But they can certainly make heads and tails of Zuul.

“The preservation of the fossil is truly remarkable. Not only is the skeleton almost completely intact, but large parts of the bony armor in the skin are still in its natural position,” study author David Evans said in a statement. Some soft tissues were even preserved, giving the team a chance to see what the beast really looked like—and investigate the actual composition of the scales and spike-sheaths that made these armored herbivores look so tough. The team plans on looking for traces of molecules like keratin and collagen—the proteins that make up our own skin, teeth, hair, and nails. They’ll also use the new species’ completeness as a roadmap when they’re puzzling out more mysterious specimens in the same family. Seeing how Zuul‘s pieces fit together can help them fill in the gaps when other animals are less forthcoming.

“This is a really useful specimen, we can visualize what it looked like while it was alive, and it will also help with isolated bones [of other animals] and give us an idea of what we’re looking at,” Arbour told the CBC. “It’s kind of like a Rosetta stone in some ways.”