FYI: What Kind Of Dinosaur Meat Would Taste Best?

And what cut would be considered a delicacy? 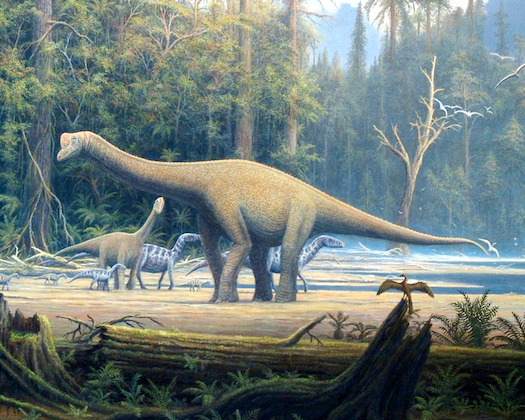 An ostrich-like dinosaur known as an ornithomimid would probably yield the most consumer-friendly cut of meat, while still maintaining a unique dinosaur taste.

Much of the flavor in a cut of meat comes from its fat composition, and an animal’s diet contributes significantly to this. However, due to the average consumer’s taste for meat that is not too strong-tasting, it is more important to figure out what we don’t want the animals we consume to be eating. Dinosaurs that ate marine animals would definitely be off the list, not only for their fishy flavor, but also because the high amount of oil in fish would make the meat more susceptible to oxidation, which would give it a rancid taste. In fact, any carnivorous dinosaur would not fare too well in the supermarket. Most people prefer meat that comes from herbivorous animals—think cow, deer, bison— since animal fat found in a carnivore’s diet adds a significant amount of “gamey” flavor. And some dinosaurs’ diets are far too unappetizing to consider.

“When people ask me if a T-Rex would be good, well, I don’t think so,” David Varricchio, professor of paleontology at Montana State University, says. “They’ve found jaw abnormalities that suggests they were eating fetid meat and had diseases that came about from prey items. They would be pretty parasite-laden.”

Just as important in the search for the best cut of dinosaur meat would be the level and type of activity for which the dinosaur was built.

As for exactly which dinosaur would be most appetizing, one with red meat would have just enough flavor as compared to one with blander white meat. Theories that dinosaurs would have tasted like chicken abound since dinosaurs are so closely related to birds, but for many land-dwelling dinosaurs, beef may be a closer guess. The kind of activity an animal does determines what kind of meat it yields. Red meat is composed of slow-twitch muscle fibers, which are built for sustained periods of activity, so animals that are active for longer amounts of time throughout the day would be composed of mostly red meat. Those who ambush their prey or move quickly for short periods of time would have white meat, which is composed of fast-twitch muscles that allow for quick bursts of activity. So dinosaurs taking part in extended periods of activity would probably have muscles less like a chicken (or even a fast-acting predator like a cheetah) and more like a steady-moving cow. 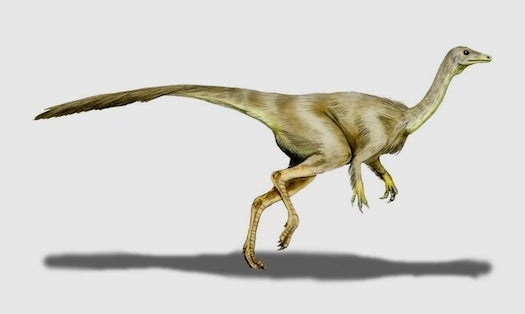 Ornithomimosaurs were a group of ostrich-like dinosaurs that were part of the suborder Theropoda from which modern birds evolved. They were close enough to birds that they likely had feathers and were warm-blooded, but they were very active animals with large hind legs for prolonged periods of running, so their muscles would probably have been mainly slow-twitch, less like modern birds. Though most theropods were carnivorous, ornithomimids were unique in that they had no teeth, a fact that has led most to believe they ate mostly plant matter.

“About 80 percent of the ornithomimids were hindquarters, and they were really well-suited for running,” Varricchio says. “I’ve also done a little work on their bone histology and it’s safe to say they’re relatively fast-growing. I think it would be a lean, slightly wild-tasting red meat.”

That’s not to say other dinosaurs wouldn’t make a tasty meal either. Velociraptors, being wild ambush predators, may have had gamier-tasting white meat comparable to a carnivorous bird such as a hawk. Taking into consideration activity level and diet could yield a huge variety of possibilities were dinosaurs ever to roam our pastures and grocery stores.

“You could get into cuts of meat. Armored dinosaurs mainly used their tails for defense, so that would probably be a lot of good white meat. Hadrosaurs were quadrupedal and spent much of their time on the move; I suspect they would be largely red meat,” Varricchio says. Sauropods, the largest animals to ever walk the earth, may have made for an interesting meal as well. Their long necks, used to reach high-up food sources, could have resulted in a unique cut of sturdy red meat weighing several tons. Says Varricchio, “Sauropod neck could be a delicacy.”

Florida native Erin Berger is a junior at Northwestern University. She is studying journalism and anthropology with a special interest in health, social justice and, of course, dinosaurs.