This ancient dinosaur relative looks surprisingly like a crocodile

Another lizard-esque carnivore to love 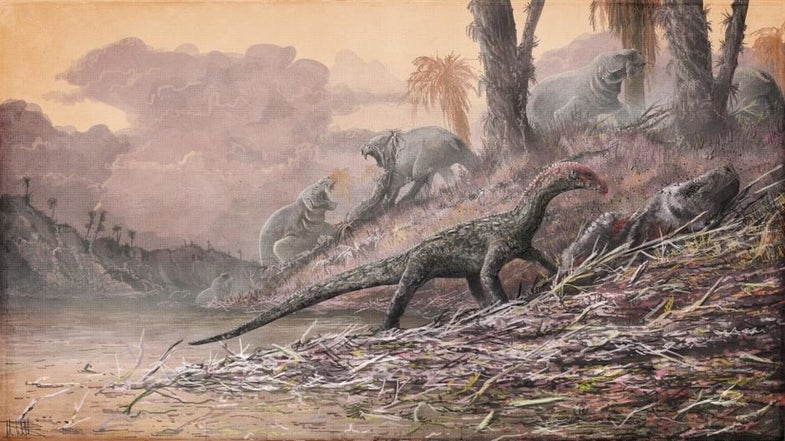 With advanced tech like laser scans that can peer deep into fossils—along with old-school methods like painstaking excavations of ancient bones—we’re learning more about dinosaurs every day.

But what about the animals that came just before dinosaurs? A study published in Nature on Wednesday sheds some light on an intriguing, lizardy carnivore a few rungs removed from dinosaurs on the evolutionary family tree.

Paleontologists thought for years that early dinosaur relatives would look like, well, dinosaurs. But as it happens, they look a heck of a lot more like animals that are still around today: the crocodiles.

“Teleocrater fundamentally challenges our models of what the close relatives of dinosaurs would have looked like,” Richard Butler, an author of the paper said in a statement. “Dinosaurs were amazingly successful animals. It’s natural to want to know where they came from, and how they became so dominant. Teleocrater is hugely exciting because it blows holes in many of our classic ideas of dinosaur origins.”

Teleocrater rhadinus walked on this Earth on four stout legs 245 million years ago, 10 million years before most dinosaurs ever tromped on the Earth. (There’s one dinosaur claimant from about 243 million years ago.) It was a large lizard-like critter with a long neck and tail about 7-10 feet long that chowed down on other animals, like the distant mammal-relative cynodont.

Their relationship to dinosaurs isn’t easy to define. They’re not direct ancestors of dinosaurs, and they definitely didn’t evolve into dinosaurs. They’re more like cousins removed by a few million generations. If they ever met at a large bird/lizard-like family reunion in the sky, they’d probably smile and nod vaguely at each other over the barbecued cynodont before frantically whispering to their respective spouses “who was that again?”

But these new fossils do help fill in an interesting chapter in dinosaur family history. Crocodiles, dinosaurs, birds, and Teleocrater rhadinus are all archosaurs, a large group of animals defined in part by their skull shape. About 250 million years ago, archosaurs split into a group that would eventually include crocodiles, and a group that would eventually become birds and dinosaurs. Teleocrater rhadinus belongs to the latter branch, but looks a lot like members of the former branch, which is why researchers are really excited about it.

There are other reasons they’re excited about it too. This particular not-dinosaur actually has a long history in the paleontology community. A paleontologist named F. Rex Parrington dug its bones out of the ground in Tanzania in 1933. Then it was stored in the Natural History Museum of London for a few decades until it was unearthed from the collections by another paleontologist, Alan J. Charig, in the 1950s. Charig gave it the tentative name Teleocrater before he died, but didn’t have enough of the fossil to actually get together a full picture of its importance.

New Teleocrater rhadinus specimens found in Tanzania in 2015 helped to finally bring his work to a conclusion, as a group of researchers from Russia, Sweden, the U.S., the U.K., and South Africa all worked to get the research published.

Charig died in 1997, but is widely credited with re-invigorating public interest in dinosaurs in Britain during the 1970’s. Though he died 20 years before the study was written, his influence loomed so large that the researchers added one last name to the paper’s list of authors: Alan J. Charig.