Stomach contents from the armored dinosaur reveal it was grazing on a landscape recently scoured by fire. 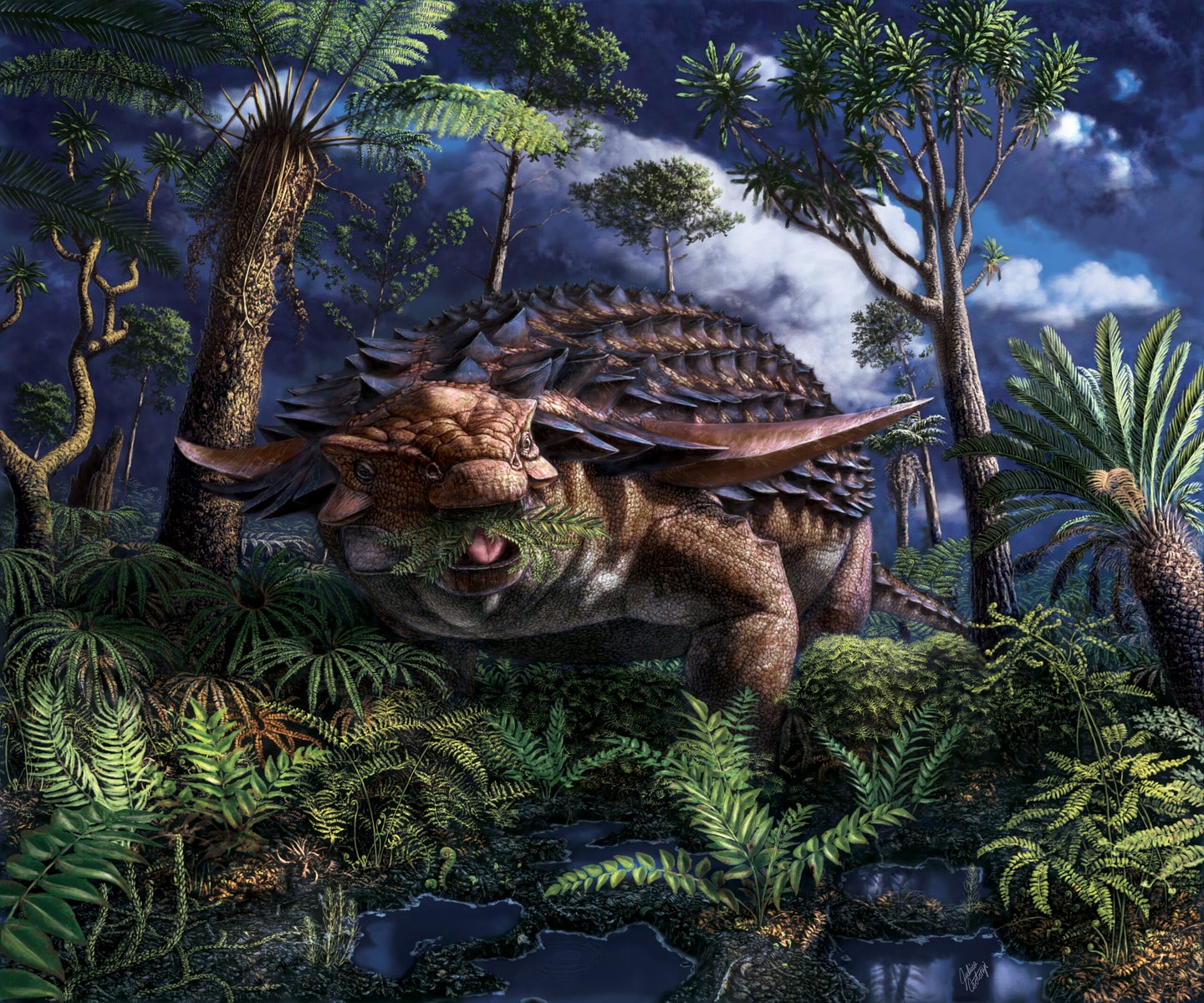 With the help of a mummified fossil, paleontologists got an incredibly rare look at a dinosaur’s last meal. Illustration by Julius Csotonyi, Royal Tyrrell Museum of Paleontology
SHARE

A mummified armored dinosaur found in present-day Canada is giving paleontologists a peak into the eating habits of herbivores that lived 110 million years ago. Fossilized plants preserved in the carcass’s belly reveal that it was dining on a fresh crop of ferns that sprung up after a fire. The soccer ball-sized mass was full of a select few varieties of ferns with traces of charcoal mixed in. Researchers surmise that the dinosaur was a choosy eater and that forest fires might have played an important role in its lifestyle.

It’s incredibly rare for a dinosaur’s last meal to be so well preserved, says Caleb Brown, a paleontologist at the Royal Tyrrell Museum in Drumheller, Alberta who published the findings June 2 in the journal Royal Society Open Science. “We finally have some really good, definitive evidence about what at least one particular animal was eating,” he says. “This is by far the best evidence of diet for an herbivorous dinosaur.”

The dinosaur that Brown and his colleagues examined was discovered in a mine in northern Alberta in 2011. It belonged to the nodosaur family, which in turn was part of a larger group called ankylosaurs. Like its iconic relative Ankylosaurus, this dinosaur was covered in bony plates. It also had a large spine protruding from each shoulder and trundled along slowly on short legs. “They’re very squat, round animals—basically the dinosaur equivalent of a tank,” Brown says.

This particular specimen would have weighed at least a ton-and-a-half while alive and reached 18 feet in length. It probably lived along a coastline during the Cretaceous Period before dying suddenly and being swept out to sea. There it sank to be buried deeply in mud on the seafloor, protected from storms and scavengers. A tomb of brittle rock formed around the carcass, sealing it off from the outside world and preserving features that otherwise would have rotted away. When Brown’s colleagues excavated the remains, they found skin and keratin as well as fossilized bones. The team reported their initial description of the nodosaur, which they named Borealopelta markmitchelli, in 2017.

For the new study, the group turned their attention to the nodosaur’s stomach contents. When they examined small slices under the microscope, the researchers saw “beautifully preserved” plant fragments that included leaves, bits of stem, and charcoal from burnt wood, Brown says. Based on the maturity of the plant tissues, the team concluded that the dinosaur died in late spring to mid-summer, which would have been the middle of the growing season.

Brown and his colleagues observed that about 85 percent of the leafy fragments in the dinosaur’s belly represented several types of ferns. “What is surprising is some of the stuff that’s not there,” he says. Some common plants like horsetails were completely absent, while foliage from cycads and coniferous trees that dominated the landscape were present only in very small amounts. The nodosaur may have preferred certain kinds of ferns over others, munching on these favorites while ignoring the rest.

The remains were discovered in an ancient seabed, removed from the dinosaur’s natural habitat. However, the researchers knew which plants would probably have been most common based on fossilized vegetation from other nearby sites. This gave them a sense of which plants the nodosaur might have encountered but chose not to eat.

The presence of charcoal indicates that a forest fire had recently swept over the landscape. As vegetation began to return, the short young plants would have been easy for the squat nodosaur to reach. “The thing about that regrowth is that it’s more nutritious and easier to digest than the old, mature growth from any of these plants,” Brown says. “If you’re an ankylosaur…the best place to be is an area that’s recently been burned up by a fire where all these ferns are coming back.”

Today, many large grazing animals—including elk, deer, zebras, wildebeests, and other denizens of forests and savannas—seek out areas that have recently been scorched. “This might be the first evidence of dinosaurs taking advantage of forest fires as part of their ecology,” Brown says. “We know that forest fires were quite common during that time, but we’ve never really considered that the forest fire…might actually be a very important aspect of how they made a living.”

However, he adds, there’s only so much that scientists can infer from one carcass’s stomach contents. The food was consumed by a single dinosaur over a matter of hours and may not represent the nodosaur’s typical diet. However, if scientists find charcoal in the stomach contents of other dinosaurs that browsed close to the ground, it would lend support to the idea that these herbivores thrived in forests that were recovering from wildfires.