The rare and mysterious Deepstaria jellyfish looks like a cross between a plastic bag and a Victorian spectre. 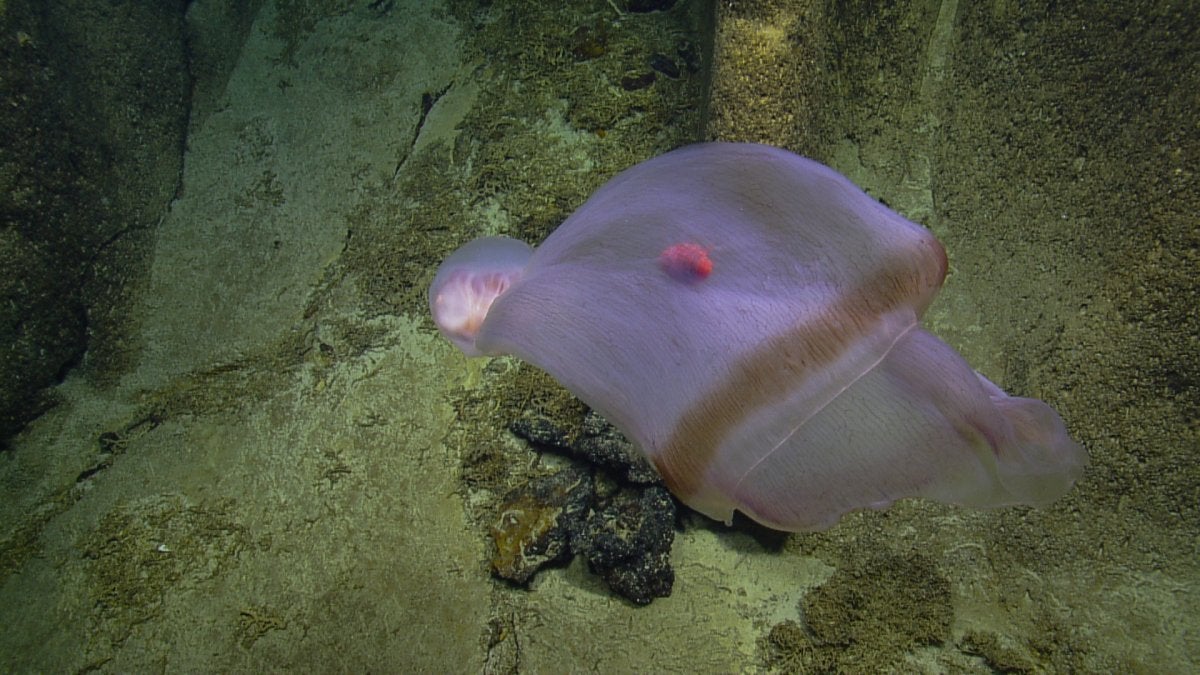 The Deepstaria jellyfish is up there with Dracula and the ghost of Jacob Marley on my list of “Spooky things I do not want to see floating quietly outside of my window.” But for a team of scientists aboard the exploratory vessel Nautilus, glimpsing this ghostly jelly was a delight, and an opportunity to document a largely unknown species in its natural habitat.

Deepstaria is as mysterious as it is rare, a shapeshifter whose body exists somewhere on a spectrum between enormous trash bag and ghostly lampshade. Last week, these researchers used a remotely operated vehicle to capture a video of the freaky jelly.

The jellyfish in the video is roughly the size of a trash can. This deep-sea jelly lacks tentacles, and appears in the shape of a thin, membrane-like bell. Up close, you can see a geometric mesh pattern made up of canals that provide structural support and deliver nutrients to the body. In 2015, Wired referred to it as a “floating blanket.”

In case it hasn’t been made clear, the Deepstaria is a strange creature. The true joy of this video is hearing the team try to suss out, in real time, what in God’s name they’re looking at. “What is it thinking?” one scientist muses, camera zooming in on its pink, fleshy, brain-like region (actually the gonads). “What are we thinking?” his colleague retorts.

The team watches as the animal swoops, undulates and puckers like a possessed plastic bag. But this mesmerizing movement isn’t what makes the video so valuable for scientists.

This video represents the rare instance of observing the jellyfish in its natural, undisturbed state, says Brennan Phillips, an engineer who has worked on prior Nautilus expeditions. Normally (99.9% of the time, according to Phillips) Deepstaria is shaped like an upside-down bucket, just hanging out trying to catch prey (this is the shape it appears in during the first 40 seconds of the video).

The jelly’s behavior wasn’t affected until the remotely operated vehicle got close, says Philips The contortions it makes during the rest of the video are actually due to the thrusters on the ROV.

These abyssal jellies are also seldom found without an isopod hitching a ride inside of them. Yup, the bright red mass inside the jelly is alive, and it’s a distant cousin of the pillbug.

Deepstaria and this “resident isopod” might maintain a sort of symbiotic relationship. The isopod gets protection and food scraps. It’s unclear what the jellyfish gets.

There are currently only two species of Deepstaria: Deepstaria enigmata and Deepstaria reticulum. Not much is known about their feeding habits, behaviors, or distribution. Perhaps, these scientists will find some answers as they continue to explore the deep.

This article has been updated to reflect the fact that Brennan Phillips has indeed worked on deep sea expeditions to study the Deepstaria jellyfish, but not the project represented in this current video.