As floods in the Bahamas stymie rescue teams, the US prepares for a similar soaking Thursday night. 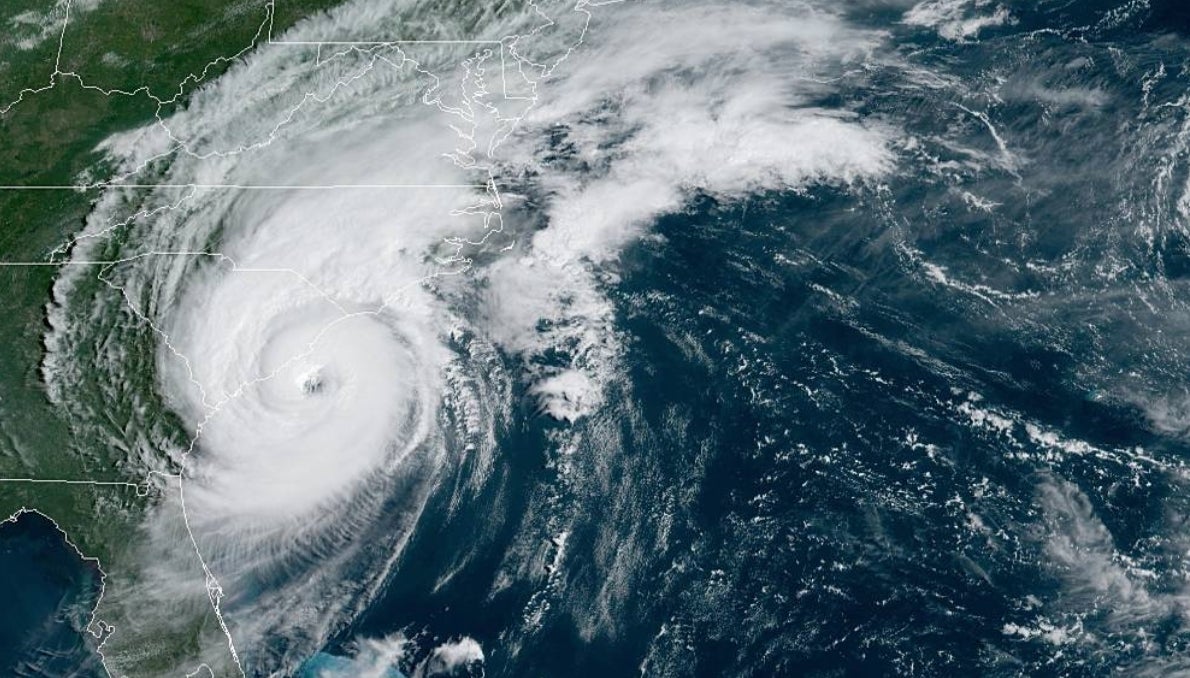 Hurricane Dorian has cemented its status as a historic storm with several benchmarks, and it’s not over yet. After hitting the Bahamas as a catastrophic Category 5 with sustained winds of 185 mph over the weekend—the strongest hurricane ever to make landfall there and the second strongest to hit the Atlantic basin since 1950—Dorian then crawled just 30 miles in 30 hours, marking it one of the slowest storm trajectories in recorded history. Now, after briefly weakening to a “minor” Category 2 storm, Dorian has regained major hurricane status just in time to pummel the Carolinas.

Hurricane Dorian finally gave Grand Bahama some respite on Tuesday, weakening to a Category 2 as it moved toward Florida and began churning up the southeastern coast of the U.S. with maximum sustained winds of 105 mph. The storm’s broken eyewall (the strongest part of the storm) redeveloped on Wednesday night, indicating that Dorian was becoming more organized and was therefore gearing up to regain some of its former wind speeds. Sure enough, Dorian is now a Category 3 hurricane with sustained winds of 115 mph. It’s currently moving up the coast of the Carolinas, causing increasingly dangerous winds there and in Georgia and already resulting in serious floods. A Thursday-night landfall is possible in North Carolina, but the storm’s winds and storm surge will pose a serious threat even if Dorian stays offshore.

The center of #HurricaneDorian, seen here by NOAA's #GOESEast, is moving close to the #SouthCarolina coast this morning. The Category 3 storm is already producing very heavy rainfall along the #NC and #SC coasts. Follow the storm via our hurricane tracker: https://t.co/dhw0zOk2i6/ pic.twitter.com/cuaB7aWWjJ

Gusts will be strong enough to cause “devastating damage,” according to the NHC, with major damage to well-built framed homes, snapped and uprooted trees, road blockages, and water and power outages for days or weeks after the passing storm.

What the U.S. can expect from Hurricane Dorian in the coming days

Market Street is about a foot deep in water as #Dorian gusts blow rain sideways in downtown #Charleston. More than 100k are without power #chswx pic.twitter.com/lblW7sA4WL

According to the latest from the NHC, the center of the storm will continue to approach the coast of South Carolina through Thursday and move near or even directly over the coast of North Carolina on Thursday night or Friday. Luckily, Dorian is currently moving at a respectable 8 mph—some eight times faster than its trek over the Bahamas—and is expected to pick up some more speed on Friday, bringing it away from the coast as it moves north. Tropical storm watches are in effect for Massachusetts from Woods Hole to Sagamore Beach and in Nantucket and Martha’s Vineyard, indicating those areas could see tropical storm conditions in the next 48 hours. Dorian’s current track could bring it over Nova Scotia on Saturday, when it may still carry hurricane force winds. a

Dangerous storm surges and flash floods are likely throughout Georgia and the Carolinas in the coming days, and a few tornadoes are possible in the area. Officials in North Myrtle Beach, South Carolina, report that at least two tornadoes have touched down there so far.

How bad has Dorian been so far, and why is the storm so dangerous?

As Jeff Berardelli reported for CBS last week, it was an unexpected shift to the east that gave Dorian the chance to grow into such a historic hurricane. The storm was rather lopsided, which dragged the worst bit of it away from Puerto Rico as it passed over. Less time spent on land kept Dorian strong—hurricanes are fueled by warm ocean water, so they weaken as they cross dry terrain—and conditions were perfect for the system to continue growing stronger as it barreled toward its next landfall. Its slow movement over the Bahamas only amplified its destructive power.

Circumstances continued to skew in the storm’s favor. The Washington Post reported last week that Dorian would coincide with some of the highest tides of the year. Florida is experiencing “King Tides,” an unscientific term that refers to exceptionally high waves. This is the natural result of the sun, Earth, and moon being aligned in such a way as to maximize the gravitational pull on our oceans, but combined with a recent rise in normal sea levels and the effects of a rain-heavy hurricane, the result is some monstrous flooding. Inland residents are not immune to this danger, and floods could persist long after the storm has passed.

On Tuesday Dorian had weakened to a Category 2 storm, but only after spending more than a day stalled out over Grand Bahama island. NASA reports that parts of Grand Bahama and the Abaco Islands saw over two feet of rain accumulation, and thousands of homes have been wrecked with tens of thousands of residents left without drinking water. Twenty people are already confirmed dead on the Abaco Islands as a result of the storm, and officials expect that death toll to rise as rescue efforts, which have been slowed by persisting floodwaters, continue in the coming days. Prime Minister Huburt Minnis said at a Wednesday news conference that the storm had caused “generational devastation,” with entire neighborhoods obliterated and Grand Bahama’s only international airport left in ruins. Dorian’s decimation of the Bahamas is a reminder of just how deadly a sluggish hurricane can be.

As it stalled out, portions of the islands endured:
hurricane-force winds for over 36 hours,
cat 2 for >24 hrs,
cat 3 for 6-12 hours! pic.twitter.com/H57J8oNTkE

Why a slow-moving hurricane is a bad thing

A hurricane’s cyclone may whip winds around at more than 100 mph, but the storm system itself travels like a bobbing cork in the swirl of larger atmospheric currents. When conditions keep a storm moving over land at a slow crawl, areas have to endure the resulting wind and rain for far longer.

This is dangerous for a few reasons. First, of course, longer periods of rain mean more water accumulation on the ground, making lethal floods more likely. The lingering presence of a hurricane also allows more time for storm surge—where the ocean rises rapidly due to pressure changes around it and causes flooding—to build to dangerous heights. But sustained rains and wind also put cumulative stress on buildings and roads. A house might be capable of withstanding an hour of 185 mph winds with only moderate damage, but might not be able to hold up after several hours at those speeds followed by a full day of slightly less intense hurricane gusts. A storm stalling out over land and moving as slowly as Dorian can leave even a well-prepared community in ruins.

Harvey and Florence come to mind when we talk about slow-creeping hurricanes, and the string of such storms in recent memory is enough to make many speculate about whether this is the new normal. In June, researchers from NASA and the National Oceanic and Atmospheric Administration (NOAA) published evidence of exactly that. According to that study, North Atlantic hurricanes have been moving slower over the past 70 years, leading to more storms that stall out and dump catastrophic loads of rain before finally moving on.

While we need more research to know exactly how hurricanes are changing and why, there is some evidence that climate change could play a part. With the Arctic warming faster than the rest of the planet, the typical contrast between cold northern winds and warm tropical air is evening out. These temperature differences drive our global air currents, so an Arctic that’s creeping up on the tropics could help create an Atlantic basin full of slow-creeping hurricanes.

How dangerous is Hurricane Dorian going to be for the U.S.?

Category 3 hurricanes are serious: When wind gusts reach 111 mph, they can seriously damage even well-built houses and down trees, limiting the access of emergency services and potentially cutting off power and access to clean water for weeks.

But it’s important to remember that hurricane categories only factor in windspeed. That’s why there’s nothing higher than a Category 5; once winds are faster than 157 mph, they’re going to cause roughly the same amount of horrific damage until they break the laws of nature. But as the last few hurricane seasons have so brutally demonstrated, wind is just one factor in a hurricane’s ability to cause death and destruction. The most dangerous hurricanes in recent history have carried huge storm surges, where the ocean rises rapidly due to pressure changes around it and causes flooding. Wind speed can contribute to the height of a storm surge, but so can the storm’s size, as well as where it makes landfall and how slowly it moves over land.

Why does this matter? Because Dorian should continue to weaken as it slinks up the coast, but that shouldn’t make people in its path complacent. Minor hurricanes can be deadly, too, and we have every reason to believe Dorian will cause life-threatening flooding both on the coast and inland even if it does not make landfall at all. Dorian’s return to Major Hurricane status is bad news, but that doesn’t mean a slip back down to a Category 2—or even a Category 1—would mean folks in its path were out of the woods.

Check out our guide to hurricane preparedness to make sure you have everything you need. If you’re on a southern vacation without a way to get out of harm’s way, read our guide to handling a natural disaster as a tourist. Check local forecasts and the National Hurricane Center website for updates, and use our handy hurricane glossary to help navigate confusing forecasting jargon.

This article has been updated. Check back here for further updates as the forecast develops.