The Amazon rainforest is burning, and humans are to blame

The blaze can be seen from space. 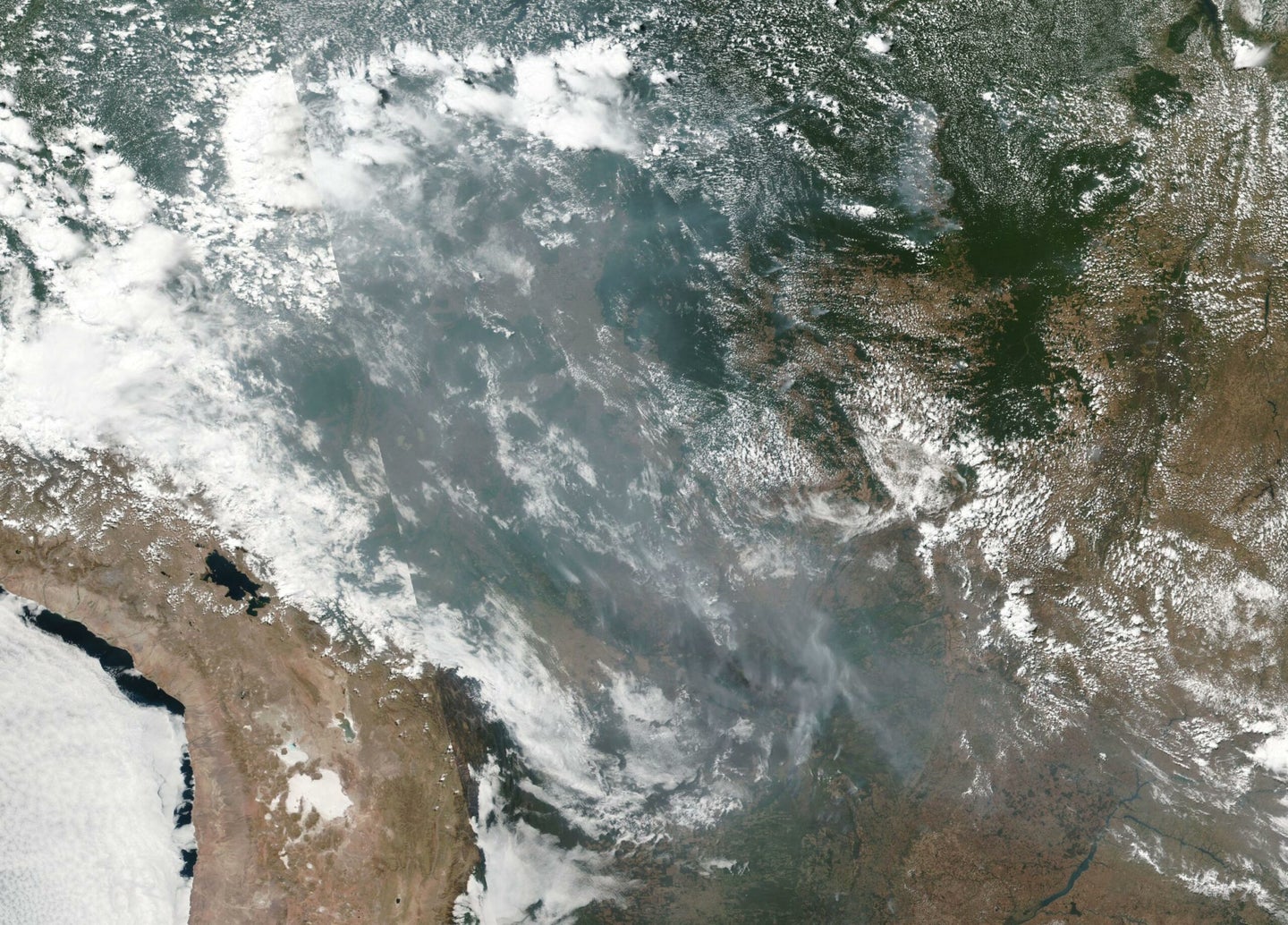 The Amazon blaze is so large, NASA satellites spotted it from space. Above, the agency captured several states within Brazil including Amazonas, Mato Grosso, and Rondônia. NASA
SHARE

Dark skies over Sao Paulo this week were just a local hint of an unfolding global catastrophe centered in Brazil. This year, the Amazon rainforest is burning at an unprecedented rate, after historic deforestation in the wake of the election of right-wing president Jair Bolsonaro.

Bolsonaro, who was elected on an explicit platform of destabilizing the systems put in place to protect what remains of Brazil’s 60-percent share of the Amazon, has said he’s skeptical of those numbers and that he thinks the fires have been started by non-governmental organizations that are upset by being defunded. What’s being done by the Brazilian government to halt the fires is unclear.

This is big news, because what happens to the Amazon will affect the global climate. Here’s what you need to know:

The fires currently raging in the Amazon aren’t wildfires: they’re the last step in deforestation, Ane Alencar, scientific director of the Brazilian NGO Institute of Environmental Research in Amazonia (IPAM), told Mongabay. Landowners “cut the trees, leave the wood to dry and later put fire to it, so that the ashes can fertilize the soil,” she says. That cleared land becomes pasture grass for beef cattle.

Deforestation in the Amazon has had unpredictable effects

Clearing swathes of the Amazon rainforest for farming like cattle ranching among other reasons like logging has fundamentally changed the environment of the rainforest. Parts of the Amazon do experience dry seasons, and can have forest fires, but nothing on this scale, says University of Florida anthropologist Michael Heckenberger.

Heckenberger does research in a region in the southern part of the Amazon that has been hardest-hit in terms of deforestation. “I work with indigenous peoples on an indigenous reserve,” he says. “They do pre-burns and other fire control things, and it has had an extremely important effect.”

Because the reserve lands are maintained using indigenous land use practices, there’s very limited deforestation, he says. It’s still threatened, however, “because the general ecological systems are drying out. Even in areas where there isn’t physical deforestation, there’s die-off and susceptibility to fire.”

The Amazon, in its pristine form, creates its own weather. But Heckenberger says “ what we’re seeing this year is further evidence that deforestation and climate change are conspiring to essentially create an oscillation from what was formerly fairly dense tropical forest to something else, some open woodland or savannah regime.”

Brazilian government fire management services (and the Brazilian environmental protection agency generally) have been significantly defunded in the wake of Bolsonaro’s election, something Heckenberger says is making it harder to manage fires.

Deforestation itself has more than doubled against last year’s numbers, according to satellite data from Brazil’s National Institute for Space Research. Bolsonaro fired the head of the space agency over this data on Aug. 2, saying the data was false.