In a small desert ceremony, the military prepared to defend the heavens 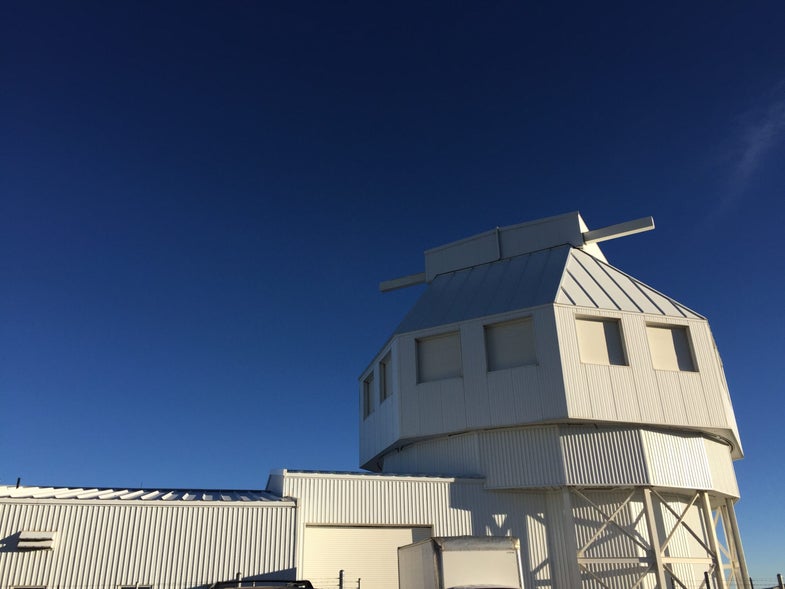 When we look up at the stars at night, we are staring into an infinitely deep ocean, a void filled with endless layers of deeper, farther lights. Most telescopes seek the outer limits of our universe, or document celestial phenomena on the edges of human comprehension. DARPA’s Space Surveillance Telescope, which the agency handed over to Air Force Space Command yesterday, is all about mapping the objects close to Earth. Its job is to plot the closest layer of space by discerning which bright objects are moving in geosynchronous orbit, and filtering out everything else.

The Space Surveillance Telescope, or SST as everyone referred to it yesterday, is one of DARPA’s longest-running projects. Typically, DARPA likes projects that finish in three years, from concept to prototype to something that can be refined into a useful tool for national security or the military.

SST started in 2001, and yesterday marked the telescope’s transition from a DARPA experiment into an Air Force asset. (Besides air, the Air Force claims both cyber and space as domains, ensuring the service has a hand in protecting both the internet and satellite television.) The telescope first opened its eye to stare at the night sky in February 2011. Sitting at 8,000 above sea level on top of North Oscura peak in New Mexico’s White Sands Missile Range, it is the 10th largest telescope in the continental United States and the 38th largest in the world. 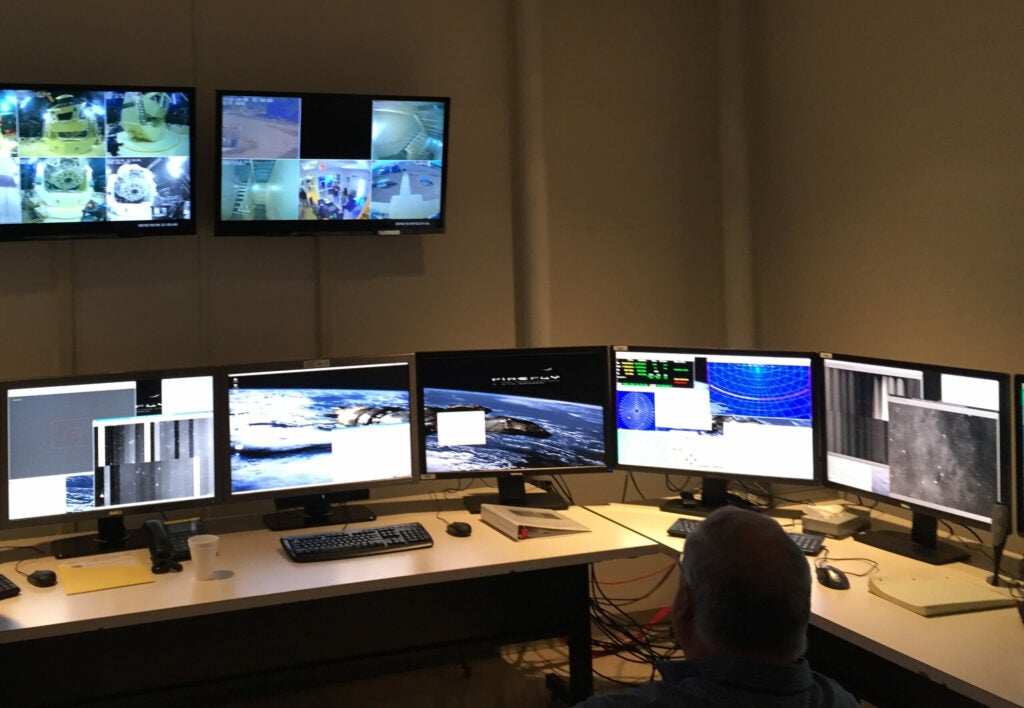 At the transition ceremony, our hosts clarified that the telescope captured the pictures of starfields, and is at the wrong angle to see a Firefly-class starship from above.

Key to the SST is a sensor that MIT’s Lincoln Labs started working on in 1998, though the idea was theorized earlier. Using an array of curved Charged Coupled Devices, the telescope can record images from curved mirrors without distortion. Ultimately, this could feed more compact optic systems, and differently shaped ones: instead of the flat planes of modern cameras, curved CCDs could lead to spherical cameras, where the distortion is less. James Gregory, a materials scientist working with Lincoln Labs, says that the tech could redesign optics to get rid of astigmatic aberrations. Not all DARPA projects lead to technology that goes beyond military use, but the imaging devices put to use in the Space Surveillance Telescope might reshape cameras.

The telescope captures a vast picture: 100 million pixels, according to deputy DARPA director Steven Walker. It takes just one person to operate, and that person can operate it remotely, or set the telescope to scan the sky autonomously. And it captures a lot of information, with the camera gathering and saving half a terabyte of data on a typical night scan (the amount of data collected varies depending on the mission and other variables). The whole apparatus is immense, weighing 225,000 pounds.

The project’s stated goal is to track objects in geosynchronous orbit, the part of space that’s most immediately valuable to people on Earth. A satellite in geosynchronous orbit moves in time with the planet’s rotation below, so that it is always located over the same spot. Geosynchronous satellites broadcast television, give us GPS coordinates, relay communications, and film the earth, giving us everything from weather information to detailed surveillance for governments with satellites. And as a business, the satellite industry generates hundreds of billions of dollars of revenue a year.

America was not the first nation to put satellites into space; deputy DARPA director Steven Walker reminded the audience at Tuesday’s proceedings that DARPA was created after Sputnik shook America out of complacency. Since the end of the Cold War, the United States has been the biggest benefactor of satellites in orbit, with 576 satellites in orbit presently, and a military that’s operated for decades with the security that the tools they had in space would continue to provide valuable information to people on the ground. 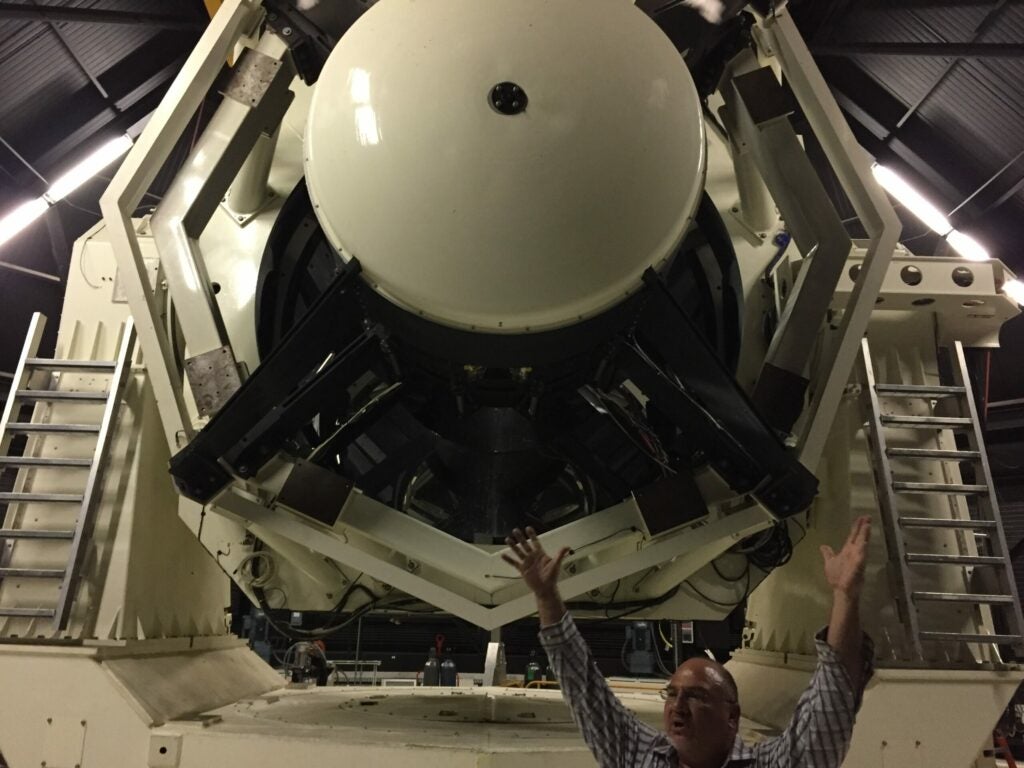 Front Of The Space Surveillance Telescope

Here, Peter Trujillo of MIT’s Lincoln Labs demonstrates how wide a slice of the sky this telescope can capture.

Now, the United States Air Force is less sure. Major General Nina Armagno, director of strategic plans, programs, requirements and analysis for Air Force Space Command, told the assembled crowd at the hand-off ceremony that by 2025, “Russia and China can hold any of our space assets at risk.” In 2007, China shot down one of its own satellites with a missile, and the same basic ballistic technology that can put an object into space can carry an explosive to destroy an object that’s already there.

The Space Surveillance Telescope isn’t a complete answer to the threat of nations blowing up each other’s satellites. It is, according to both DARPA and the Air Force, the first step to an answer. By providing Space Situational Awareness (acronymed as SSA, but almost always said as the full name when described out loud), the Air Force wants to track what objects are moving in the night sky, which objects are new, and what danger those objects might pose to satellites in orbit. When asked if the Air Force was working on space weapons to defend satellites, Armagno clarified that the Air Force is working on space defenses, and declined to explain further.

Attribution is one possible space defense that the SST brings to the military. With a working picture of objects in geosynchronous orbit, if something new shows up and, say, collides with a communications satellite, then SST could show how that object moved across the sky, and other tools could link it to the actor that launched it. “To be prepared for war is one of the most effectual means of preserving peace,” said Armagno, quoting George Washington’s first State of the Union address. 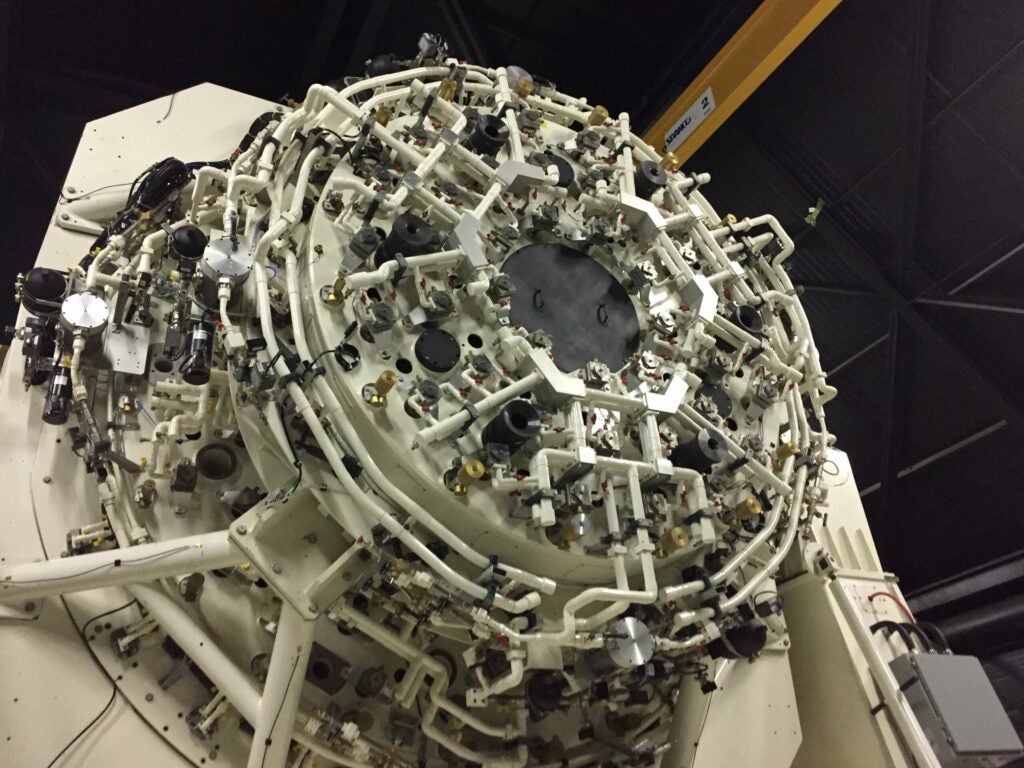 Back Of The Space Surveillance Telescope

It takes a fine pneumatic system to move the telescope, and one that can operate in freezing conditions, too.

At a total program cost of $150 million, the SST is roughly half again as expensive as a single F-35A, the Air Force’s newest stealth fighter. To cover all of geostationary orbit would take four such telescopes. Budget constraints, widely derided in casual conversation at the transition ceremony, mean that the first SST is now the only one, and the most immediate stage of its life is disassembly. The SST is going to Australia, where it will be Space Command’s eye on the southern skies. The need is the most urgent there; the Air Force has many tools that look at space, and only one of those is below the equator.

The SST’s next stage of life will begin on the beach at Australia’s Harold E. Holt naval base. Air Commodore Sally Pearson, with the Royal Australian Air Force, remarked at the transition ceremony that they’ll have to prepare the telescope for “cyclonic conditions,” a consideration it didn’t need when perched on top of an inland desert mountain.

Both Australian and United States Air Forces hope to have the telescope up and running in Australia by 2020. Once in place, it will stare into space, mapping and plotting objects, looking for danger. It will share some of this information with NASA and the larger scientific community, especially when those dangerous objects are asteroids, but it will remain a military tool, scanning for objects made by humans that threaten other objects made by humans placed in orbit around the planet that contains all humans.

The Space Surveillance Telescope won’t, by itself, be able to stop any of those threats. Instead, it will remain vigilant, making it hard for any country that puts a malicious object in orbit to deny that it is there. “No one wants a war in space,” Armagno told the assembled audience. On the off-chance that’s not true, the SST will be there to find out who, exactly, decided to start a war in the heavens. 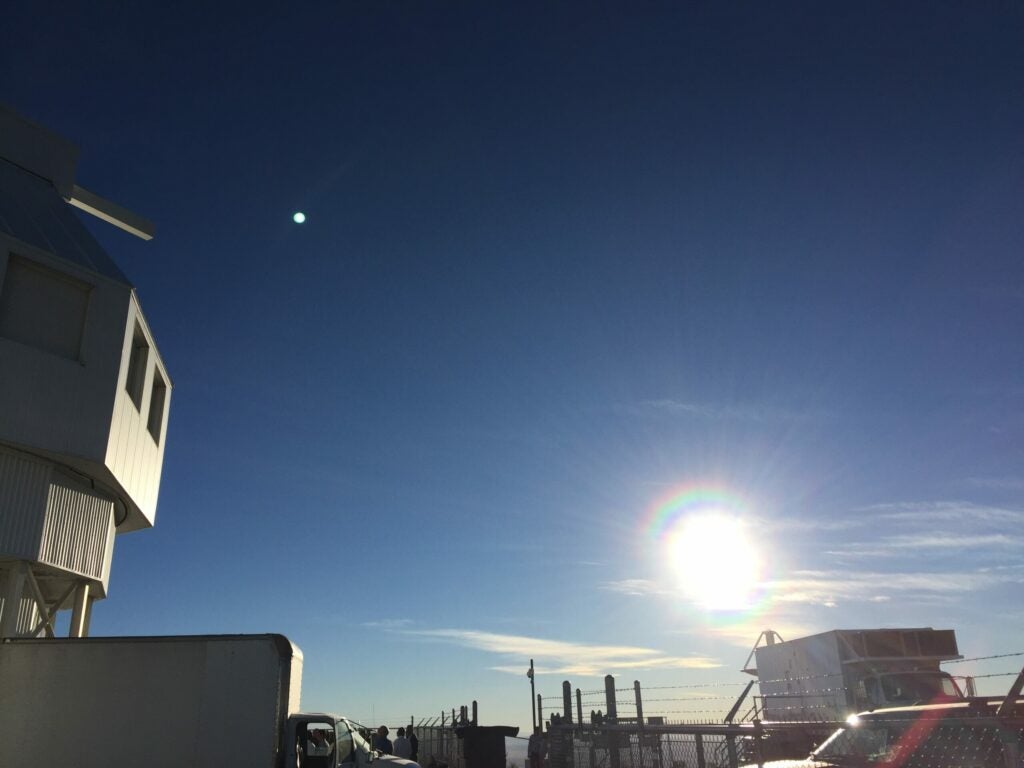 The Space Surveillance Telescope As The Sun Starts To Set

As the media left, the assembled engineers, program managers, and others involved in the project gathered for a dinner of green chile stew.
Kelsey D. Atherton