Deep Below South Dakota, a Mine Becomes a Physics Lab, and Miners Return to Work

For traditional mining culture as well as particle physics, it's a real scientific gold mine 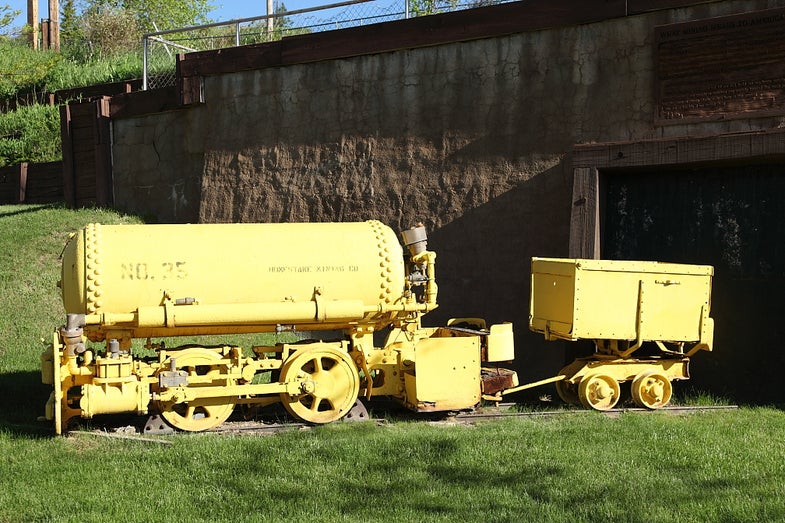 A group of former miners’ exhaustive knowledge of the Homestake Gold Mine will aid the search for cosmic particles like dark matter and neutrinos.

Homestake, with 370 miles of tunnels that plunge up to 8,000 feet underground, was once the largest and deepest gold mine in the western hemisphere. During its 126-year operation in Lead, South Dakota, a tiny Black Hills mountain town, the mine provided thousands with jobs and produced around $3.5 billion worth of gold. But in the late 1990s, gold prices dropped dramatically, and the mine started losing money — tens of millions of dollars a year. The mine was closed in 2003, by which time most of its employees had been laid off.

Several years of uncertainty about the future of the site followed, but in 2007, the National Science Foundation chose Homestake as the location for a proposed $875 million underground laboratory, the U.S.’s first national lab in over two decades. While the federal project is still pending final approval — and recent developments call its future into question — an effort by the state to use the site for science has already reemployed dozens of former miners and revitalized the local mining community.

Underground lab space is required for both astrophysics and particle physics because the thick layers of rock above help shield sensitive experiments from cosmic radiation and other background noise. Building such a lab from scratch is prohibitively expensive. Existing infrastructure—like a mine—is needed to make such a project feasible. Thus, within two weeks of the announcement that Homestake would close, a team of physicists started campaigning to convert the mine into an underground lab: the Deep Underground Science and Engineering Laboratory (DUSEL).

“Underground space is in short supply worldwide,” points out Kevin Lesko, DUSEL principle investigator. In 2000, Lesko helped organize a meeting on the need for a new underground lab. “Fortuitously, the announcement of the closure of Homestake happened around that time, and there was good agreement to make a lab out of it.”

Other notable North American underground labs that started out as mines include the Soudan Underground Laboratory, located in a former iron mine in northern Minnesota, and SNOLAB, which sits in the Creighton nickel mine outside of Sudbury, Canada. While both have impacted their surrounding economies and communities, neither share Homestake’s unique transition from mine to lab: the Soudan mine shut down 20 years prior to its conversion, and Creighton is still operational.

During its tenure in Lead, Homestake Mining Company not only employed generations of local residents, it essentially built the community, including the local health clinic, recreation center, bank and railway. Lead’s 2,800 residents were understandably supportive of the prospect of extending the mine’s life as a science lab, as were local and state politicians. Even before the NSF decision, the state had drummed up $157 million in funding to create the first stage of the larger complex (this state-funded lab, named the Sanford Laboratory after philanthropist T. Denny Sanford, who donated $70 million to the project, already has two tenants preparing to run experiments, a neutrinoless double-beta decay project and a dark matter detector. Both will reside in the famous Davis Cavern, which once housed the first detector to measure solar neutrinos.

Even with all of this support, the transition from mine to lab hasn’t been a simple matter of handing over the keys to the mine, and numerous hold-ups plagued the project in the years between closure and NSF selection. Because of the delays, many former miners who hoped to be a part of the science center had to look elsewhere for employment, from the local timber and construction industries to mining operations across state lines. “The longer the closure went, people started losing faith that something would happen,” explains Greg King, one of the lucky few whom were able to stay on throughout the closure by helping with the final ore processing and environmental clean-up. “But a lot of people had in their mind: someday we’ll be back here.”

Those people were eventually proved right. Finally, in 2006, the project was ready to start hiring. To date, the South Dakota Science and Technology Authority (SDSTA) has received over 3,400 applications to work at the lab – 2,000 of them before the hiring was announced — and today, 74 of the 122 employees are former Homestakers.

The group’s collective knowledge and experience at the mine have been instrumental in getting the site ready for science. King is a good example of this. A 30-year Homestake veteran, the 53-year-old started as a day laborer hauling rock in 1976 and worked his way to the top of multiple departments. He refers to the mine’s tunnels, shafts and winzes as easily as one might describe their own backyard. That knowledge paid off: today, King is the director of operations for the SDSTA/Sanford Lab and notes “everything that happens in the mine passes my desk.”

It’s not unusual for Homestake miners to span three, four or even five generations in Lead. King’s family, for example, has deep roots both the community and its mining culture. His sisters worked at Homestake’s tourist center, which includes the mine’s museum, and an uncle and two cousins were miners (one cousin died there in a mining accident). His parents owned one of Lead’s grocery stores from 1958 until 2000, and have operated the pastie shop, another local culinary institute, since 1975. Pasties are a miner’s meal, heavy meat-and-potato-filled pastries that resemble Italian calzones, brought to the U.S. by tin miners from Cornwall, England when they immigrated here the 1930s in search of work. The Kings’ pasties are popular throughout Lead, and the family even occasionally caters meetings at the Sanford Lab and SDSTA.

Other Homestake familial ties are less typical. Jim Hanhardt, 58, spent 15 years at Homestake before its closure, even helping maintain and eventually dismantle the famed Davis neutrino detector. He wanted to stay at Homestake as it became a lab. “I had watched this project and was interested in coming back for the science, but they weren’t ready yet when I needed a job.” So, after the mine closed, he traveled to southern California to help drill tunnel for a “treasure hunt”, a search for a lost underground river of gold (no joke) then spent five years at the Stillwater platinum and palladium mine near Nye, Montana, before returning to Lead.

Jim’s son, Mark Hanhardt, 29, was drawn to Homestake for another reason: astrophysics. Mark, a second-year graduate student in physics at the South Dakota School of Mines and Technology, turned down several other grad school offers because the draw of DUSEL was far too strong. Today, he is helping build photomultipliers for the Large Underground Xenon Experiment, a dark matter detector to be built in the Davis cavern. He hopes to eventually return to his “true love”, neutrinoless beta decay, experiments for which are also planned for DUSEL.

Whatever the draw, the promise of DUSEL is keeping local miners and mining traditions alive.

“I was really sad that the mine had to close,” says Bonnie King, the pastie baker, “But I know things have to change. I’m really happy that there is something going on here—it is good for the community to have this to look forward to and it gives the whole town hope that it will build the economy in the area.” 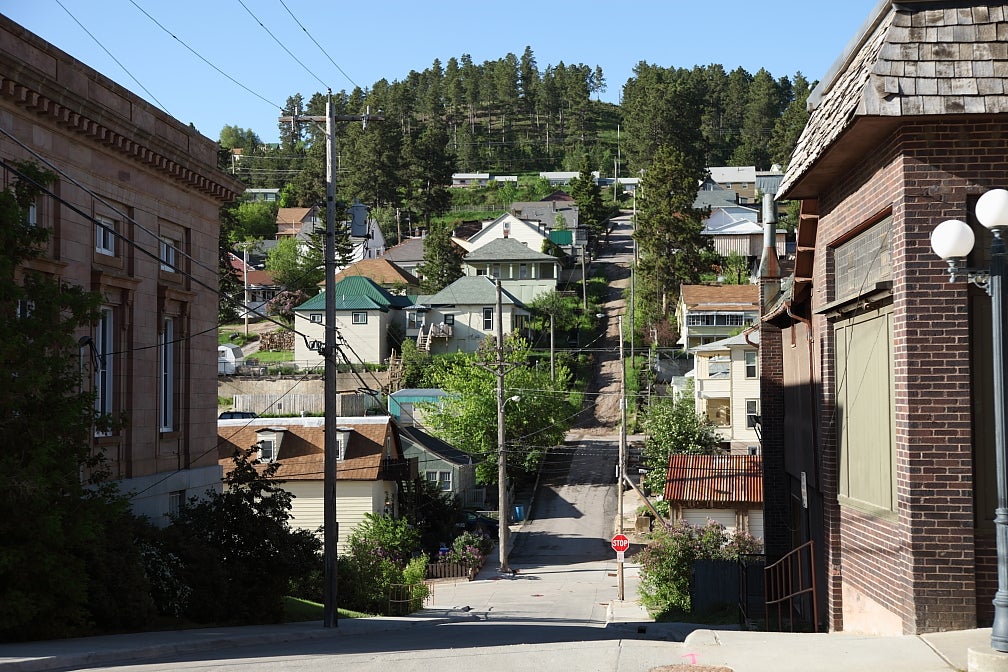 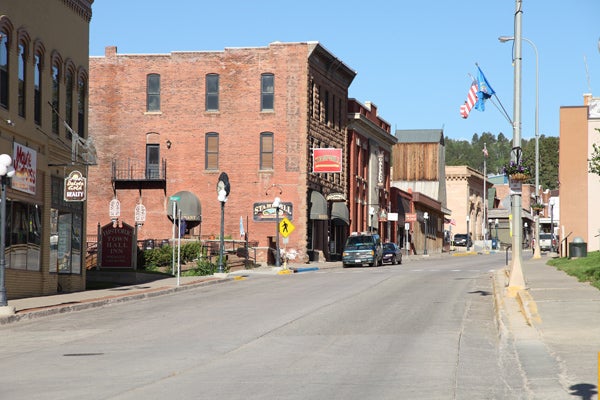 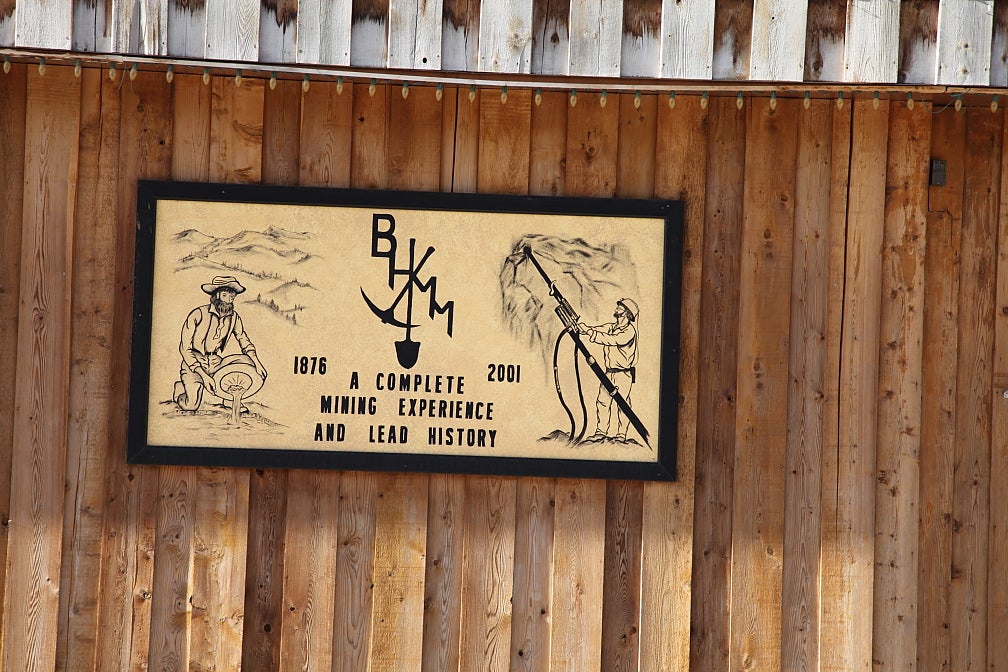 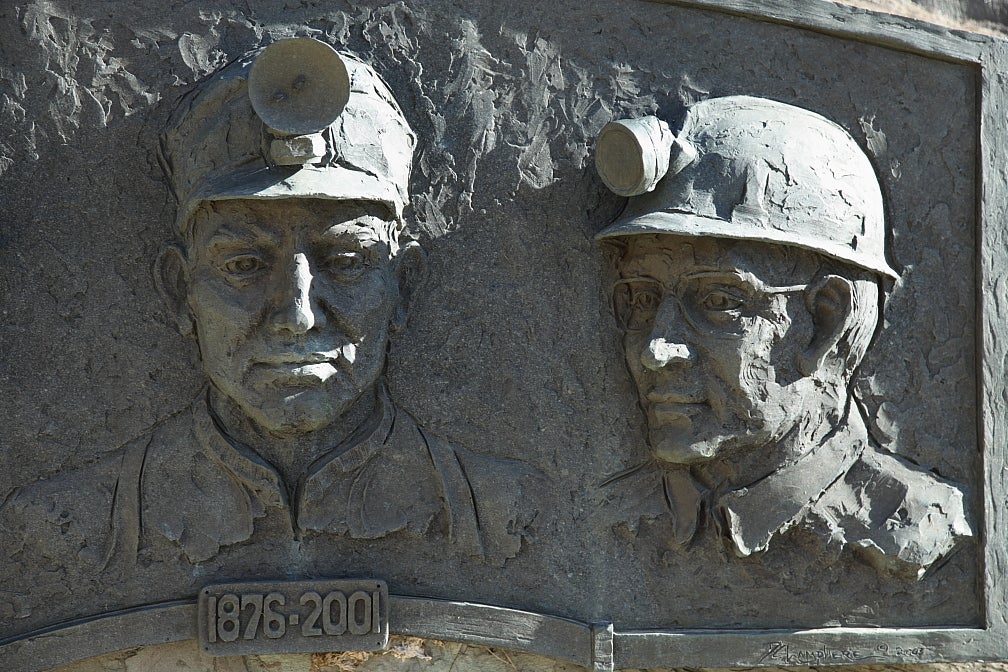 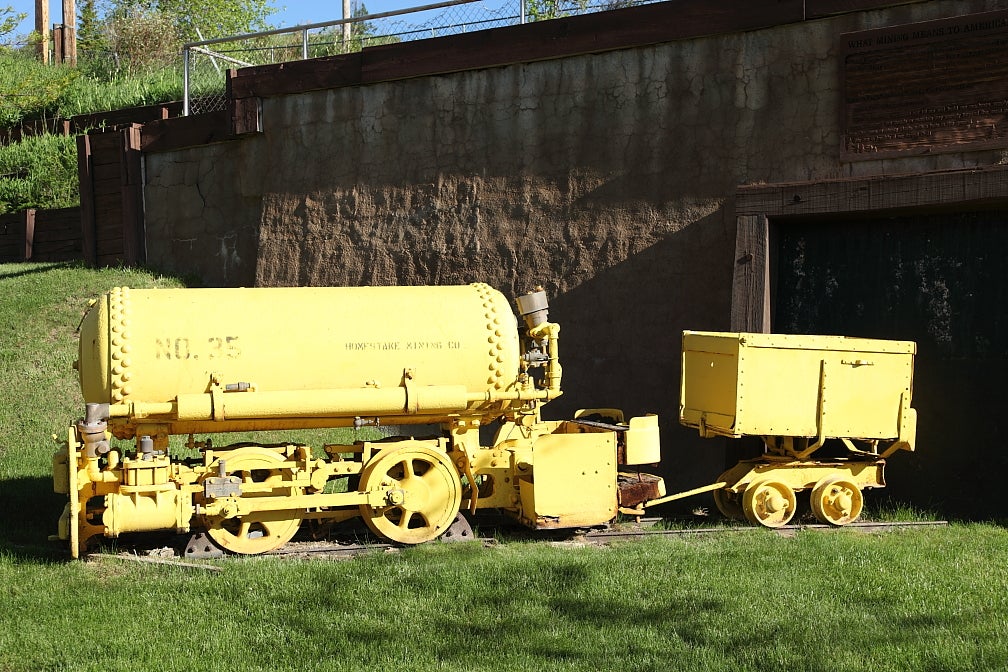 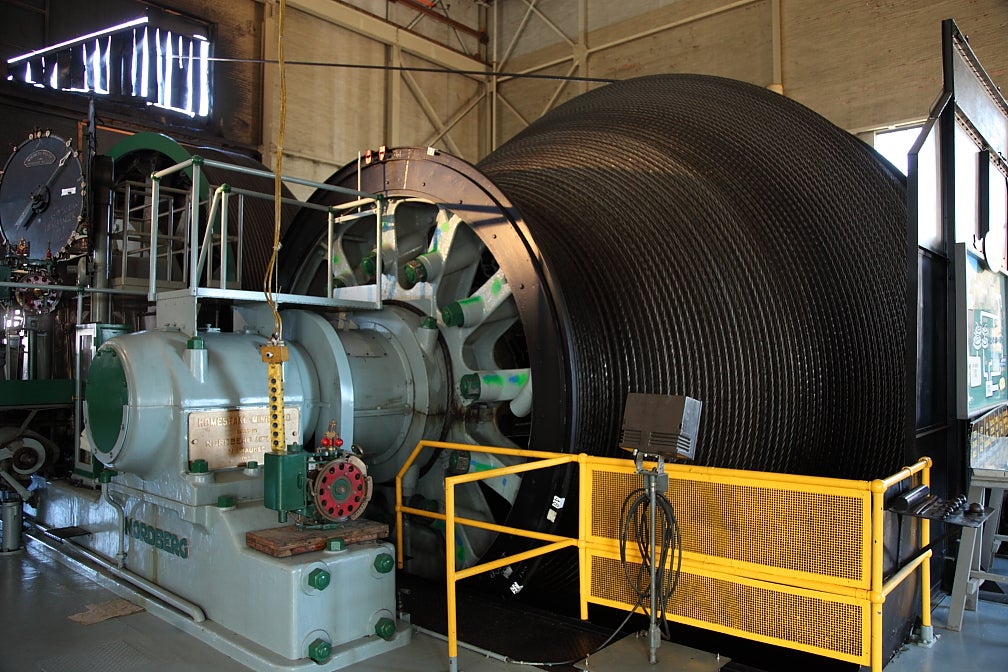 The cable head in the hoist room is responsible for raising and lowering the caged elevators that bring people and supplies into the mine. 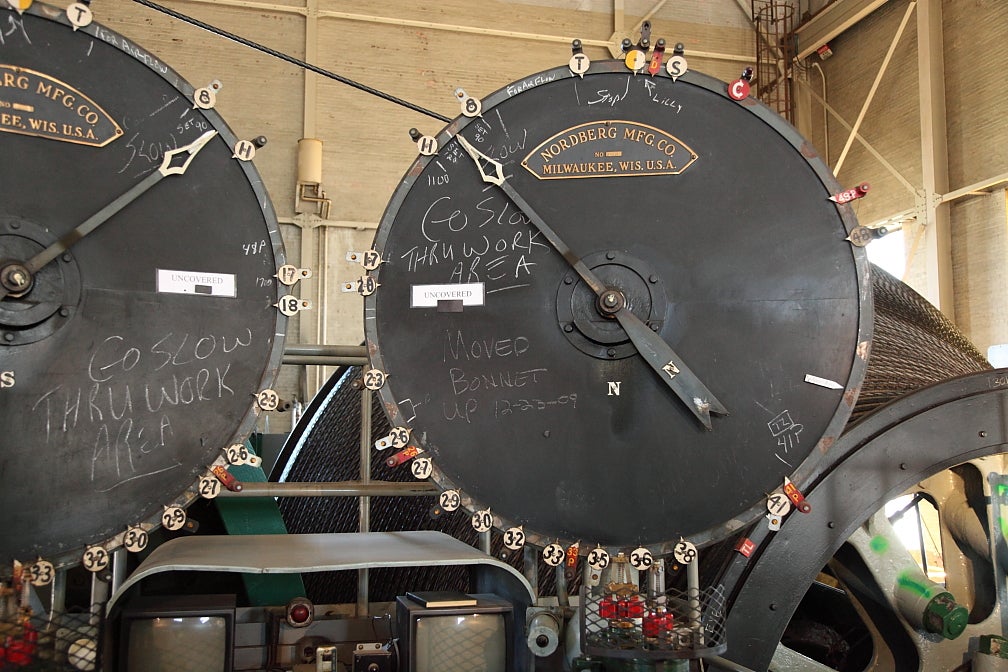 These dials, dating to the 1930s, show the depth of the caged elevators as they move up and down the mineshafts. 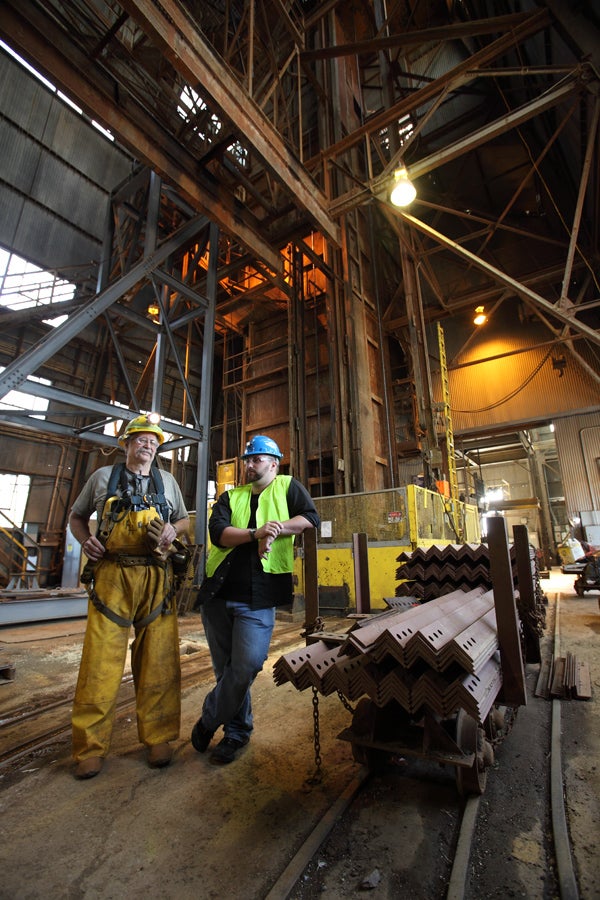 Jim Hanhardt, a former Homestake miner, and his physicist son Mark stand in the building that houses the mine’s Yates Shaft, which leads to the Davis Cavern 4,850 below. A mural in Lead celebrating the Homestake Mine’s scientific future. 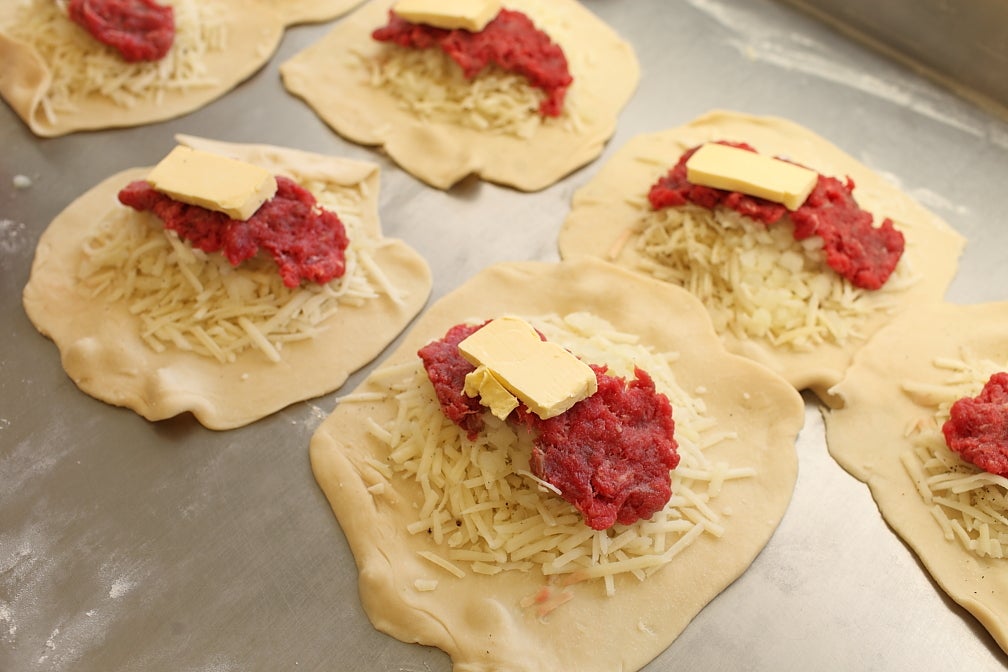 A batch of pasties mid-assembly. Their ground beef, onion and butter fillings are exposed. 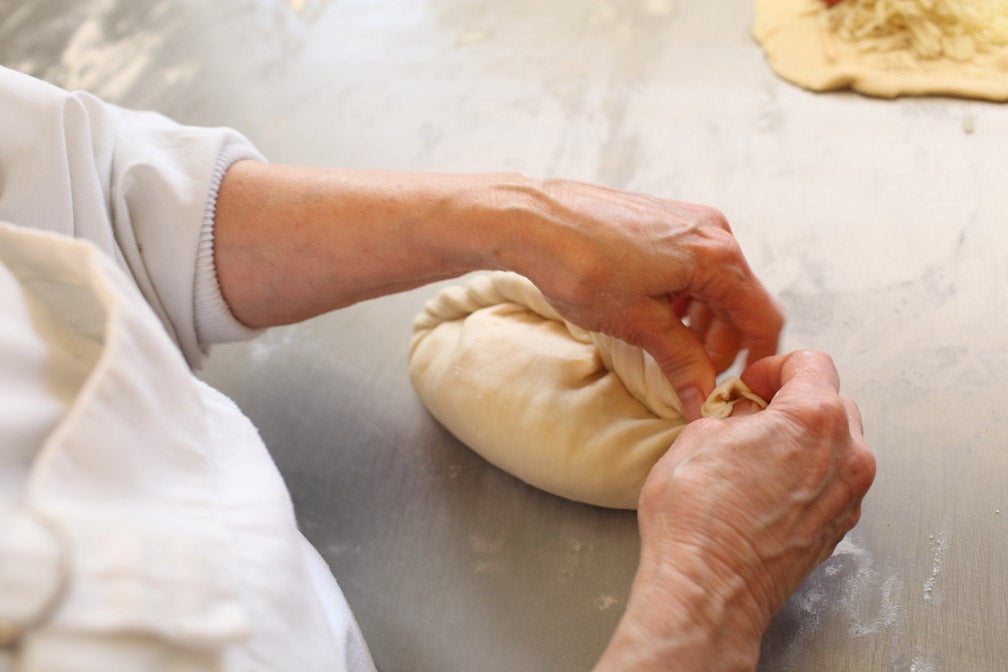 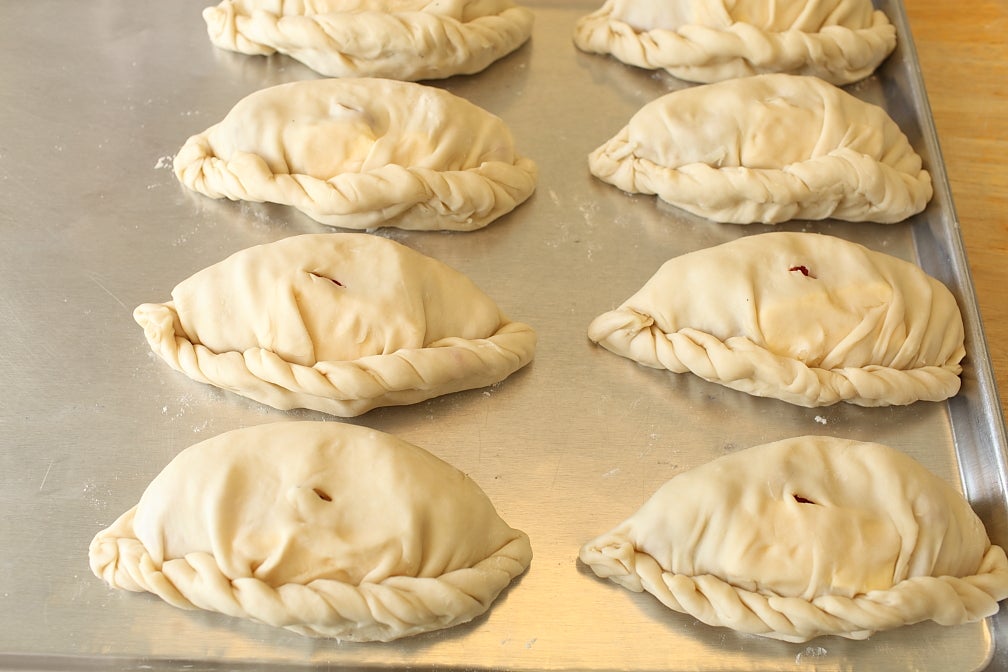 Ready For the Oven 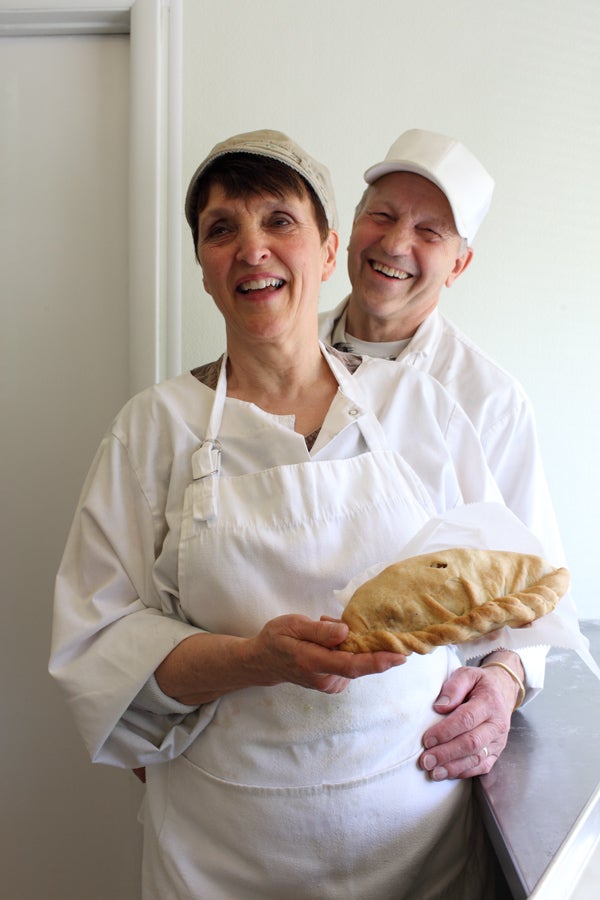