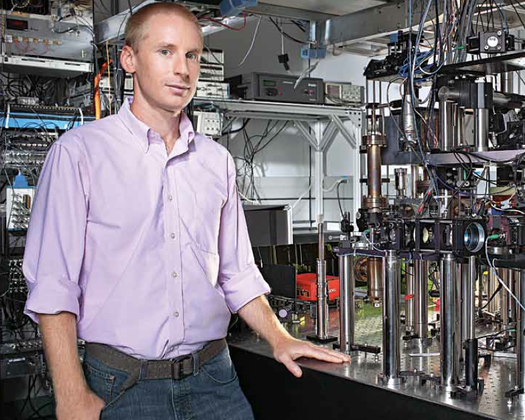 This year’s Brilliant 10 honorees join the illustrious ranks of Marie Curie, Werner Heisenberg, Francis Crick and James Watson in proving that youth isn’t always wasted on the young. Whether by virtue of their fresh perspective, their youthful energy or the simple desire every kid has to mess with stuff, these researchers have always been the sort of minds that improve our world. After all, they’ll inherit it. Check out the rest of the Brilliant 10 honorees here.

Outside his lab at the Maryland campus of the National Institute of Standards and Technology, physicist Ian Spielman is enthusiastically talking about his recently published breakthrough in atomic physics. I’m trying to keep up. His research solved a decade-old problem that had stumped the best minds in the field. He explains to me that through the creative use of radio-frequency radiation and laser light, he made neutral atoms move as if they held an electric charge, manipulated by a magnetic field that didn’t actually exist. I nod, mouth slightly ajar. What?

Basically, Spielman builds model systems that simulate real phenomena. In this case, physicists want to make high-temperature superconductors or quantum computers but don’t understand the physics involved. Spielman creates the tools to figure it out using a state of matter called a Bose-Einstein condensate—groups of ultra-cold rubidium atoms that have condensed until most of them exhibit the same quantum properties—and then controls the atoms’ behavior precisely using electromagnetic radiation and lasers. Being able to control the atoms helps reveal the physics. Here, Spielman may have brought us closer to harnessing a poorly understood entity—a non-Abelian anyon—that would make what’s known as a topological quantum computer possible. Among physicists, the guy’s a hero.

As a teenager in New Mexico, Spielman considered becoming a fighter pilot but instead followed his father into physics. Jet-jockey ambitions might seem out of place for a button-down guy who studied physics and math at the University of Oklahoma, graduated from college and married his girlfriend on the same day, and moved to Pasadena to pursue a doctorate in condensed-matter physics. But when Spielman discusses his work, it is apparent that he has a rich vein of inner crazy, hammering at physics problems in a berserk, merciless way until his lab gives up good data. “Ian accomplished twice as much as any other student could in the same amount of time,” says Jim Eisenstein, Spielman’s former Ph.d. adviser at the California Institute of Technology.

Outside the lab, Spielman restricts the crazy to dinner. “I buy ingredients I’ve never heard of,” he says. “We just got this sort of red celery—rhubarb, I now know. I made a punch out of it.”