As if the idea ideas of quantum entanglement and time travel weren’t difficult enough to wrap one’s head around separately,... 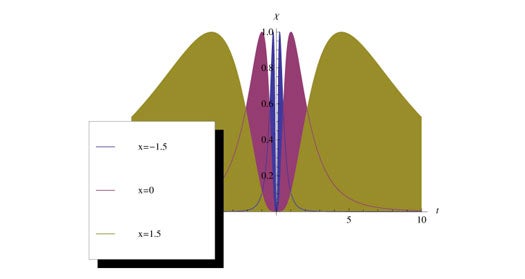 As if the idea ideas of quantum entanglement and time travel weren’t difficult enough to wrap one’s head around separately, two physicists at the Universtiy of Queensland in Australia have further compounded the headache by merging the two ideas via a new kind of quantum entanglement that links particles not across space, but across time.

Quantum entanglement is that “spooky action” (Einstein’s words, not ours) that links two particles such that a measurement on one immediately influences the state of the other, even if the two particles are separated by miles, or even light years. Entanglement defies the intuitive way we understand the universe to work (as does most of quantum mechanics). The idea of “time teleportation,” as described by S. Jay Olson and Timothy Ralph, doesn’t add clarity but it does introduce some interesting questions about the fundamentals of the universe.

In a sense, everyone and everything is time traveling, moving forward in time at a given rate. What Olson and Ralph propose is that it’s possible to take a shortcut into the future without being present in the interim. How? Tech Review’s KFC explains:

The idea is that a detector acts on a qubit and then generates a classical message describing how this particle can be detected. Then, at some point in the future, another detector at the same position in space, receives this message and carries out the required measurement, thereby reconstructing the qubit.

But here’s the thing: said qubit doesn’t have to exist in the time between it’s initial detection and its reconstruction, though it is the exact same qubit. But there is a wrinkle, in that the initial creation of the qubit and its detection in the future must be symmetrical. “If the past detector was active at a quarter to 12:00, then the future detector must wait to become active at precisely a quarter past 12:00 in order to achieve entanglement,” they say in their paper.

How does all this work? Admittedly, we’re not sure. But researchers have already achieved teleportation across space in the lab, so if time teleportation is truly as simple as space teleportation, we’ll likely be shown how it works sometime soon enough.