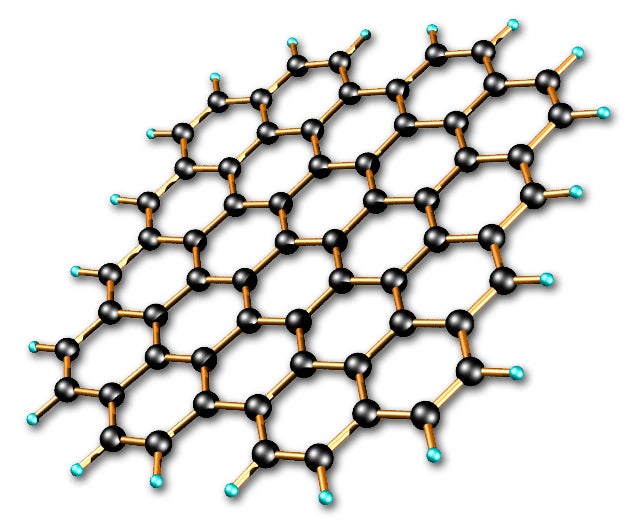 One of the most promising materials in science could answer some questions about one of the most elusive particles in the universe, according to a new paper. A trio of Spanish physicists believes that graphene, that simple, special Nobel-winning stuff, could provide some key insights into the behavior of the Higgs boson.

When you compress graphene, a one-atom-thick sheet of carbon, it ripples. This is related to the graphene’s energy potentials. Spontaneous symmetry breaking — fluctuations that dictate what happens next — cause the ripple effect.

Pablo San-Jose, Francisco Guinea, and Jose Gonzalez at Madrid’s Institute for Material Science say this is analagous to the symmetry breaking that happened in a blink after the Big Bang.

In the universe’s earliest birth pangs, all four fundamental forces were one, and all was symmetrical with the world. But this hot, dense state was unstable, and as soon as things cooled off, the four forces broke apart into gravity, electromagnetism and the weak and strong nuclear forces.

As Discovery News puts it, this phenomenon is more properly described as the Higgs field (which is associated with the Higgs boson) shifting from a high-energy state to a grounded state. Physics World describes the so-called sombrero effect, or “Mexican hat potentials,” in more detail here.

Basically, when graphene responds to being stretched or compressed, the result is similar to what happens when the Higgs field condenses, breaking the symmetry of the universe.

San-Jose says studying the ripple effect of graphene could give hints about the Higgs field and the Higgs boson, which gets its mass from vibrations in the Higgs field. In addition to rippling under pressure, physicists also know that small, spontaneous ripples form in graphene in temperature fluctuations and even without compression.

Now, this does not mean the humble graphene crystal will beat the Large Hadron Collider to a Higgs boson discovery — but it could help physicists work out some of the weird math associated with quantum field theory. That is, if it’s even correct. Discovery News talked to one physicist who said the graphene model might not be an accurate representation of how the Higgs field actually works. Still, it’s pretty cool — the strongest, thinnest material ever discovered, arguably one of the most important materials in all of science, might help us understand the mechanisms behind the formation of the universe.