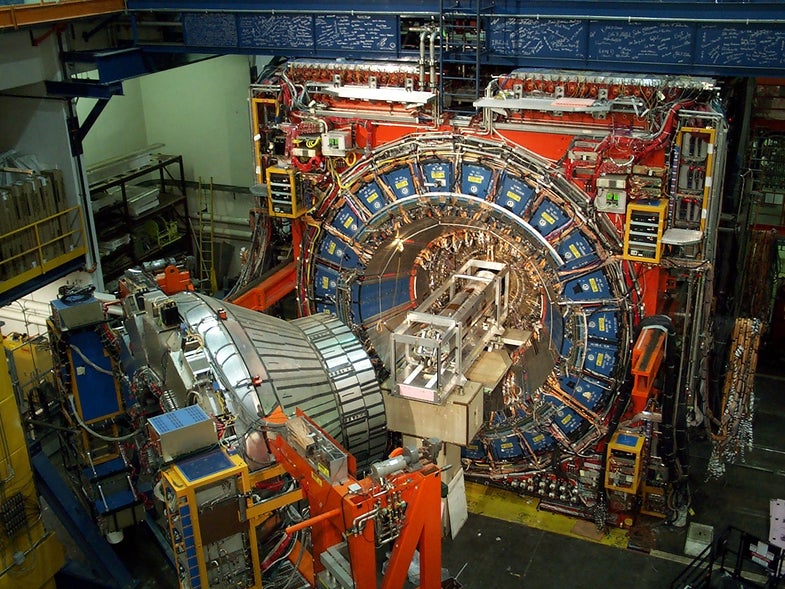 Physicists at Fermilab might have found evidence of a new elementary particle or an entirely new force of nature, suggesting the nation’s biggest science experiment is about to go out with a bang.

A new analysis of 10,000 proton-antiproton collisions at the Tevatron showed a weird result a couple hundred times — the numbers do not agree with the accepted theories of elementary particles and the forces that govern them. Post-collision jets of electrons and heavy particles called W bosons did not behave as they should.

The New York Times’ Dennis Overbye explains: “In about 250 times more cases than expected, the total energy of the jets clustered around a value of about 144 billion electron volts, as if they were the decay products of a hitherto unsuspected particle with that mass-energy.”

There are actually a few anomalies in the data, including asymmetrical behavior of top quarks. Together the data suggest a new particle, a new force or at the very least, new behavior among recognized particles and forces. This new particle could be a new boson, though not the elusive Higgs (the Higgs decays into heavier particles than this new thing does). One theory posted to the physics arXiv says it could be a new brand of Z boson. Another theory posits that it’s a heavy version of a gluon, the particle that glues quarks together, reports Science News.

Whatever it is has physicists pretty excited. Fermilab theorist Christopher Hill, who was not part of the team, told the New York Times: “If it is real, it would be the most significant discovery in physics in half a century.”

Last fall, Fermilab physicists said they detected evidence for a new class of neutrino, a “sterile” particle that only interacts through gravity. Those results came out of the MiniBooNE detector; this is is the result of a different experiment, Tevatron’s CDF experiment.

The team posted their results to the physics arXiv online and submitted the results to the journal Physical Review Letters. As the Times points out, verifying these results would be an impressive finale for the Tevatron, which will shut down later this year when it runs out of money.

But that leaves even more juicy targets for the Large Hadron Collider.