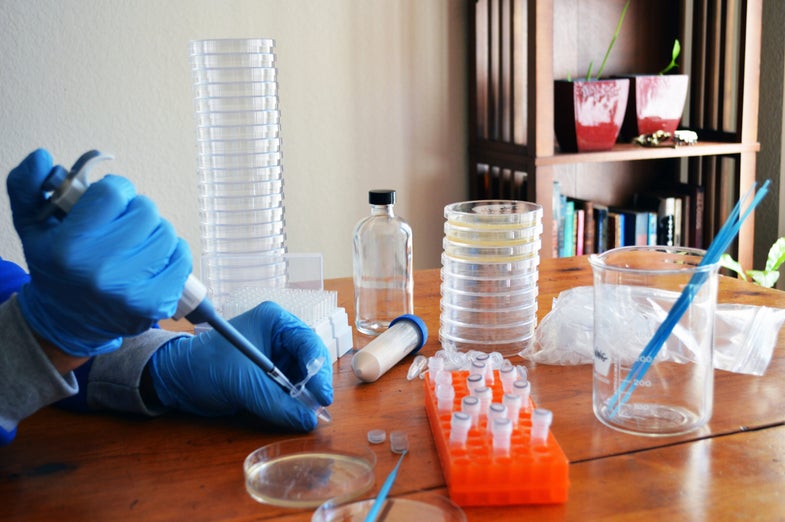 Growing up poor on a farm in Indiana, Josiah Zayner often felt like his dreams were out of reach. His family couldn’t afford to support his interest in computers, so he got a job at the local grocery store and saved money to buy his own modem. Being able to cultivate his passion for computers changed his life.

“I became inspired to do stuff like engineering and science, and was eventually able to go to graduate school,” says Zayner, a synthetic biologist who received his PhD in biochemistry at the University of Chicago and now runs his own biohacking supply company, called the Open Discovery Institute (ODIN).

Last fall, Zayner ran a crowdfunding campaign on Indiegogo to supply do-it-yourself CRISPR kits to home hobbyists. Described as a “search and replace” tool for DNA, CRISPR is a precise and versatile gene editing technique that has opened the door for rapid advances in bioengineering. The technology prompted scientists to gather for a global summit to debate its implications in December.

In the excitement, Zayner raised more than $69,000, nearly seven times his original crowdfunding goal. He left his job researching bacteria intended for Mars terraforming at NASA to run the ODIN full-time.

Zayner’s efforts have been controversial. Though his CRISPR kits only provide supplies to perform very basic experiments, experts worry that Zayner’s kits could pave the way for more dangerous applications such as developing new pathogens. Others are concerned that people performing biology experiments at home might not properly observe lab safety protocols.

Zayner’s kits could serve as educational tools, says Todd Kuiken, a senior program associate at the Woodrow Wilson Center, a public policy think tank based in Washington, DC. But Kuiken takes issue with the way Zayner advertised the kits, which included a video shot of petri dishes stored next to food in a refrigerator. It “presented a disregard toward basic biosafety protocols,” Kuiken says. He believes the best way to address both biosecurity and biosafety concerns is for the DIY Biology (DIYbio) community to build on its own established codes of conduct.

Zayner, however, is not entirely interested in operating within the already established DIYbio community, which he believes can be hierarchical and exclusive. The expectation that he should have the money and space for a dedicated fridge is classist, he says. “Who gets to determine what is safe?” he asks. “If you’ve been to a biohacker space, you’d know that it’s mostly white, upper-middle class people.”

“I want literally anybody to be able to do science—not just people who can afford a $100-a-month lab fee, or three fridges in a dedicated lab room in a 2,000 square-foot house,” he says.

The issue of basic safety is separate from class and racial considerations, says Tom Burkett, founder of BUGGS, a DIYbio lab in Baltimore. “It’s not white, middle-class people who are deciding what is or is not safe, it’s a larger community composed of biosafety experts,” he says. “Zayner is doing the DIYbio community a disservice by being cavalier about his safety practices. Not only could his example possibly get someone hurt, but it could also bring about increased regulation which would limit access to the technology.”

For his part, Zayner says the bacteria (E. coli K-12) and yeast (S. cerevisiae) he uses are considered safe and exempt from the guidelines of the National Institute of Health, which issues rules for the labs that it funds. To him, these guidelines suggest that he should not need another fridge to separately contain his specimens.

“Do we want to say that this kind of science should only ever be done in a formal laboratory setting?” he asks. “Or do we truly want to enable kids to do science at home?” If it’s the latter, then people will have to accept the fact that some experiments will happen in the kitchen, and it should be up to the makers of kits to make their experiments as safe as possible, says D’haeseleer.

However, D’haeseleer also thinks it’s possible to make DIYbio labs, such as Counter Culture Labs and BioCurious in Silicon Valley, diverse spaces. “In my personal experience, BioCurious and Counter Culture Labs are lab communities where I’ve seen the widest cross-section of society by far, in terms of age, gender, educational background, financial ability—you name it,” says D’haeseleer. “We try to keep our classes as free or low-cost as possible. We also have a sponsored membership application program where people can state however much they can afford to pay for membership.”

Whether it’s done at home or in a formal community lab, DIYbio is inherently a privileged activity, says Alondra Nelson, a professor of sociology at Columbia University. “On both sides it requires not only disposable income, but also leisure time to ponder and tinker.”

“In a world where, increasingly, working class people can’t get by on just one full-time job, hobbyist experimentation and biohacking are very much an upper-middle class exploit,” she says.

Discussions of DIY CRISPR point to larger questions of access, says Nelson, such as whether marginalized communities will have access to future health benefits made possible by the technique. “These are issues in which race and class are very much at the center,” she says.

Ultimately, Zayner believes that making a futuristic-sounding technology like CRISPR accessible could bring people closer to science. He himself feels frustrated when he hears about advanced technologies, such as invisibility cloaks or quantum computers, that seem hopelessly out of reach. When he learned how simple CRISPR was, he realized that it was the perfect opportunity to introduce a groundbreaking technology to more people.

Zayner’s CRISPR kits cost $140 for engineering antibiotic-resistant bacteria to survive on media they wouldn’t typically survive on, or $160 for engineering yeast to turn red as they grow. He sees his customers as people who want to explore science on their own, just as he taught himself to code in his parents’ house. “For me, it’s all about ‘how do we give those geniuses who are sitting in their moms’ basements access, so they can do brilliant things?'”