In Midst of Budget Woes, NASA Contemplates a Manned Waypoint In Orbit Near the Moon

The NASA budget that went to Capitol Hill yesterday dashed any plans to initiate new Mars exploration missions in the... 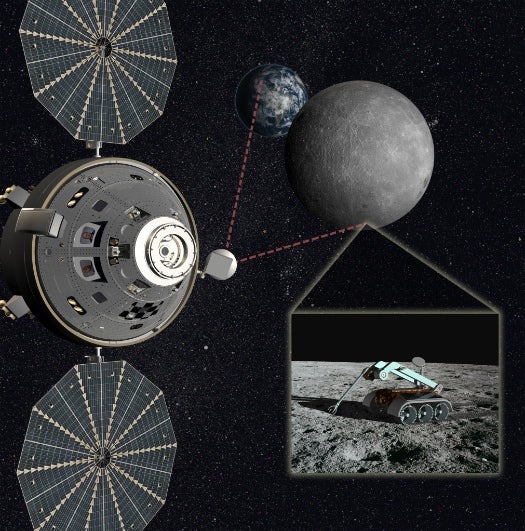 The NASA budget that went to Capitol Hill yesterday dashed any plans to initiate new Mars exploration missions in the next few years, but amid the belt-tightening SPACE reports that NASA is exploring another idea that, while much closer to home, is still quite ambitious–the building of a manned waypoint (read: space station) at the Lagrangian point EML-2 on the far side of the moon. This international space station (but we’ll have to think of a better name) would serve as a jumping off place for new science missions as well as a gateway to other destinations like asteroids, Martian moons, and–eventually–Mars.

NASA, its Mars ambitions on hold for now, is viewing such a waypoint as a near-term exploration asset with the capacity to deliver new science and technologies within the decade. It would incorporate NASA’s core next-gen capabilities–the planned heavy lift rocket known as the Space Launch System (SLS) and the Orion Multi-Purpose Crew Vehicle–as well as technologies contributed by international partners.

And in the near-term, it could put humans further out into space than they’ve ever been–the kind of superlative mission the agency as lacked since the glory days of the Apollo Program.

From EML-2, on the lunar far side, humans aboard a station could direct telerobotics on the side of our satellite that has been rarely studied (new lunar science!) while also conducting research into long-term deep space habitaiton (new human spaceflight science!) while giving NASA’s next-generation manned space vehicles a destination (a new place to go!).

The idea, of course, being to build on the station. Start with some lunar science and some new deep space science enabled by being in the “quiet zone” on the far side of the moon. And after learning a bit about the effects of habitation so far out in space, use the waypoint as both a technology test bed and eventual enabler for exploration further and further into space.

Of course, this all sounds really, really expensive. Which brings us back to NASA’s core problem this morning–a lack of funds for big flagship projects. We’re ducking out on commitments to the ESA and cutting costs elsewhere this week. But talk is cheap enough. A group of ISS partners is meeting in Paris this week and will likely talk through the idea. The study is due back to NASA by March 30.