‘Clown Gun’ For Police Slows Down A Single Bullet 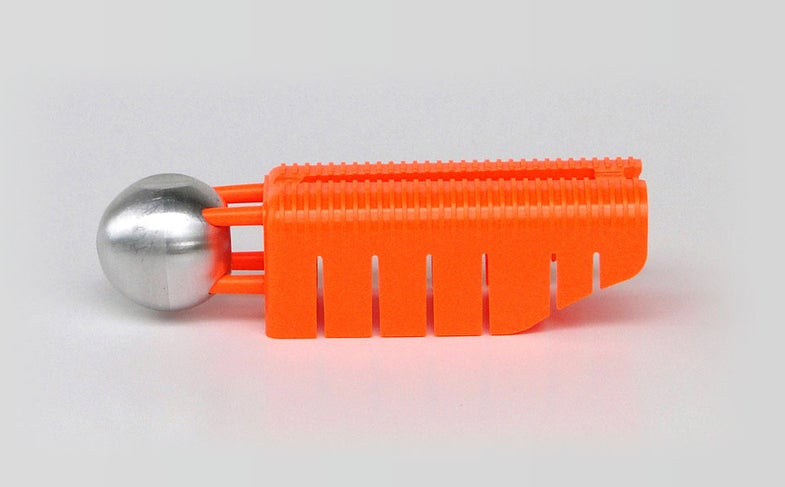 Bullets in motion tend to remain in motion for far longer than anyone wants. While most accurate shooting with handguns takes place at distances of around six feet, pistol bullets can travel up to 1,000 feet after they’re fired. Made by Alternative Ballistics, “The Alternative” is a pistol accessory aimed at law enforcement that promises to slow the first bullet fired by 50 percent, protecting bystanders and offering a less lethal, well, alternative.

Each “Alternative” is a single-use bullet modifier, carried in a belt pouch where it can be taken out and attached to a pistol one-handed. Once on the gun, the next bullet fired will move into an open pore on a metal sphere. The bullet’s momentum will carry the sphere forward, still delivering a lot of force, but a lot less penetration than an unencumbered round. A ballistic gel test, which bullets usually sink into, showed it only going in a couple inches. Bad, but probably not rupturing multiple organs bad.

Alternative Ballistics claims it slows the bullet to 1/5th normal speed. After that shot, the officer’s gun is back to normal, ready to deal bullets with a standard degree of deadliness.

Neat as it is, it’s unlikely to find much usage in quick-draw situations, where an officer probably doesn’t want to take a second to add a slower bullet onto their gun. It may still find real application in stand-offs or more drawn-out scenarios, where a cop having the option to shoot a less-lethal bullet is better than just having to choose between shooting or not shooting.

Alternative Ballistics bills it as a weapon for situations where there’s a risk of lethal force but the subject doesn’t have a gun. The Alternative may be a way to bring a gun to a knife fight, but it at least puts a handicap on the gun.