And that can be carried on a plane without the hassle, too 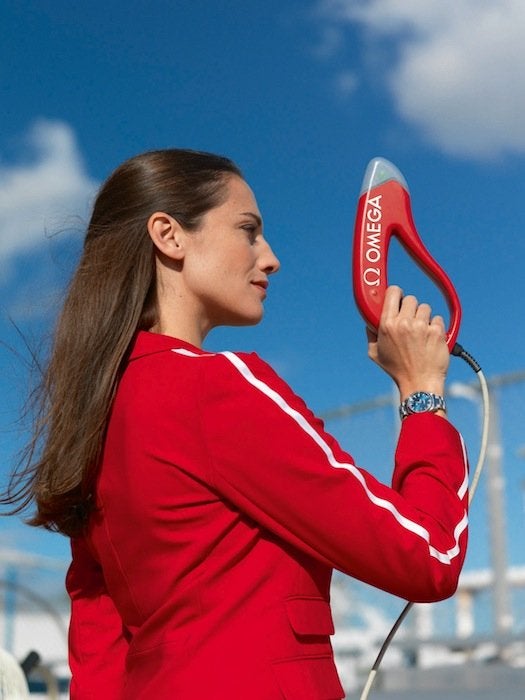 It’s easy to take for granted just how insanely close some Olympic races are, and how much the minutiae of it all can matter. The perfect example is the traditional starting gun. Seems easy. You pull a trigger and the race starts. Boom. What people don’t consider: When a conventional gun goes off, the sound travels to the ears of the closest runner a fraction of a second sooner than the others. That’s just enough to matter, and why the latest starting pistol has traded in the mechanical boom for orchestrated, electronic noise.

Omega has been the watch company tasked as the official timekeeper of the Olympic Games since 1932. At the 2010 Vancouver games, they debuted their new starting gun, which is a far cry from the iconic revolvers associated with early games–it’s clearly electronic, but still more than a button that’s pressed to get the show rolling. About as far away as you can get, probably, while still clearly being a starting gun. Pull the trigger once, and off the Olympians go. If it’s pressed twice consecutively, it signals a false start.

Working through a speaker system is what eliminates any kind of advantage for athletes. It’s not a big advantage being close to a gun, but the sound of the bullet traveling one meter every three milliseconds could contribute to a win. Powder pistols have been connected to a speaker system before, but even then, runners could react to the sound of the real pistol firing, rather than wait for the speaker sounds to reach them. This year’s setup will have speakers placed equidistant from runners, forcing the sound to reach each competitor at exactly the same time. “It wouldn’t be an enormous difference,” Omega Timing board member Peter Hürzeler said in an email, “but when you think about reaction times being measured in tiny fractions of a second, placing a speaker behind each lane has eliminated any sort of advantage for any athlete. They all hear the start commands and signal at exactly the same moment.”

There’s also an ulterior reason for its look. In a post-September 11th world, a gun on its way to a major event is going to raise more than a few TSA eyebrows, even if it’s a realistic-looking fake. Rather than deal with that, the e-gun can be transported while still maintaining the general look of a starting gun.

But there’s still nothing like hearing a starting gun go off at the start of a race–more than signaling the runners, there’s probably some Pavlovian response after more than a century of Olympic games that make people want to hear the real thing, not a whiny electronic noise. Everyone in the stands at home, thankfully, will still be getting that. “The sound is programmable and can be synthesized to sound like almost anything,” Hürzeler says, “but we program it to sound like a pistol–it’s a way to use the best possible starting technology but to keep a rich tradition alive.”