Attention recruits. Those of you landing in Afghanistan in coming months may not have to engage in the sandbag stacking... 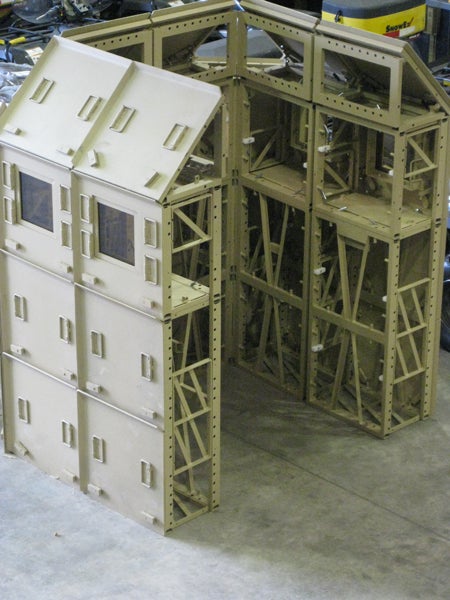 Attention recruits. Those of you landing in Afghanistan in coming months may not have to engage in the sandbag stacking and trench digging usually associated with lowly grunt-dom. An $800,000 investment in an armored wall system known as McCurdy’s Armor could have Marines rapidly erecting 6.5-foot-tall mortar-, RPG- and bullet proof fortresses in less than an hour, saving the days it can take to fortify an area by conventional means and making forward-operating units more nimble.

Named for Ryan S. McCurdy—a Marine killed in Iraq in 2006 while hauling a wounded comrade to safety—the system is designed to offer troops increased protection and mobility when setting up outposts in hostile areas. The walls can be ferried into place in panels that are easily stackable in a truck or trailer. Once in position, four Marines can assemble a single panel in less than ten minutes without any special tools or additional equipment. The panels then snap together like bomb-proofed Legos secured with steel pins to form a blast- and bullet-proof shelter.

The armor can be set up in a variety of arrangements (U-shaped, J-shaped, etc.), and in instances where troops are worried about armor piercing rounds a second layer of armor can supplement the structures. But the walls aren’t just a protective cocoon for far-flung outposts; ballistic windows offer protection while giving Marines a line of sight and the ability to fire downrange, meaning McCurdy’s Armor can be deployed as both a defensive stronghold as well as a tactical firing position.

When it’s time to pull up camp, Marines can quickly break down their ersatz stockade, stack it back in their vehicles and move on to fortify the next position without leaving a single thing behind. Just try pulling that off with sandbags.