For God’s Sake, Stay Inside During A Gun Fight

Bullets work way differently in real life than they do in movies. 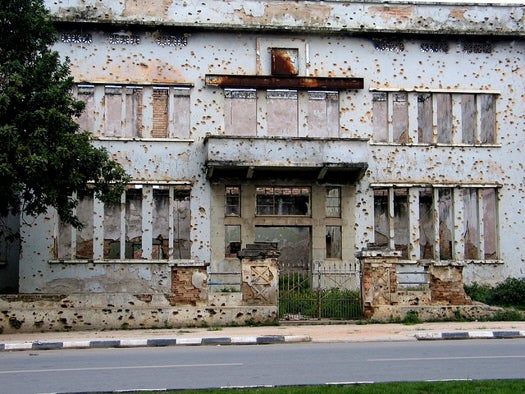 Ever wonder why the people taking cell phone videos of gunfights aren’t themselves hit by bullets? Turns out, there’s no good explanation other than dumb luck, because according to the laws of physics, they should be totally screwed.

During the manhunt for the Boston Marathon Bombers last week, a bunch of people posted videos online of the firefights, often shot from where they stood, with smartphone cameras. Writing in Esquire, Lt. Col. Robert Bateman was incensed by the life-threatening idiocy of these amateur civilian reporters and speculated that only a poor understanding of science could explain this:

Power, with guns, is dictated by physics. As my father the physicist taught me at way too early of an age, F = M x A. Force = Mass x Acceleration. The striking, or penetrating, power of the bullet is determined by how heavy (mass) it is, multiplied by how fast it is moving. Thus, a small bullet, moving at extreme speeds, can cause a lot of damage. A large bullet can move at much slower speeds, and cause the same damage. All other things being equal, however, the higher the speed, the greater the penetration. Now, that word “penetration” is one you should think about.

And here’s just how powerful bullets are:

In the real world, I have converted a sedan into a convertible, quite easily, using bullets. Not even a lot of bullets either. If the other guy is firing anything with greater hitting power than, say, a .32 (Google .32 caliber, .45 caliber, 5.56mm and 7.62mm…I can’t do it ALL for you) it will go through things. Metals, woods, sheet-rock? No problem. Your front door will not protect you, at all. Nor will the walls of a normal suburban house, nor the three Sheet-rock walls beyond that. In a car, the only thing that really stops most bullets would be the engine block itself. All the rest of the body of a car, well, basically tin-foil. All those cop movies you remember from the 70s, when they hid behind the opened door of their patrol car and shot at the bad guy? Yea, no. Do not think that works. That is stupid, and nobody but actors in Hollywood actually does that.

To expand on what Bateman sets out, even trained marksmen miss their targets more than Hollywood would have you believe. In an FBI report describing New York Police Department gun use from 1994 to 2000, only shots fired within 6 feet of the target hit with greater than 20 percent accuracy. (Shots fired within 6 feet, by contrast, were accurate percent of the time.) Another NYPD report describing shots fired in 2006 says police shot accurately 30 percent of the time. These are shots fired by trained professionals! Of course, bullets don’t just disappear when they miss their target. Handgun bullets, like the 9mm rounds that police commonly use, can continue on past the target for more than a mile.

So not only do bullets not behave like they do in movies, but they go further and with less accuracy, especially in a gunfight. Which means that if people find themselves close enough to a gunfight to film it with their phone, they should probably start running for about a mile until they’re safely behind something solid. The video quality will be worse from that far away, but it’s a small price to pay for being alive to watch the footage.