A neuroprosthetic device lets lab rats see in wavelengths beyond the visual spectrum. 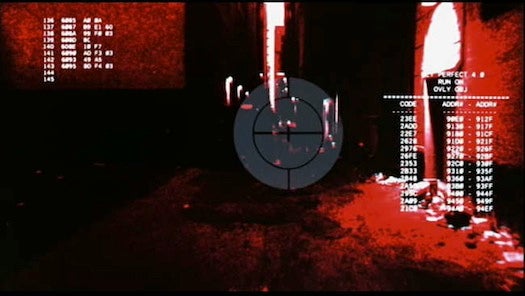 Researchers at Duke university have developed a neuroprosthesis that gives rats the ability to detect infrared light, a portion of the electromagnetic spectrum to which mammals are normally blind.

After training a group of lab rats to visit “reward ports” inside a test chamber whenever LEDs at the ports lit up, the researchers implanted an array of tiny stimulating electrodes into the touch-sensing part of each rat’s brain. The electrodes were wired to to an infrared sensor, which the researchers surgically affixed to the rats’ foreheads.

After reintroducing the rat cyborgs to the test chamber, the researchers began swapping out the LEDs at the reward ports for infrared light sources. At first, when they switched those lights on, the rats would stop and scratch their faces–an indication that their tactile neurons were doing their job as usual and interpreting the electrical signals to mean that something was touching the rats’ whiskers.

But over the course of about a month, the animals began responding to the infrared lights the same way they responded to the LEDs before–by scurrying toward the port with the active light source:

Other experiments, like the light-smelling fruit flies researchers made a couple years ago, have focused on re-programming a single type of neuron to give it a new function. But this experiment seems to indicate that lots of different cell types can work together to take on new jobs without the need for optogenetic interventions: the broad electrical stimulation supplied by the micro-electrodes allowed each rat’s cortex to adapt to performing a new job without losing any of its normal functioning. In other words, the rats could still feel their whiskers, but now they have Terminator vision too.

In a university-prepared press release about the new study, the researchers said that, in the future, cortical neuroprostheses like this could be developed to give animals or humans the ability to see any part of the electromagnetic spectrum or, for that matter, even magnetic fields. “We could create devices sensitive to any physical energy,” principal investigator Miguel Nicolelis is quoted saying. “It could be magnetic fields, radio waves, or ultrasound.”

For this experiment, Nicolelis said he and his colleagues chose infrared radiation “because it didn’t interfere with our electrophysiological recordings” (and not, apparently, because cyborgs in scifi movies always have infrared vision).

The experiment marks another advance in the realm of Brain Machine Interfaces, which could someday be used to restore motion to the paralyzed and sight to the blind, in addition to augmenting human perception in all kinds of weird new ways.