Where Gravitational Waves Are Found: Behind The Scenes At BICEP2

A scientist stationed in Antarctica tells about the biggest scientific discovery of the year, and how to have fun at the Pole. 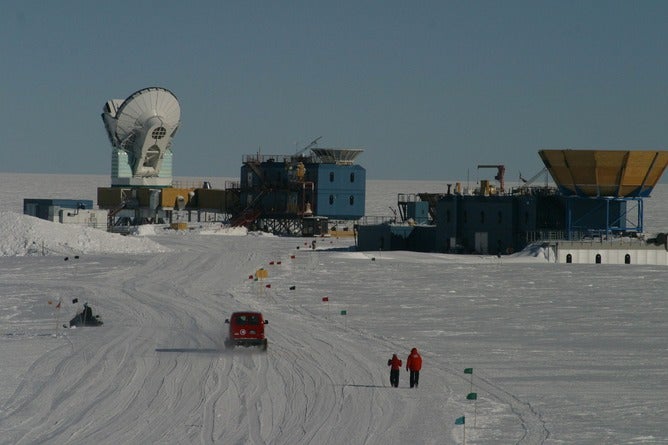 The astronomical instrument BICEP2 was deployed at the South Pole in 2009 to look for evidence that would support the theory of inflation, which tries to explain how the universe looked a trillionth of a second after the Big Bang.

Why the South Pole? Because there the sky is the cleanest and the clearest – no man-made light or radio pollution and minimal water vapour in the atmosphere. These would absorb the signals that the instrument was developed to record. The regions of sky targeted for observation are known to be particularly clear of contaminating microwave emissions from the galaxy and are always above the horizon.

On March 17, headlines around the world hailed the BICEP2 as having made biggest scientific discovery of the year. So what was it like to work on this historic project?

BICEP2 was designed and built at the California Institute of Technology (Caltech), Pasadena. The team was assembled by the late Andrew Lange and then led by Kovac (now at Harvard), Jamie Bock at Caltech, Chao-Lin Kuo at Stanford University and Clem Pryke at the University of Minnesota. I joined the BICEP2 team in 2007, on loan from Cardiff University, as their instrument development scientist. In the autumn of 2009, together with three fellow BICEP2 adventurers (others would follow as the season progressed), we headed out from sunny southern California to the Amundsen-Scott South Pole Station. _Aligning the receiver and camera insert before the telescope tube is lowered onto it. Rashmi Sudiwala_

We first flew to New Zealand, to be kitted out with extreme weather clothing. Then onwards for a stopover at McMurdo Station on Ross Island before heading out to the South Pole. The −50 centigrade air stung my eyes and lungs as I got off the plane. The short walk from apron to station left us gasping for breath: the altitude is 10,000 feet above sea level. The BICEP2 telescope location was only a quarter-mile from the station but the hike felt a lot further the first few times.

It was my second time at the South Pole. I had briefly visited the previous season to help decommission the original BICEP. That experience, coupled with my intimate knowledge of BICEP2, meant I was team leader for the first week. Not that the team needed leading – our collective desire to make the project work was by far the greatest motivator.

For the love of science

There were many tasks to be performed in readying the instrument for service. We didn’t have the option of simply fielding a ready-made, pre-calibrated machine. The telescope shell, camera tube, optics, cooling system, cables (so many cables), and the all-important detectors had to be prepared, assembled and calibrated on site whilst control software had to be written or tweaked. Plus, the detector assembly we actually wanted to deploy was still under test in Pasadena in our test system.

Our first tasks were organising the observatory and checking the telescope mount for wear and tear – polar winters are brutal. With brooms, vacuum cleaners and snow shovels, it was all hands on deck. Shovelling snow certainly gets the heart pounding – so much for taking it easy as we acclimatised to the high altitude!

Over the following days and weeks, crates containing what would become the BICEP2 instrument arrived, along with more team members. The workload was huge and the schedule relentless – the clock was ticking.

We played to each other’s strengths. Team specialists and station staff chipped in doing whatever, wherever, whenever. Trained as a physicist and employed as an instrument scientist and systems engineer, my skills were more general. I had particular expertise in cryogenics (handling really cold things), electronics and control systems. At the South Pole, it seemed as if I only made cables, routed cables, and tested cables. How many PhDs does it take to thread a cable? Five, and then some. _The team at Caltech. Rashmi Sudiwala_

On December 13, 2009, the BICEP2 instrument was ready for action. Procedures honed over a period of two years in Pasadena had been implemented in just three weeks here. By December 16 the system was fully cold, meaning that experiments could begin. Following initial checks, we were able to take our first measurements: first light.

There was never great doubt that the instrument would work – we had all done our homework. But for me there had been a concern. The detectors in BICEP2 operate at a temperature close to the coldest temperature that we can ever reach. To achieve this, we use a fridge that is colder than liquid helium. Back in Pasadena, we had experienced huge problems with running this fridge, but after many long nights I had stumbled upon a solution which seemed promising. With some tweaking at the South Pole, the fridge held its temperature for 85 hours.

Humour at the pole

It helps to have a sense of humour, although sometimes the humour was against us. Like when a colleague’s flight was forced to circle a few hours above the station only to be turned back to McMurdo (our breakfast meeting notes record, “… Angiola still circling overhead”). Medical health is of paramount concern and this was the year the swine flu virus was all the rage. I dutifully took my jabs, only to go down with the most horrendous aches, pains and fever imaginable. After four or five days, groggy and worse for wear, I managed to drag myself to the galley for some food – to others’ amusement.

It was not all work. The station has recreational facilities, including a full-size sports gymnasium and music room. There was a wealth of talent amongst the station staff and scientists from other experiments. You might find yourself attending impromptu classes in everything from photography to flamenco dancing. There are other experiments at the South Pole: IceCube, the South Pole Telescope, meteorology and a self-sufficiency experiment for long-duration space missions. Everyone liked to show and tell, with open-days and seminars. My highlight was one given by a film crew shooting the BBC’s Frozen Planet documentary, and I was thrilled to bits to have met Sir David Attenborough.

By mid-January most systems had come together. There was still much to do in terms of testing and calibration, but on January 18 it was time for me to leave. After lunch, with a stiff upper lip, it was a manly handshake for the men, a warm hug for the ladies, and with that my Polar adventure came to an end.

Fruits of our labour

It was known from the outset that my role was to get the instrument built, tested and deployed. It was thrilling to see the first light data in December 2009. But I’m no theorist or data analyst. I remained on the BICEP2 mailing list, and from a distance, kept in touch with the program as data accumulated. Data analysis started from the outset and there was a long wait for the statistical noise to average down. The mood of the team, rising and falling with every new problem encountered and solved, could be judged from the email traffic. The BICEP2 data analysis team is a small, tight-lipped group. I knew perhaps a year ago that there was talk of possible primordial gravitational wave detection by BICEP2 but I was taken completely by surprise of news of the imminent media release from the Harvard press office.

To think that this machine, of modest size, located in the harshest of environments, was so sensitive and characterised to such exquisite detail that from it we could extract the faintest of signals from the farthest reaches of the Universe and the tiniest fractions of a second after the Big Bang is amazing. That this signal itself represents compelling evidence for inflation, arguably one of craziest scientific theories describing the birth of our universe, is staggering. And there will no doubt be more revelations to come.

My thanks to the late Andrew Lange, John Kovac and the BICEP2 team for allowing me to work on the program; to the NFS, USAP, JPL, Caltech, the Moore Foundation and the Keck Foundation for funding the program; and to Peter Ade and Cardiff University for granting me leave.