Light drinking may prolong your life—but it's more complicated than that. 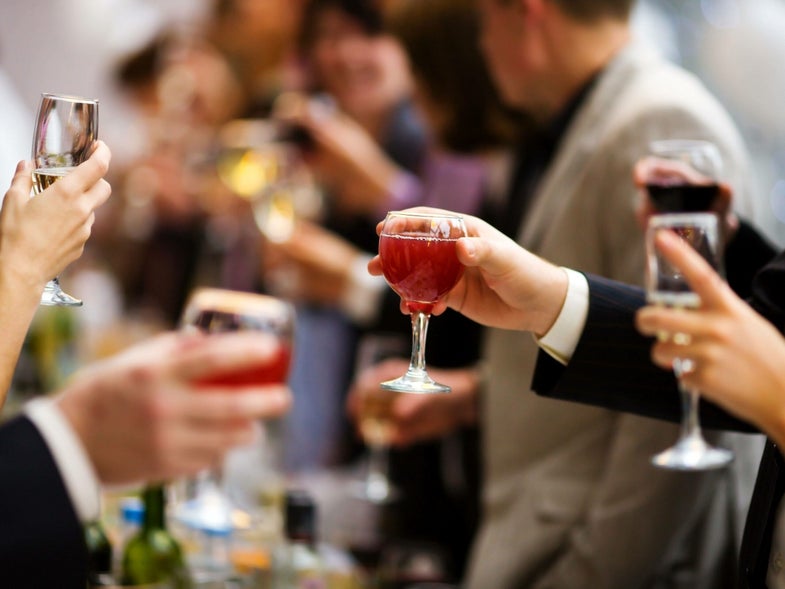 There’s a lot of lifestyle practices that are clear cut: Eat fruits and vegetables, exercise, and reduce stress to stay healthy. Do more indulgent things, like eating ice cream, in moderation. Don’t start smoking, and take steps to reduce the cigarettes you smoke each day if you’re already addicted.

But other behaviors, like drinking alcohol, are far less explicit. Despite the ubiquity of alcohol consumption, epidemiologists and other health researchers still haven’t figured out how alcohol and overall health mix. Is one drink okay—or perhaps even beneficial—or is it too much?

A study out this week in the journal PLOS Medicine attempts to add to the existing (and often confusing) body of knowledge. The 10,000-person study found a similar conclusion to ones like it in the past: Average alcohol intake and mortality (which basically means the likelihood of dying while scientists are still studying you) form a J-shaped curve; light drinkers had a lower risk of death compared to heavy drinkers, but they also had a lower mortality rate than people who never drank at all.

However, unlike previous investigations, this study went one step further, and broke down the risk of death into separate categories: Risk of death from cancer, cardiovascular disease, and overall mortality (from all causes). In doing so, the researchers attempted to answer a still burning question about alcohol consumption and mortality. While alcohol and overall mortality show this J-shaped curve, other studies show that light to moderate drinkers have a slightly increased risk of cancer. In other words, a drink a day might make you less likely to die of heart disease than teetotaling peers, but it might also make you more likely to get cancer than those who abstain. “This has given confusing public health messages about the health implications of light and moderate alcohol drinking,” says Andrew Kunzmann, an epidemiologist at Queen’s University in Belfast.

When broken down, the researchers found that that slightly lower risk of death with light drinking—which gives the graph its characteristic dip and J shape—didn’t exist when looking at cancer as a cause of death. Instead, both cancer risk (which measures newly-diagnosed cases) and cancer-related death both rose steadily with increased alcohol consumption.

“The combined risk of death and developing a number of cancers is lowest in light drinkers, consuming less than one drink per day, and increases with each additional drink per week,” says Kunzmann.

The association between alcohol intake and mortality is nothing new, and no one study can make general, sweeping conclusions. Rather, researchers say, the new study’s results should be taken in context of the already large body of literature, says Graham Colditz, an epidemiologist at the Washington University School of Medicine who was not involved in the research. “Overall, this is a strong study,” Colditz says. “And is important as it shows cancer risk increasing with each additional drink.” And that, “no level of alcohol intake is safe for cancer risk.”

The study also provides further information that will help to unravel where the overall decrease in mortality associated with light to moderate drinking comes from. Previous studies have already found a connection between light to moderate drinking and a lower cardiovascular disease risk. And Colditz and Edward Giovannucci, an epidemiologist at Harvard, both agree that this study adds support to the cardiovascular benefits of of moderate alcohol. But no one is quite sure what mechanism enables this apparently protective effect, or whether there’s some unknown correlation between light drinking and heart health that has nothing to do with alcohol itself.

However, the risk of cancer with increased alcohol intake should not be taken lightly, the researchers say. In the United States, the government’s dietary guidelines for Americans recommend moderate drinking at most, which the governing body defines as up to one drink per day for women and up to two drinks per day for men. Focusing on low levels of alcohol intake, as opposed to comparing binge drinkers and those who don’t drink at all, could help researchers understand the adverse effects of light drinking on a person’s risks of developing cancer, says Washington University’s Colditz. And that could mean we find evidence that the threshold for healthy drinking should get nudged even lower.

The United Kingdom, Kunzmann points out, recently reduced its guidelines, which recommended that both men and women not exceed 14 units per week (roughly equivalent to six drinks). “Our findings suggest that combined risk of cancer and mortality is lowest in individuals drinking less than six drinks per week,” Kunzmann says. “We hope that our results start the conversation in other countries about whether current guidelines should be reduced.”

In the United States, recent news shows that the stakes surrounding alcohol and health are high. Just this past week, a large NIH study—supposedly nicknamed ‘Cheers’ and initiated to understand whether a drink a day truly does provide a cardiovascular benefit—was shut down amidst knowledge that most of the money for the study came from major alcohol companies themselves, invoking a large conflict of interest.

Still, researchers note that we have a lot left to figure out about how alcohol consumption and mortality applies to people on an individual level. Understanding each person’s cancer risk will come down to factors like family history, smoking status, and even gender—not just alcohol consumption. But because lifestyle behaviors are personal, changeable choices, studies like these are crucial in order to empower us all to make informed, healthy decisions.

As such, says Kunzmann, “the results do suggest that if individuals do choose to drink alcohol, that drinking that second glass each night shouldn’t be done for health reasons.”