Eating healthy isn't about eliminating sugar—it's about having a plan. 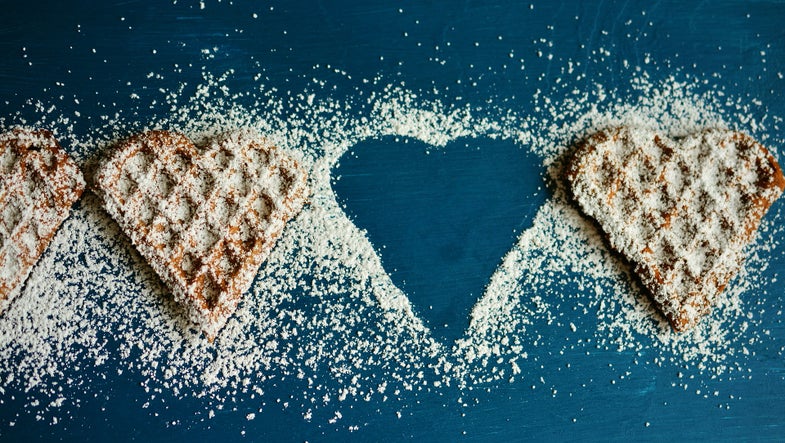 Not even the most optimistic of nutritionists thinks you’ll never touch a piece of cake again. We may assume those who teach people to eat for a living would believe in the elimination of all junk food, but the reality is that even the pros know you’ll cave sometimes. And that’s okay. You just gotta have a plan.

“Eating is a rest-of-your-life thing,” says Teresa Fung, a professor of nutrition at Simmons College. That means whatever your diet plan is, she and other nutritionists want you to be able to stick with it long-term. Unless you have god-level willpower, you’re not going to be able to resist sugar forever—and in fact, nutritionists don’t want you to. Fung explains that regardless of the diet you pick, if you go off of it once you’ve lost whatever weight you want to shed, you’ll just end up gaining it back later and losing the benefit of dieting in the first place. It’s far better for your long-term health to learn how to make better choices than it is to diet intermittently.

Here are a few tips that Fung recommends to eat healthily while still making room for your favorite cookies.

“Don’t do it in the heat of the moment,” says Fung. Instead, decide up front how many treats you’re allowed to have each week. By treats, of course, we mean things that are definitely not good for you. We’re not here to quibble about how often you should swap out pasta for brown rice; this is about how to handle junk. And avoiding junk doesn’t have to be about losing weight or eating as few calories as possible. Even if you’re just trying to maintain a balanced, healthy diet full of a good mix of carbs and fats, you should still be mindful of things like pastries and candies. And Fung says that simply keeping tabs on your indulgences can go a long way.

This sounds obvious, but people often don’t realize how much willpower they have at their disposal. The psychological reward of sticking to your plan will motivate you to keep on sticking to it, and as a bonus you’ll also start to chip away at your junk food habit. If you always reach for a doughnut when it’s offered, you’ll start to do so automatically—you won’t even think about it, you’ll just take the food. But if you can anticipate the reward of sticking to a diet plan, you can resist the habit and eventually break it.

Just make sure your plan is realistic. Fung recommends starting with something you know you can hit—maybe that’s three times a week you can indulge, maybe it’s six. Once you’re on the plan, slowly start to decrease the number of treats. A gradual decline won’t feel so sudden, which will mean you’re likely to meet your goals. The thrill of success will provide the positive feedback loop you need to stick with it—perhaps even long enough that you’ll stop craving sweets in the first place.

Some people crave sweets so much they’ll wolf those occasional treats down in a few bites, Fung says, and then they end up disappointed when it’s over so fast. Her advice? “Eat it slowly. Really, really taste the cookie. Enjoy it. Stretch it out.”

On top of satisfying your psychological craving, the physical act of chewing helps you feel more full. In a meta-analysis of mastication studies, most experiments found that prolonged chewing—whether it be more chews or pauses between bites—made participants feel more full and decreased their desire to eat. That meant a tendency to eat less of whatever food they were indulging in. It’s the same phenomenon that makes you eat more when you dine in front of the television—you’re not thinking about the food. Distracted eating is over-eating. Pay attention and you’ll consume fewer calories. It’s not about cutting out cookies; it’s about getting more cookie bang for your cookie buck.

If cutting down on calories is your primary goal, you might be tempted to skip other food in order to make room for your unhealthy treats in the plan. But Fung says this is a mistake, because your self-control is at its lowest when you’re hungry. Your blood sugar levels have dropped, which means your brain isn’t at its most rational, and you’re probably in a bad mood. This is when you’re most likely to overindulge. That’s why Fung says “junk is for once you’re full.”

Obviously no one is suggesting you go to town on some ice cream when you’re already full to bursting from a meal of veggies—you can save some room for the good stuff. But if you make sure to eat treats after real food instead of when you’re super hungry, you’ll make better choices about which foods to eat. Plus your ghrelin levels (the hormone that makes you feel hungry) will have dropped, which will decrease your overall desire to eat.

And if you’re looking for the optimal time to eat a post-meal cookie, studies of insulin fluctuation suggest having dessert for breakfast might not be as wild as it sounds. That’s when insulin levels are highest, allowing your body to turn that sugar into fuel rather than store it as fat, which it tends to do in the evening when your insulin drops. So go ahead and have that pound cake—just do it after you throw back some eggs.