You can do more for your health. And it’s not that hard. 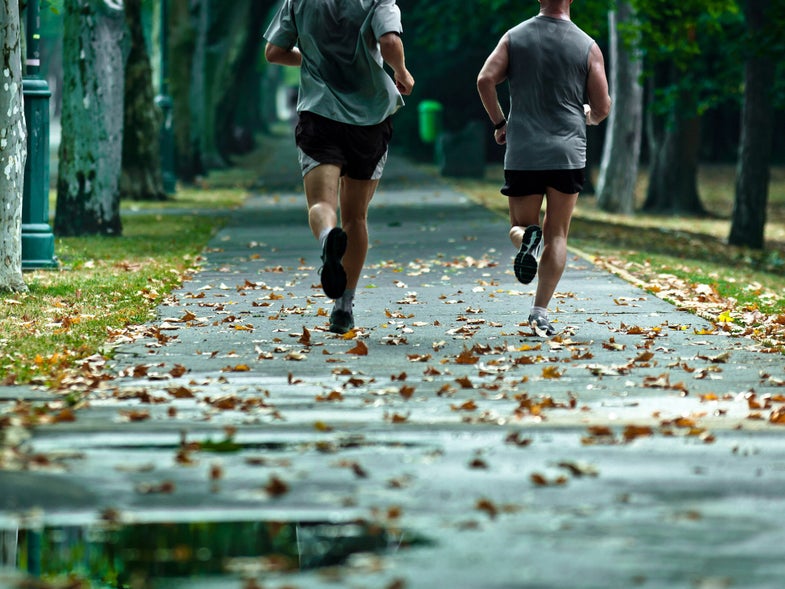 30 minutes of moderate to vigorous exercise a day is one of five lifestyle factors that scientists say can lead to a longer life past age 50. Deposit Photos
SHARE

Eat healthy foods. Exercise regularly. Don’t smoke. We hear these instructions from doctors, friends, parents, and strangers on the internet so often that the words start to lose their impact. And let’s face it, healthy habits are hard to adhere to. But perhaps if there’s proof they work, then they might be easier to swallow.

In a study in the journal Circulation, researchers studied five lifestyle factors that influence how long humans live. They researchers calculated that people who adhered to five things—drink no more than one glass of alcohol per day (two for men), maintain a healthy body weight, eat a high-quality diet, abstain from smoking, and exercise at a moderate-to-vigorous pace (think a brisk walk, at least) for 30 minutes or more a day—had a greater chance of living longer past age 50. Women who followed all five practices lived 14 years longer, on average, than peers who didn’t adhere to any of them. Men lived 12 years longer under the same conditions.

We are generally doing a pretty good job of keeping each other alive. As a nation, we are living far longer than we ever have in the past. Epidemiologists often judge life expectancy as the number of years you live after you reach the age of 50. Prior to that, deaths are often from diseases not associated with getting older like—like accidents or chronic illnesses such as cancer. Today, the average age that people who make it past 50 live is 83.3 for women and 79.8 for men. By many standards, that’s a good long life. In 1940, the life expectancy for all Americans was just 62.9 years. By 2000, it had reached 76.8, and then 78.8 in 2014.

Much of that jump can be attributed to improvements in the standard of living across our country, the fact that far less Americans nowadays smoke, and the great discoveries we’ve made in medicine.

But here’s the bad news: Despite our vast improvements over the last century, when we compare our current life expectancy to that of other rich nations, we aren’t doing so great. In fact, we have a shorter life expectancy than nearly every other wealthy country in the world. There are obviously other factors that could be at play. For one, the United States is the only rich country in the world that doesn’t provide universal health coverage to all its citizens. Access to healthcare is a known factor that contributes to prolonged health, infectious disease prevention, and chronic disease prevention and management. But the researchers behind the new study argue that America could get closer to the lifespans of other nations by making certain changes in their lifestyles.

The five that they found are what they call low-risk lifestyle-related factors. To identify them, they analyzed data from two large longitudinal studies—the Nurses’ Health Study and the Health Professionals Follow-up Study. These are projects that follow people’s lifestyles and track their health for a number of years. These took place for around 30 years, starting in 1980 and ‘83 and ending in 2014. Here’s the five conclusions they found, and the scientific evidence we have to support on each one.

To understand the influence of weight, researchers focused on people’s body mass index, or BMI. That number is a comparison of a person’s height and their weight. You can calculate your own by dividing your weight by your height squared. BMI can be tricky, though. Doctors use it to get a rough estimate of body fat, but for any one individual person, it can be fairly inaccurate. Athletes with high levels of muscle or elderly people with low levels of muscle can get BMIs that do not represent their level of body fat, and not all fat is created equal—some people carry their extra weight in more dangerous places than others. However, when the population number you are studying gets high enough, the outliers average out and BMI paints a far more accurate picture, though still not a perfect one.

What the researchers found was not incredibly surprising. People with BMIs between 18.5 and 22.9 had a higher chance of living longer than those who had BMIs outside that range.

We pretty much knew this already, and it makes sense. Carrying around excess fat can change the way your cells work, causing conditions like type two diabetes, and make more work for your cardiovascular system, which eventually makes you more susceptible to high blood pressure.

The cool thing about body weight, though, is that even small levels of weight loss can mean big differences in health. Research shows that losing just 5 to 10 percent of your body weight can significantly reduce the risk of cardiovascular disease. More weight loss can lead to an even greater reduction in these risks—up to a point. Being too thin can be detrimental to your health as well. For example, not having enough fat can prevent the movement of hormones throughout the body. That’s why it’s important to work with a doctor when attempting major weight loss.

The researchers also found that people who consumed a moderate amount of alcohol had a better chance of living longer than those who were heavy drinkers. They defined moderate alcohol consumption as five to 15 grams per day for women and five to 30 grams per day for men. According to the National Institutes of Health, a standard drink contains about 14 grams of pure alcohol. That equates to 12 fluid ounces of beer, eight of malt liquor, five of table wine, and 1.5 of distilled spirits.

The available evidence around moderate drinking is tricky. Researchers have solid evidence to say that heavy drinking can absolutely be detrimental to your health. But the line between moderate drinking and abstaining from alcohol altogether is fuzzy. Whether people who moderately drink fare better than people who abstain is even murkier. We still don’t have a solid study with enough participants to back that up. For now, it’s safe to say that moderate drinking will not cause you severe harm, but whether it’s better for your health than abstaining remains to be seen. If you’re trying to make the absolute best health decisions based on the available evidence, the smartest move is probably to drink very little or not at all.

Over the past 100 years, we’ve gotten really, really good at understanding the mechanisms through which the human body works, and engineering medications that fix things when various bodily functions go awry. But in the process, we’ve mostly neglected the preventative health benefits of simply adhering to a healthy diet.

To understand the influence of the foods the participants ate on their health, the researchers used something called the Alternate Healthy Eating Index Score. It breaks foods down into their various components. For example, lasagna can break down into ground beef, ricotta cheese, onions, and so on. The cheese is further broken down into a dairy component and a fat component. Points—on a scale of one to 10—were assigned to the participants; a 10 meant total adherence to the recommended servings of fruits, vegetables, whole grains, red meat, sugar, and so on. Those recommendations are already associated with a reduced risk of various diseases like heart disease and diabetes.

Participants who scored in the top 40 percent were deemed healthy eaters. Nutrition studies are, of course, hard to do because of all the other factors that could contribute, like exercise, stress, and environmental factors. And human test subjects are notoriously bad at accurately reporting their own eating habits. But, there’s good research to show that poor diets have a direct influence on various factors like blood pressure, cholesterol levels, and body weight. To date, the best diet to follow is probably the Mediterranean diet, however, if you focus on eating a variety of whole, unprocessed foods most of the time, you are doing great things for your health. Just find a nutritional plan you can stick to—enjoying unhealthy things occasionally in moderation is much better than periodically failing hard at your strict diet.

We used to think smoking was benign, or even good for us (thanks, tobacco lobby!). Doctors smoked and often recommended cigarettes to their patients to reduce stress or lose weight. But those days are long over. Solid evidence shows smoking significantly increases your chances of lung cancer as well as other lung and heart diseases. The decline in smoking over the past 50 or so years is a major reason the average lifespan in America has gone up. Let’s not ever reverse that. If you want to live longer and you’re still smoking (or vaping, for that matter)—well, that doesn’t make much sense. Do whatever you can to stop.

In the study, researchers found that those who exercised for at least 30 minutes a day at a moderate to vigorous pace (including brisk walking) were in the lowest-risk group for developing certain diseases later in life, and thus they had the potential to live longer.

Exercise does two main things: it boosts metabolism and contributes to weight loss or weight stability. Those two factors significantly increase your chances of living longer. But researchers are finding a whole bunch of other things that happen in your body when you exercise, like the creation of new heart cells and an increase in bone strength. One recent study suggests that even if you have a family history of heart disease, exercise can reduce your risk. Working out can boost your mood, too. Trying to remember how good you will feel after you exercise could help you get going.

The key takeaway from this study is that the more of these lifestyle factors people adhered to, the more likely they were to live longer after hitting 50. However, the researchers say, this is on a population level. To better understand people on an individual level, the researchers want to study smaller groups with known certain conditions, like those who had been diagnosed with cancer previously or those with known cardiovascular disease. How large of a benefit do these five lifestyle factors have on those specific populations? More of those studies will help researchers and doctors determine what you should do to live a long and healthy life. But in the meantime, you’ll have a hard time finding a doctor who will tell you not to follow the practices listed above. So let’s get cracking.