Different kinds of alcohol might make you feel different emotions

And figuring out why and how could save lives. 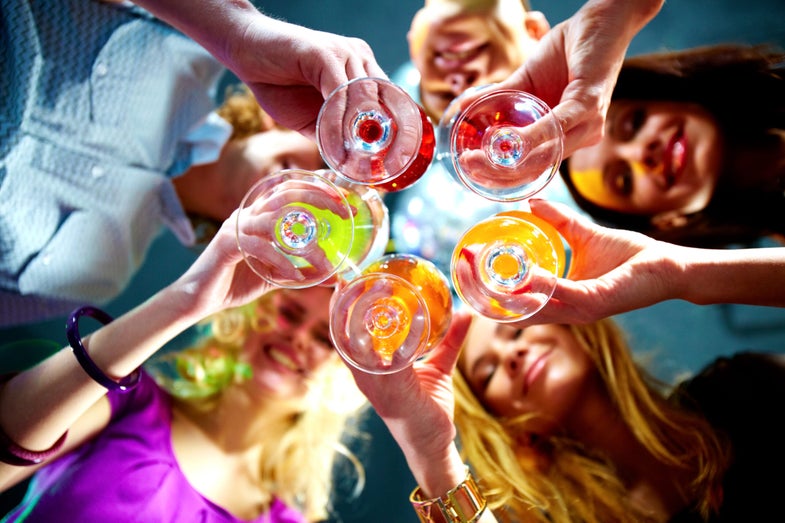 Are you feeling confident, or just sleepy?. Depositphotos
SHARE

Humans have been buddies with booze for thousands of years. Some scientists believe this love affair goes back even further. The so-called drunken monkey hypothesis speculates that our ancestors possessed an unusual knack for consuming ethanol without keeling over dead, allowing them to access the sweet, sweet caloric payloads of rotting, fermenting fruit. But we’ve come a long way from merely tolerating overripe apples. These days, alcohol factors into our social interactions, our most cherished cultural ceremonies, countless classic poems, songs, paintings, and plays. And save for some occasions when we sip an elixir to fulfill a religious rite, we drink alcohol for one main reason: it makes us feel good.

But how exactly does it make us feel? According to a recent study in the British Medical Journal’s BMJ Open, different types of alcohol can actually inspire different emotional responses. Hard liquors made almost half of all participants feel “sexy,” for example, while more than half reported feeling relaxed when drinking red wine. Drinking spirits was far more likely to elicit feelings of aggression, illness, restlessness, and tearfulness than wine or beer.

“There is plenty of promotional material—through advertising, for instance—to promote the positive emotions people might look for from drinking,” says study co-author Alisha Davies, head of research and development at Public Health Wales. “But we thought it was also important to better understand the negative ones as well. If we are to help people make informed decisions about their drinking, they need to know the full picture of how alcohol affects moods and emotions.”

Davies and her colleagues also hoped to figure out who might be most susceptible to those emotional changes. Previous research has suggested that people with alcoholism might process emotions differently than those without an addiction. One study found men dealing with alcoholism to possess less empathy, and another seemed to show that people addicted to alcohol actually have decreased emotional processing in parts of the brain. The new study didn’t actually examine brain development and behavior, but figuring out how heavy drinkers relate to alcohol on an emotional level could give scientists key pieces of this puzzle.

Some of the study’s findings—which draw from around 30,000 individuals aged 18-34 who completed the Global Drug Survey, an online anonymous questionnaire promoted in 2015—aren’t exactly shocking. For example, 53 percent of respondents reported that red wine made them feel relaxed. There’s a physiological explanation for this; red wine contains high levels of melatonin, the hormone that tells our brains it’s time to go to bed. A solid 50 percent of subjects reported that beer relaxed them, but the carbohydrates therein also have a reputation for making folks drowsy. Only around 20 percent of drinkers said spirits had the same effect.

When it came to other positive emotions—feeling energized, confident, relaxed, and sexy—hard liquors really kicked the competition to the curb. Over 58 percent of subjects reported feeling energized after a drink of spirits, 59 percent reported confidence, and 42 percent felt sexy. Beer proved to be the least sexy drink (bloat, anyone?) with just 19 percent of survey-takers reporting such an effect. But with 45 percent reporting a confidence boost, 25 percent feeling energized, and 50 percent enjoying a relaxing buzz, beer belly doesn’t sound too bad. Red and white wine both hovered around 28 percent and 25 percent for confidence and sexiness, respectively, but while 15 percent of white wine drinkers felt energized, only half as many red wine drinkers reported the same. And white wine had just a third of drinkers relaxed, compared to red wine’s half.

But spirits start to look less appealing when you consider the negative emotions they elicit. Davies and her team looked at reports of tiredness, aggressiveness, illness, restlessness, and tearfulness. While beer and red wine did indeed make subjects sleepy (39 percent and 60 percent, respectively) and red wine made 17 percent of drinkers feel teary, wine and beer otherwise got pretty low scores for these drawbacks.

Hard alcohol, on the other hand, apparently made nearly a third of drinkers feel aggressive (less than 7 percent of beer drinkers and 3 percent of wine drinkers reported the same) and at 48 percent, it made more than twice as many feel ill as any of the other forms of alcohol. 28 percent reported feeling restless after drinking hard liquor, compared to less than 10 percent for all other libations, and over 22 percent reported feeling tearful. Tell that to the next guy who makes a crack about ladies getting weepy over glasses of rosé.

But what does this all mean, and why should we care?

For starters, no one is sure exactly why the study subjects had these responses. With nothing but a filled-out questionnaire, scientists can only speculate. It’s possible that people are reacting to different, non-alcoholic components that go into these beverages (like the melatonin in red wine, for example) or even to substances in the liquid we tend to mix those beverages with. Different drinks also generally get drunk in different settings, and in different ways. If you usually drink wine with dinner (or sitting on the couch with a pint of ice cream, as the case may be), then of course you associate it with relaxation and sleepiness. Hard alcohol consumed quickly during a wild night out, especially with caffeine mixed in to keep revelers awake, is bound to have a more energizing, aggression-inducing response than a pint of beer. Without more data, there’s no way of knowing exactly why certain alcohol makes us feel a certain way.

That’s why Davies and her colleagues are more interested in figuring out how emotional effects differ from person to person. They believe this could help them to better understand what causes alcohol dependency, and how a cycle of excess alcohol consumption can affect the drinker. As of 2015, 6.2 percent of American adults (15.1 million individuals) had Alcohol Use Disorder, as did hundreds of thousands of adolescents. Globally, alcohol causes 3.3 million deaths a year, and 5 percent of cases of ill health and injury are directly attributed to alcohol consumption. But to keep alcohol from harming us, we need to understand why people seek it out.

“Increasing our understanding of how alcohol affects moods and emotions, and the complex emotive relationship we have with alcohol, helps to inform our approach to addressing factors which influence our decisions about drinking,” Davies says.

But heavy drinkers were also six times as likely to experience aggression when drinking, and were also much more prone to imbibing drinks they associated with aggression and tearfulness.

To Davies and her colleagues, this suggests that people dependent on alcohol seek out the positive emotions they associate with particular drinks even knowing that they’ll pay the price of stronger negative emotions.

“Our findings suggest that especially people who are heavier drinkers may be expecting, or perhaps even relying, on certain drinks for energy and confidence. But heavier drinkers are also much more likely to report those negative emotions as well,” she says. “This risks a dangerous spiral where drinking may be seen as a solution to some emotional problems which it is actually aggravating.”

In fact, the authors note in the paper, it’s possible that dependent drinkers are actually influenced by what they believe to be an understanding of their disease. If they’ve been taught that addicts use alcohol as a coping mechanism, rather than as the source of pleasure that more casual drinkers enjoy, they may be more willing to ignore feelings of sickness, sadness, and anger as a necessary side effect. Meanwhile, advertisers highlight the positive emotions associated with drinking, which may make individuals more likely to minimize the downsides when choosing to imbibe.

The researchers hope to use future studies to examine why people choose to consume specific drink types in different settings, how mood prior to drinking factors in, and the different effects of various alcohol in various volumes, combinations, and mixers. Eventually, they might collect enough data to figure out just which situations are most dangerous for dependent and would-be dependent drinkers, and how public health officials might cut down on alcohol-related injuries and death in more casual consumers.

“This study may also remind people that the emotions and moods they may be looking for from drinking may not always be the ones they get,” Davies says.