Donated organs rarely spread disease, thanks to these protocols

Here's how the screening process that prevents disease transmission in donated organs works. 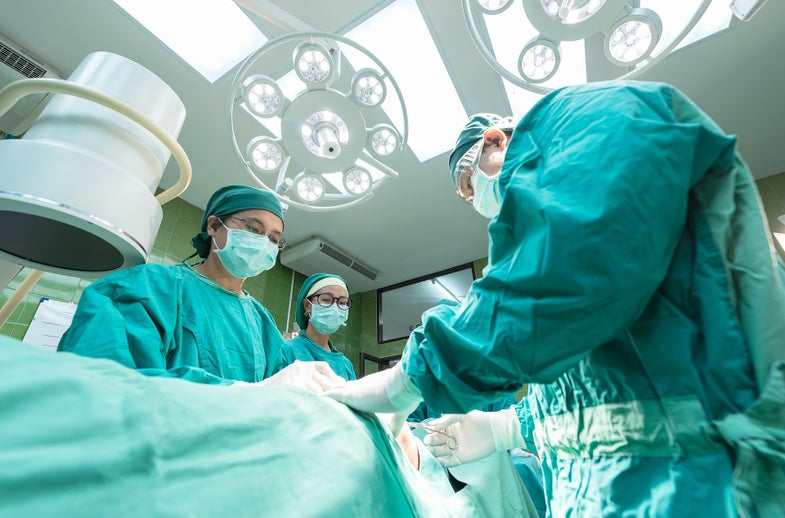 But surgery is still the right call for some. Pixabay
SHARE

Last week, many news outlets reported that four people in Europe developed breast cancer after each received organ transplants from the same donor in 2007. Three have died from the disease so far.

The case report that detailed these findings, originally published in the American Journal of Transplantation earlier this year, explains how after a 53-year-old woman died of a stroke, she donated her heart, kidneys, liver, and lungs to four different transplant recipients. While the donor had no documented history of cancer when she died, DNA tests confirm the cancers in the recipients originated in the body of the donor.

Cancer spreading from a donor to a recipient is “extremely rare,” Dr. Frederike Bemelman, the author of the report, told CNN. Only about one in 5,000 people who receive a transplanted organ will get cancer from that organ.

But there is always an unknowable risk, says Nicole Ali, a transplant nephrologist at NYU Langone’s Transplant Institute. Infection and cancer are a constant concern. To protect patients and try to transplant as many donated organs as possible, specialists weigh the possible risks and benefits of each heart, lung, liver, intestine, pancreas, and kidney.

There’s a chronic shortage of donated organs in the United States. In 2016, more than 7,000 people died while waiting for an organ transplant, according to the United Network for Sharing Organs. This year, there are more than 114,500 people on the transplant waiting list. Only 24,000 have received new organs so far this year from 11,600 donors.

Once they receive a transplant, these patients take immunosuppressants—drugs that dampen the response of the immune system—to prevent their bodies from rejecting the new organs. Unfortunately, this makes transplant recipients much more susceptible to the rapid spread of cancers and viruses—including those that may lurk in their lifesaving new tissues.

To minimize risk, each donor goes through a careful screening process. But it’s easier to test living donors than deceased ones.

Healthy, living people can donate a kidney or part of their liver or, in rarer cases, a lung. Before these people go into surgery, however, they undergo rigorous testing as doctors try to learn everything about their bodies and medical history. The Organ Procurement and Transplantation Network sets the guidelines for all organ donations and recipients in the United States.

“We try to screen the living donors as much as humanly possible,” says Ali.

Doctors screen women for breast and cervical cancer and men over the age of 40 to 50 for prostate cancer. Anyone over the age of 45 (the guidelines recently moved up 5 years) will have to undergo a colonoscopy. Physicians will look out for skin cancer, abnormal blood work that could indicate something rarer like leukemia or lymphoma, and evaluate the health of the kidney or liver itself. If someone has a family history of lung cancer, they’ll check for that too, says Ali.

No one with an active malignancy or an inadequately treated cancer can donate an organ. But doctors approach people with a history of cancer on more of a case-by-case basis, with the transplant specialists consulting with oncologists to evaluate the risk of transmission.

For example, someone with a history of basal cell skin cancer would likely still be able to donate, says Ali, because basal cell is a simple cancer that rarely spreads to other parts of the body. Melanoma, on the other hand, tends to come back within a five-year window, so history of the disease tends to rule out a potential donor. Only if someone had been in remission for a long period of time—upwards of 15 years—would doctors consider it.

With diseases like breast cancer, it depends entirely on the type, whether and how much the cancer had spread throughout the body, and how long it’s been since cancer was treated without a recurrence, says Ali.

“With the living donor you have the benefit of time, and doing all this screening takes time,” says Ali. While there is still risk of disease or infection , doctors at least have time to do their homework.

“Some cancers have a very low risk of recurrence, or [happened] so long ago it’s not unreasonable to consider using those organs,” says Ali. “And cancer does rule out many, many organs, especially in the deceased donor population.”

With a deceased donor, someone who elected to be an organ donor and has been declared brain dead but hasn’t yet been taken off life support, everything happens much faster. Physicians have to quickly ask for the consent of the family, then harvest the organs and transplant them into the recipient. Many organs can only survive for a very short time out of the body, Ali explains. The doctors have to rely on the person’s existing medical history and information from family members.

In the case in Europe, the donor had no history of cancer or visible signs of disease when she died. The authors hypothesize the donor could have had micro metastasis of cancer throughout the body—cancer cells so small they went undetected during the woman’s life.

The authors of the report debate whether performing a CT scan on the body would have caught the cancer. If the micro metastasis theory is true, it likely would not have. There are many cancers a CT scan cannot detect, says Ali, but the machine could pick up on non-cancerous lesions that could rule out a donation unnecessarily. The author’s echoed these concerns in their report. Postmortem CT scanning, they warn, could shrink “the already scarce donor pool.”

Trying to treat as many people as possible as safely as possible is something transplant physicians have to think about every day. These complex considerations are all the more important in places like New York City, which has one of the lowest organ donation rates despite being one of the most populated cities in the country, says Ali.

“Everything we do in medicine is a balancing of risk and benefit,” she says.